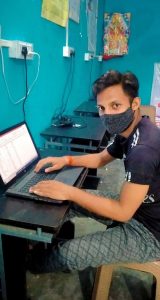 Nayakdih is a village on the outskirt of Uttar Pradesh where teens like Harsh are interested to learn about digital technologies- mobiles, computers, tablets and more. However, the nearest computer-training center is 3 kilometers from his home and they charge Rs. 600 per month, which is a significant amount from his father’s income.

Luckily, DEF’s Smartpur center was established near his village, where the coordinator motivated the teens of his age group to come and learn computers and other modern digital devices.

They were surprised to learn that the training is imparted free of cost at every Smartpur center. Hence, Harsh along with his friends joined the course.

Today, Harsh can operate a computer, use the internet to find answers to his questions, work on excel sheets, make presentations, etc. Harsh proudly stated that “Smartpur centre has provided him a ray of hope to do well in his professional life”.