You are here:
October 27, 2017Leave a commentOsama's Columns in MintBy Udita Chaturvedi 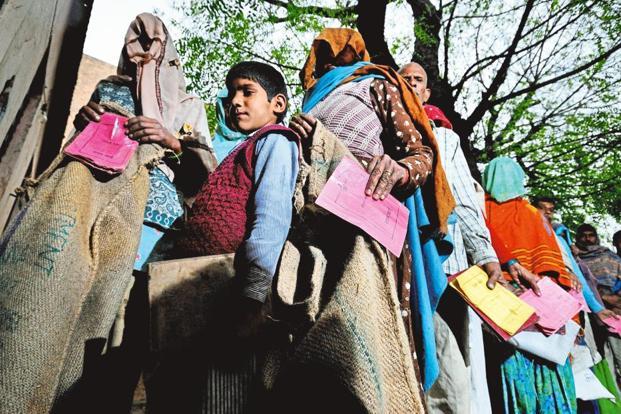 This article was first published in Mint on October 27, 2017.

She died of starvation. She was all of 11 years old, a tribal from Karimati village of Simdega district in Jharkhand. Ideally, she should have at least received one decent meal a day. However, even in school, she often spent her day studying without any midday meal that she was entitled to by the Government of India.

On 28 September, Santoshi Kumari died after starving for four days. Her family had not received its supply of ration, as promised to them under the National Food Security Act, and were dependent on the mercy of their neighbours.

In India, hundreds die every day of hunger. So what makes Santoshi’s death unique? It is because Santoshi did not die due to lack of availability of food but due to the lack of access to available food. She died because her access to ration was dependent on information stored in an online database that required internet connectivity to access. She died because of lack of synchronization between different government databases. She died because the government’s implementation process is flawed. It was death by data for Santoshi.

The young girl’s death is extremely sad. However, this death has brought attention to the consequences of inefficient mass digitisation processes. Let me clarify here that the process of digitisation for delivery of government services is not harmful, but insensitive policies of the government, coupled with poor implementation and flawed security measures, has the potential to end lives.

Born in a poor and impoverished family, Santoshi was among millions of Indians completely dependent on government entitlements that promise our food security to poor citizens. As per the government’s mandate, members of her family had been registered in the Aadhaar database that gave each one of them a unique identity (UID) number; the family was also registered under the public distribution system (PDS) that entitled them to a monthly supply of food grains. Both these databases with citizens’ information are digitised, and are (ideally) supposed to be well integrated with each other.

It is the citizen’s role to visit a local office and submit their Aadhaar and PDS papers for linking of the two; and it is the government’s role to ensure the integration of the two.

Santoshi’s family had done their bit, and were assured of their regular supply of ration. Yet, they suffered.

In an ideal scenario, if a person has linked their Aadhaar with the PDS, they should be able to use either of their government identity cards in a replaceable manner. This means, if I present my Aadhaar card at the ration shop, the government system should be able to recognise my PDS details linked to my UID.

However, when Santoshi’s family visited the ration shop, the database on the local computer refused to recognise Santoshi’s family as one enrolled under the PDS. Even after several attempts, that stretched over more than half a year, the Aadhaar and PDS details could not be matched on the system despite various layers of identification recorded—name, address, UID, finger print and even iris scan. These details can either be matched manually by feeding in the details onto a computer or through a biometric-enabled point of sale (POS) machine. The functionality of both and their ability to match the linked databases is dependent on two major infrastructural requirements: a functional internet connectivity with adequate bandwidth and uninterrupted supply of electricity. Both are often casualties in rural and remote locations of India.

Under a digitized e-governance system, it is the data and not the physical presence of a person that decides whether or not a person is eligible for benefits.

This means a poor person can only access food through a ration shop based on the availability of an Aadhaar card, a ration card, a linked database of the two, a functional biometric-enabled POS machine, uninterrupted supply of electricity and the internet; and unquestionable ability to recognize humans from their data. Once all these requirements are met, the fair price shop must have adequate supply of ration to distribute among the beneficiaries.

But can the government confidently vouch for the quality infrastructure or efficient integration of databases?

Programmes such as Digital India are meant to bring people out of information asymmetry and provide them with a channel to improve their quality of life through access to government services and benefits. However, in the presence of poor policies, shoddy implementation, rampant corruption and unaccountable governance, the marginalised communities are only excluded further.

India does not need its multilayered bureaucracy replicated online to exploit the exploited. The vision of Digital India cannot be achieved unless the government involves smart policy makers to draft visionary policies that leverage digital tools to improve lives rather than make the lives of the rural poor even more complicated and deprived than they already are.