You are here:
September 15, 2017Leave a commentOsama's Columns in MintBy Udita Chaturvedi 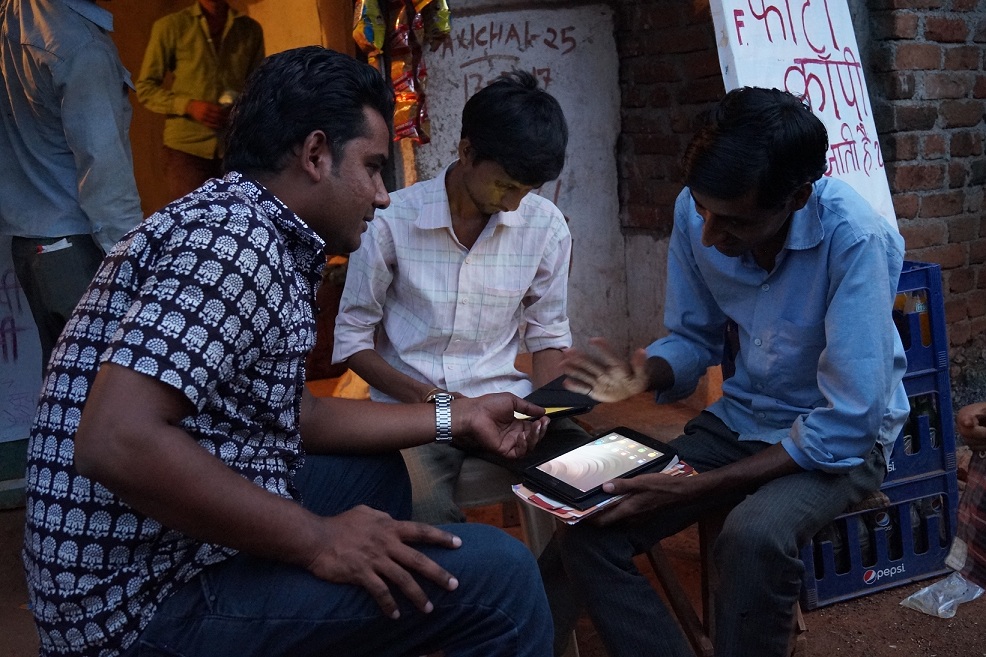 This article was first published in the Mint on September 15, 2017.

Can a video call save life? Can a tablet convert you into a change maker in a village where nothing works?

Let me tell you about SoochnaPreneurs (information agents), as we call them, making a lasting impact on individuals, families and households, one village at a time.

Earlier this year, I had the opportunity to meet Anjali Kumari, a motivated 25-year-old woman who is a champion for some and a threat for others. She hails from Angada block in Ranchi district of Jharkhand, where child marriages—despite the laws against it—are not uncommon.

Sometime last year, Anjali received a call informing her that a 14-year-old girl was being forced into marriage in the village. Anjali immediately headed for the venue and asked the girl’s parents to call off the wedding.

When they didn’t agree, she made a video call from her tablet to a local news reporter, seeking his help and sharing glimpses of the ongoing ceremony. The local reporter contacted the regional Childline, a helpline run by the local administration for rescuing children in distress.

Within an hour, officials arrived at the venue and helped Anjali stop the wedding. Initially, the girl’s parents were furious. After all, they had invested all their savings in their daughter’s wedding. However, they were shocked to learn that the police had investigated the girl’s inlaws to be and found that they had already set a deal to sell her to a man in Punjab after the marriage.

When I first heard this story, I was extremely impressed and was curious to know why she had rushed to help. She is neither a social worker nor a government employee. Anjali is a SoochnaPreneur who has been serving her community by enabling access to government entitlements, citizen rights and public schemes through information.

She uses her tablet and her computer to find relevant government schemes for people; helps file and submit applications; and follow up cases with the authorities until entitlements are received by the beneficiaries. She offers this help as a service from her small one-room office where she also offers digital services such as photocopying, printing, scanning and access to the internet. It is through this work that she has earned the trust of many in her village and in nearby villages.

It is wonderful to see how in this digital era, oral society—illiterate, predominantly poor and dependent on government schemes—is taking advantage of the digital revolution to meet daily requirements, access entitlements, document knowledge or bring about change in the society.

There are so many who cannot read and write, but can record or listen to audio or video calls, and share these with others. The digital medium allows people to watch and share news and local scenarios in real-time, across geographies and topographies.

These are the reasons that entitlements are moving online today. However, to access these services people still require some amount of formal literacy and computer know-how. The oral or illiterate society requires an intermediary to provide them with this information and facilitate access to these services. It is known that hundreds of middlemen around the country are exploiting the poor in the name of facilitating services. Common Services Centres (CSCs) were started as a trailblazing scheme. But their success has not touched all regions, especially the deep locations and villages beyond the taluks and tehsils.

Realizing the gap in information availability, Digital Empowerment Foundation along with Qualcomm initiated a project called SoochnaPreneur last year. The project is aimed at creating an army of information agents who will eventually be present at the block level across all the 272 backward districts of India.

Under the first phase of the project, we started with 100 SoochnaPreneurs, each of whom has been trained in handling technology as a tool, dealing with information as a service, interacting with people as agents of change. The emphasis, while training SoochnaPreneurs, is on creating social capital at the village and community levels and encouraging entrepreneurship.

In the months that followed, we have not just seen SoochnaPreneurs transform as individuals, but have also witnessed how they have driven transformation in the communities they serve.

The SoochnaPreneurs have been trained to charge fees only for facilitating a service and not for offering information. For example, they don’t charge for providing information on government schemes. But they do charge for printing an application form for the scheme. They don’t charge for filling up an application form, but charge a nominal fee after the entitlements have been received by the beneficiary.

For all the services offered by SoochnaPreneurs, they can only charge people based on government-approved rates formulated as per CSC’s list of services.

It is through this work that SoochnaPreneurs have become the go-to persons for all kinds of information and help in these communities.

Here, I must mention some civil society organisations which have been running Sahayata Kendras in Jharkhand to offer information services that enable people to access rights and entitlements without any charges whatsoever.

After eight years, their efforts have been recognised by the Jharkhand government which has signed memorandums of understanding (MoUs) with them earlier this year to strengthen them. This highlights the fact that the government too can see the genuine need for credible information facilitation services beyond existing government offices and infrastructure.

This has motivated our SoochnaPreneurs to work harder to be recognised by the government; and quite a few have been allowed by the Rajasthan government to operate from panchayat kendras, gram sabhas or Atal Seva Kendras in Rajasthan where local bodies have placed high trust in them.

The efforts of SoochnaPreneurs, Sahayata Kendras and CSCs broadly prove a point that there is a tremendous need for organised facilitation services for information and information-based products.

Disclosure: The SoochnaPreneur programme is a joint initiative of Digital Empowerment Foundation and Qualcomm.