Providing Financial and Governance Services in Remote Areas of Tijara 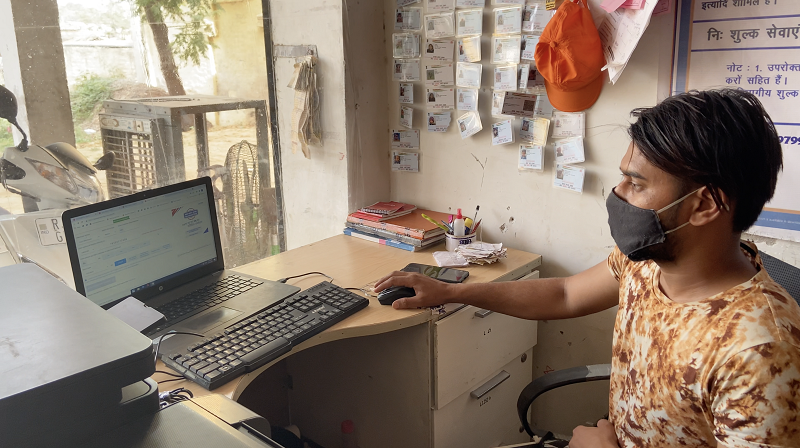 Jakhopur or as DEF likes to say ‘Jakhopur Smart Village’ is a typical rural village in Rajasthan with narrow lanes that turn into narrower lanes that lead to people’s houses. I entered one such lane and was greeted by a cow and three goats. A couple was sitting with their two children and I approached them. The woman was lighting a fire to cook lunch while the man was tending to the animals. The kids didn’t hide their curiosity, they started following me, trying to understand what a stranger was doing in their house compound.

As I approached the man and took out my phone to take a video he said “are you one of the Corona guys?” I wondered what that meant and shook my head and said “no not at all” as it seemed to be something he didn’t like. He didn’t ask anything else, it seemed like that was all the assurance he needed to have a conversation with me. I asked him about himself and he told me his name is Hussain Deen. I enquired about his occupation and he pointed to the cow and the goats. I asked him if he delivers the cow’s milk to the other people in the village to which his reply was “no, the Chaudhary buys it from me.” On probing further, I was explained that the Chaudhary buys milk from all the people in the village and sells it in Tapukra, a town about 7 kilometers from Jakhopur. Hussain Deen added that he was sending his children to the digital centre for computer and digital literacy classes, however, because of the lockdown he didn’t want to risk sending them. He said that once things start to open up his children will again go to the centre to study. I asked him how far the closest ATM to the village is and he said it’s 4-5 kilometers away but he doesn’t have to worry about that anymore. “Earlier withdrawing money would be a time consuming task. I would have to go 4-5 kilometers away and then withdraw money and come back. Now I just step out of my house and go to the centre. They take my Aadhar card and fingerprint and then give me the money. It has made life much easier” he said. While this service is very useful for the villagers, at a time like COVID it has become all the more important as it ensures people receive basic services in their villages itself and they don’t have to travel out of the village and risk exposing themselves to the virus.

After meeting Hussain Deen as I was walking in the village with Shahrukh, DEF’s coordinator for Tijara block in Alwar district, I met Sukhdev Singh. He was going somewhere on his bike and Shahrukh waved at him to stop. I asked him if he would talk to us for five minutes and he agreed. I told him that I wanted to know if the centre was beneficial for the people in the village and he said “it is very beneficial. This is not a question you should be asking. Take me for example, I needed to update my Aadhar card and I had been trying to do it for a very long time, when I went to Shahrukh to get it done, he immediately processed everything and within three days it was updated. I also don’t need to travel all the way to Gailpur (5 kilometers away) to withdraw money, I can get it done right here in my own village. So of course the centre is beneficial.” It seemed like he was almost insulted that I could ask him such a question. I thanked Sukhdev for his time and he smiled and continued along on his bike.

Having walked around the village and met a few beneficiaries we left for Patan Khurd, another village in Tijara block where the DEF has a digitally equipped center. Identifying these digital centres is easy because each of them have a tower that can be seen from a distance, this provides connectivity to that centre. The main connection is at the hub centre, in this case at Jakhopur and the 9 spoke centres get connectivity via line of sight towers that are there in each centre. I entered the small centre where Junaid Khan, the entrepreneur for Patan Khurd was working. A 16-year-old boy, Sahil was waiting for Junaid to update his Aadhar card. “I need the mobile number to be updated” explained Sahil when I asked him what service he was here to seek.

There were posters about the various schemes that the government was offering, Junaid had put them up so that those who wanted to apply for them could ask him to facilitate it for them. I asked Junaid about all the services that he offers.

“I connect people to government schemes, like for example during COVID the free healthcare scheme was launched for BPL families. Apart from this there are pension schemes for senior citizens and widows. So after applying for the scheme, I also withdraw the money for them so that they don’t have to go elsewhere for that. This makes this centre holistic, providing all the basic digital services that people need” he said.

I asked him what alternative the villagers had if his centre was not there and he said “then it would have been very troublesome for them. The nearest ATM is 7 kilometers away and the nearest e-Mitra (governance service provider) is also 5-6 kilometers away. In fact, many people from neighbouring villages also come here to avail of these services as there aren’t any such centres in their villages. another reason they come is that I only charge a nominal fee, so they are able to save money also. If I was charging more no one would come here but since I have so many customers the nominal fee also adds up to be enough for me to sustain myself.”