SoochnaPreneurs are the beacon of hope for uninformed elderly 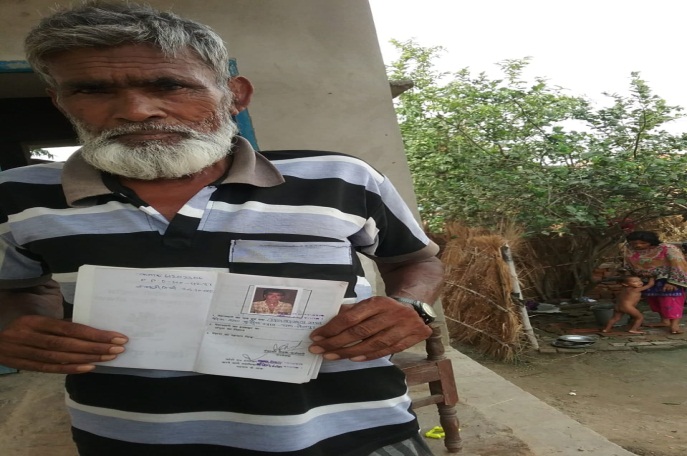 Sixty-six-year-old Anarul Khan lives in a small village of Lauriya in one of Bihar’s most backward districts. The family lives in constant poverty in lack of any active income. One of the major sources of their income is pension that the elderly couple gets from the government. But the family living Below the Poverty Line (BPL) has not even received a penny from the pension in last six months. The elderly couple knocked all doors but all efforts went in vain. But with SoochnaPreneur Shakil Ahmad’s efforts they finally have some hope.

Sixty-six-year-old Anarul Khan lives in a small village of Lauriya block named Telpur in one of Bihar’s most backward districts. He lives with his wife and a son. All three of his children—two daughters and one son—are married. The family lives in constant poverty in lack of any active income.

The son is dependent on agriculture but the income often fluctuates depending on circumstances. One of the major sources of their income is the pension he and his wife get from the government. But the last six months have been inexplicably rough for the family living Below the Poverty Line (BPL) that did not even receive a single penny from the pension. The elderly couple made several visits to the Sarpanch and pleaded in front of him many times to look into their stuck compensation but everything was in vain.

One day, the local SoochnaPreneur Shakil Ahmed was on field, mobilising the people regarding schemes and government entitlements. There, both Anarul and his wife met him. They narrated their problem to him. In no time, Shakil started investigating the matter and after a few days he came to know that due to some missing documents (PAN card, Adhaar card, Bank passbook) their pension application was rejected. Shakil without any delay took them to Block Development Office and filled the form again for their pension and attached the required documents with it.

After few days, they got a message from the Sarpanch notifying that within 10 days they will start receiving their pension again. After 10 days, when he checked his bank account, his elation knew no bounds. Both husband and wife’s account were credited with the pension of Rs 3500 each. They were really thankful to the SoochnaPreneur Shakil Ahmed that because of him, a major problem in their lives got solved.