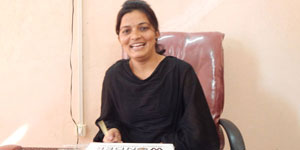 New Delhi, November 28, 2014: The second edition of the ‘Red Rickshaw Revolution’ (RRR 2 ), was launched with an initiative to celebrate the achievements of ordinary women accomplishing extraordinary feats across India.  Beginning the virtual digital campaign, the young woman Sarpanch Anita Sankapale from Bhawan village near Aurangabad was recognized for her commitment towards community development work and addressing basic infrastructure issues like permanent roads, street lights, water supply and sewage system in the village.

An initiative of the Vodafone Foundation, “Red Rickshaw Revolution 2’ (RRR 2)  replicates the spirit of RRR 1 in its vision of empowering women of India. As the Indian government mandates that 50% of all village heads or Sarpanches be women, and 80% of all farmers in India are women, the focus of ‘Red Rickshaw Revolution2’ (RRR2)  is  Women leaders/Farmers and Agriculture. The campaign celebrates achievements of 20 inspirational women leaders/farmers from various parts of the country.

As part of the ‘Red Rickshaw Revolution’ (RRR) 2  campaign, the Vodafone Foundation is also setting up physical infrastructure called ‘Digital Resource Centres’ in each village visited during the journey and empowering women leaders / farmers by making them digitally literate.

The Digital Resource Centre will be one stop centre for women to learn using a computer, work together on social issues like child marriage and gender equality. It will also enable them to access information about various beneficial government schemes, to connect with other regional developmental programmes through the internet. The centre will provide Digital Literacy Support to disseminate governance and agricultural information.   It is enabled with internet connectivity, a printer, and 5 android tablets.