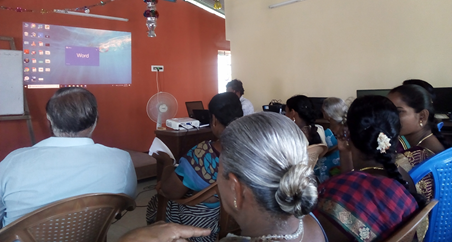 Helpage India and DEF are jointly initiating a digital ecosystem for elderly citizens. The project called Astitva, launched in districts Nagapattinam and Virudhu Nagar, aims to install a hub centre and one spoke centre in each district. The hub centres are to provide necessary digital infrastructure along with furniture items.  Following the establishment of the Nagapattinam hub centre, Training of Trainers (ToT) was undertaken. The trainers were specifically identified, who were part of the ASTITVA group in the region, so as to further conduct training of elders. The trainings were delivered on the lines of the curriculum developed by DEF for CIRC program.

Currently a batch formed of these members and elders has been formed and ToT has been conducted by a professional skill development trainer. The ToT was conducted both in English and Tamil medium and broadly concentrated on basic computer literacy, Internet, social media and other digital services. Subsequent training sessions were also delivered to train the trainers further in detailed digital training. The training sessions comprised of theoretical, practical and hands on modules such as basic hardware training. The hub centres are open to trainers now for practicing their training.

For each location, one entrepreneur was identified who was responsible for running the centre as an enterprise. Similarly, all the running expenses were to be met locally. Ms. Raji, the entrepreneur in Nagapattinam, has been identified as the direct person of contact between the hub centre, spoke centre and DEF. Post the ToT, each trainer was encouraged to form a group with elders and multiply the process to engage more elders with the digital world and services.