Baseless Aadhaar and its many flaws: When the poor lose their thumb prints

You are here:
May 9, 2017Leave a commentBlogsBy 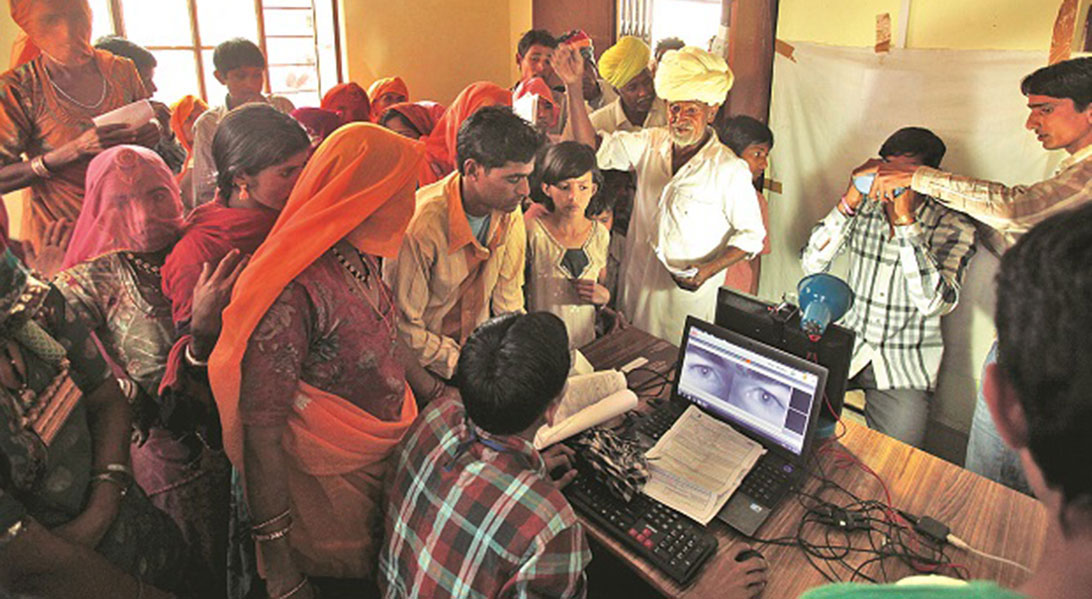 This article was first published in the Business Standard on May 9, 2017.

Wardi Devi, a senior citizen, hails from a remote town of Rajasthan. She’s tried to enrol for the Aadhaar thrice and even paid Rs. 150 and Rs. 50 to agents while making the first two attempts. Tired of coughing out her hard earned money from her meagre wages, she refused to pay anything the third time. Despite having visited the Aadhaar centre on multiple occasions, she is yet to receive her UIDAI (Unique Identification Authority of India). Since she is not an Aadhaar Card holder, she is not entitled to subsidised food grains under the public distribution system (PDS). In the absence of an Aadhaar Card, she is also deprived of various other government entitlements, including the right to work under the Mahatma Gandhi National Rural Employment Guarantee Act (MGNREGA).

Ninety-year-old Fefi Devi and her husband Nathu Singh haven’t received ration from the local Fair Price Shop (FPS) ever since Aadhaar-based biometric authentication was introduced in their village, Kukerkheda in Rajsamand district of Rajasthan, in 2014. The Point-of-Sale (PoS) machine doesn’t recognise their thumb impressions since the lines on their thumbs have disappeared due to rigorous manual labour — their source of daily wages.

UIDAI — more commonly known as Aadhaar — which was introduced in 2009 is “essentially a paperless online anytime-anywhere identity assigned to a resident to cover his/her entire lifetime”. The project “assures” inclusion of the entire Indian population into various government entitlements and programmes from which citizen were often “wrongly excluded”. The project aims at making the downtrodden and underserved independent by removing the middlemen, thereby reducing corruption and challenges related to implementation. However, as is evident from the cases above, a number of people are losing out on their basic rights such as food and work.

Citizens are still in search of their identity

The Constitution guarantees both Fefi Devi and Wardi Devi the Right to Life and, hence, right to be included in government welfare schemes. However, a mandate like Aadhaar, for accessing these schemes, does not. If we dig a little deeper, we realise that the project’s initial claims were based on a basic misunderstanding of the causes for exclusion. Worse, the experience of the past eight years of the project suggests that nothing has changed, except the project itself has become a source of exclusion from government programmes for thousands.

Rajasthan, the second state to implement use of Aadhaar authentication at all ration shops or FPSs after Andhra Pradesh, is one such example. The state principal secretary of food and civil supplies department claimed last year that 63 per cent of beneficiaries were able to collect their grains after Aadhaar authentication, as per data from August 2016. This means that 37 per cent of the population were turned down ration because their thumb impressions weren’t recognised due to several possible reasons. In some cases, citizens were denied their right to subsided ration because they did not have the ‘mandatory’ Aadhaar Card. In some other cases, the individuals had an Aadhaar Card but the PoS machine was out of order. In yet other cases, the citizen had an Aadhaar Card and the PoS machine was functional but there was no Internet connectivity in the village. There were also cases where everything was in place — Aadhaar, PoS and Internet — but the machine refused to recognise the biometrics of a rugged thumb.

It has been repeatedly pointed out to the government agencies — supported by evidences from Rajasthan, Jharkhand and Delhi — that the most vulnerable groups, such as elderly and migrant workers who do manual labour, face difficulty in accessing benefits due to failed biometric authentication. Yet, there is no system in place to handle such cases.

The FAQ section on the UIDAI website asks, “How will the biometric of the differently-abled and people with no finger prints or rugged hands e.g. beedi workers or people with no fingers be captured?” The answer to that question is listed as follows: “The policy will take into consideration these exceptions and the biometric standards prescribed will ensure that these groups are not excluded. In the case of people without hands/ fingers only photo will be used for identity determination and there will be markers to determine uniqueness.” However, as we know, no such mechanism has been put in place yet.

Clearly, not much has changed in the last eight years since UIDAI was introduced. Citizens are still in search of their identity. Jyothi Alamadamu (Gollaprolu Mandal), a tribal resident of the Sweeper Colony in Andhra Pradesh, works as a maid. In her blog, Reetika Khera had shared the story of this women whose three-year old twins were starving because the e-POS did not recognise her biometric or identify her ration card number. In her blog, Khera quotes an angry villager: “There is no point of giving Rs. 1 per kg rice and Rs. 2 per kg wheat if the poor has to forego Rs. 250 of their wage, excluding the cost of transportation, in the bargain.”

In another case story from Chendurthi village (Gollaprolu Mandal), Andhra Pradesh, villagers shared they had to travel at least 5-10 kilometres to reach the nearest Fair Price Shop and then stand in the queue for hours. As the day progresses, the queue becomes longer because it often takes more than one attempt for the POS machine to authenticate the biometric details.

There are numerous articles written on challenges that UIDAI faces. These are cultural, social and infrastructural challenges. We do not have roads, electricity or connectivity in place to execute such a mandate.

Today, Aadhaar has become an integral (read coerced) part of our lives. Initially introduced as a voluntary mechanism, it was clarified by the central government on May 2, 2017, that “Sections 7 and 54 of the Aadhaar Act made it mandatory for people to get enrolled [in the Aadhar scheme]”. And that citizens cannot claim “absolute right over their body parts and refuse to give digital samples of their fingerprints and iris for Aadhaar enrolment”.

Further, there is the challenge of data protection. Through UIDAI, the Indian government has tried to replicate the European e-citizenship model which assigns every citizen a unique identity number. For example, Estonia has nearly a population of nearly 1.3 million inhabitants — this is half of South Delhi’s population. Every ID-card owner gets an official e-mail address, which is intended for official communication with the State and is defined as an “official electronic residence” of the citizen. More than 300,000 private individuals and over 56,000 companies are using this opportunity today in that country (April 2017). The country maintains an elaborate database, which can only be accessed if the concerned government department — or anybody else — states their purpose. Further, when this data is accessed, the citizen gets an official communication, informing him/her who has accessed the data and for what purpose.

On the hind side, UIDAI has major privacy issues and has no such mechanism to either protect the data or inform the citizens of the consumption of their data unlike Estonia. Indian citizens have no say or information about how their personal information is being used and by whom. According to the Aadhaar Act (Targeted Delivery of Financial and other Subsidies, benefits and services) of 2016, in fact, “In the interest of national security, a Joint Secretary in the central government may issue a direction for revealing to concerned authorities (i) Aadhaar number, (ii) biometric information (iris scan, finger print and other biological attributes specified by regulations), (iii) demographic information, and (iv) photograph. Also on the order of a court, (i) an individual’s Aadhaar number, (ii) photograph, and (iii) demographic information.” This is despite the Human Rights 34th Resolution that states storing metadata is a human rights violation.

Instead of fighting court cases and wasting energy and public money, India should rather invest in developing robust infrastructure, putting in place strong data protection and privacy laws and conducting pilot studies before rolling out mandatory Aadhaar-based delivery of rights and entitlements for citizens across the nation.

AadhaarDigital ExclusionFoodMGNREGAprivacy
Share this post
FacebookGoogle+Twitter
About the author
Related posts
In the age of social media, the credibility of content is an important issue
May 17, 2019
What will it take to bring India’s children online
November 15, 2018
Long road to Smartpur could be made much shorter
September 1, 2018
What’s the way forward?
July 20, 2018
India’s ‘let’s ban it’ approach to anything that makes it uncomfortable online is a violation of human rights
April 30, 2018
With the worst 4G speed in the world, is India just chasing headlines on digital economy?
February 23, 2018