Digital Empowerment Foundation through its network of ground staff has been able to understand the gravity of the situation arising due to covid-19 and has also been doing relief work and spreading awareness.. 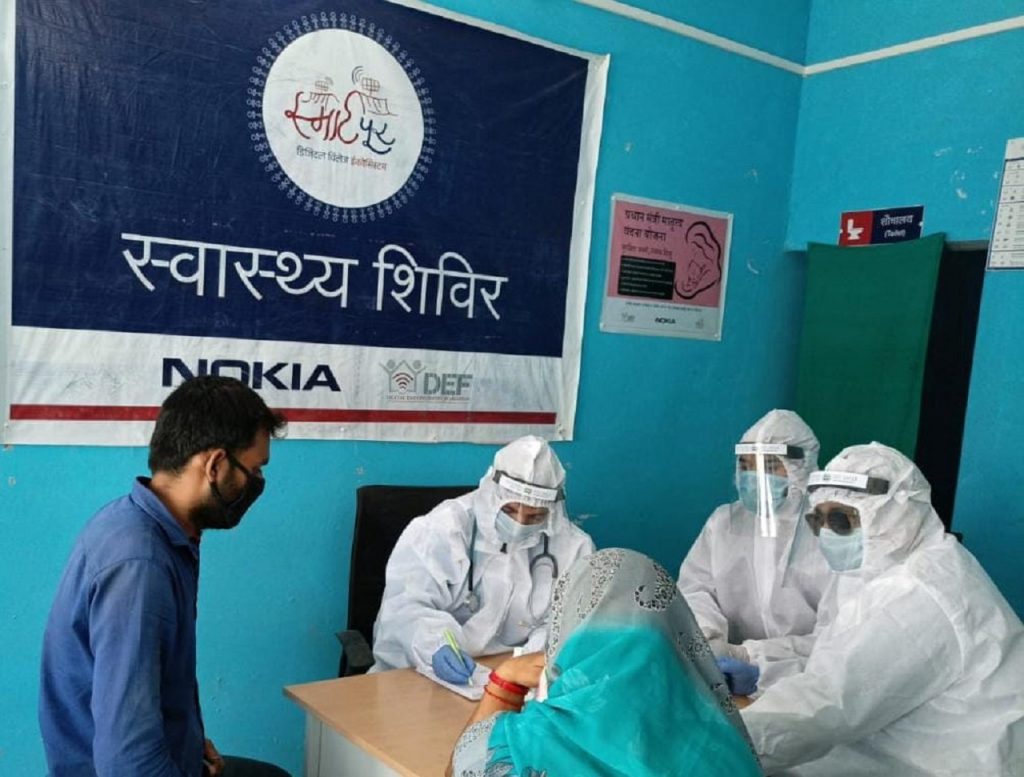 The second wave of Covid-19 has shattered the healthcare system, which was already wounded since the first wave brought by the Covid-19 pandemic. The situation on the ground is rapidly changing in terms of the rising number of cases, lockdown being imposed in an asymmetrical manner across all the states, the hoarding of essential equipment such as oxygen cylinders and Remdesivir along with the number of active cases and death rate. In such times, Digital Empowerment Foundation through its network of ground staff has been able to understand the situation arising due to covid-19 and has also been doing relief work by distributing masks, sanitizer and awareness campaigns on maintaining social distancing.

DEF through its large scale ground presence, has been able to understand the challenges that are specifically arising through the hinterlands of Alwar and Bharatpur in Rajasthan, Ghazipur and Barabanki in Uttar Pradesh, Nuh in Haryana, Vishakhapatnam and Chirala in Andhra Pradesh, Kanchipuram in Tamil Nadu, Chotupal in Telangana and Kollegal in Karnataka. The problems that have surfaced during this pandemic are at several levels such as at, health infrastructural level, governance level and lastly on livelihood level. 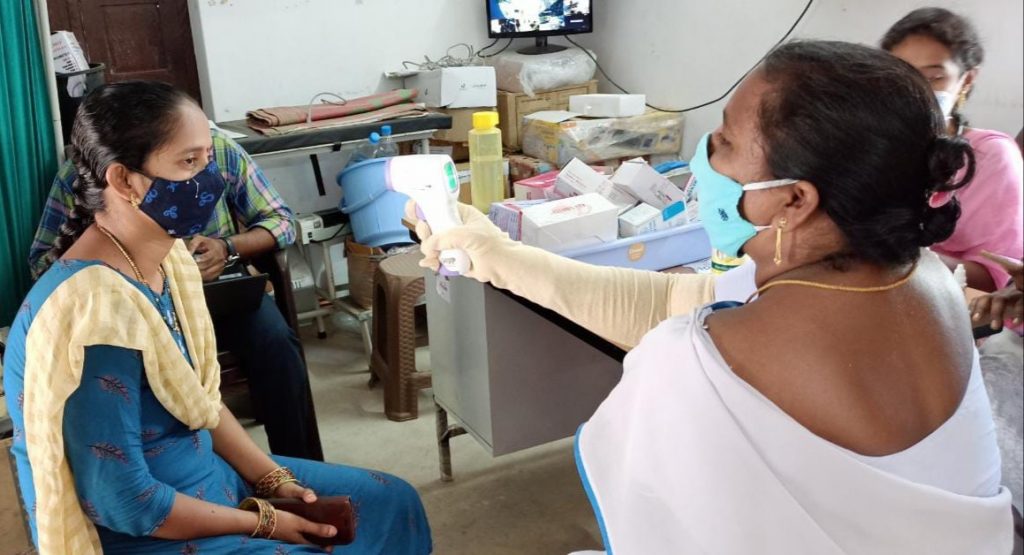 The pandemic has burdened the existing health infrastructure of the country, which already was inept and under resourced. The exponential rise in the cases of Covid-19 has brought to light the current situation of healthcare in the country. Not only are the hospitals understaffed, the lack of proper equipment and most of the time they are dysfunctional. This pandemic has exposed the ground reality of healthcare in the country. While the first wave of Covid-19 had broken the spine of healthcare system, the current wave has left the system paralysed.

Situation of the ground have shown that people are finding it difficult to visit a primary healthcare centre, the reason being they are far away from the villages and even if people manage to visit these centres they are met with resentment. Community Health Centres lack medical staff that can provide the required treatment, most of the available doctors are not adept in dealing with a pandemic situation, and the unavailability of required medicines and medical equipment create a dependency on district hospitals.

The cost of medicines, oxygen cylinders and other essential medical equipments as well as ambulances are sky rocketing. There is a shortage of medical staff as well as medicines because of their rising demand. Most of the locations such as Alwar, Ghazipur and Bharatpur have reported that as the hospitals are only entertaining Covid cases, other medical emergencies are being sidelined.

In locations such as Barabanki and Kanchipuram due to the unavailability of sufficient hospital beds, Covid-19 positive patients are forced to isolate themselves at home and get their treatment there. This is again problematic because the size of families is relatively large and they stay put in small houses where maintaining social distancing is next to impossible. This not only makes it difficult for the patient to undergo treatment but it puts other family members under immense risk.

Reports from Telangana suggest that in severe cases, patients are referred to other hospitals, but the hospitals are 80-100kms away and the medical expenditure along with the travelling cost are a significant barrier in availing emergency medical services. This highlights the precarity of healthcare system in India, which is failing at all the levels. The four-tier model of health infrastructure i.e., Sub Centre, Primary Health Centre, Community Health Centre and First Referral Units are facing unprecedented challenges that can be mitigated if the rural healthcare system is made more robust.

While the website for registering for vaccination – Cowin.gov.in has been put in place, people are still finding it difficult to get themselves registered. In rural areas and villages such as Alwar, people are not compatible in using the portal, reason being the portal is only available in English. Secondly even after registering, people are not getting vaccinated due to unavailability of vaccines in CHCs and district hospitals. Moreover, there is an underlying fear among people, which inhibits them from getting vaccinated and overall, there is lack of awareness about the urgent need of vaccination in communities. Overall, rural areas are facing multiple barriers to get themselves vaccinated – digital gateway, non-availability of vaccine, cost of vaccination, poor awareness about the benefits of vaccination and misinformed belief that vaccination is not beneficial. 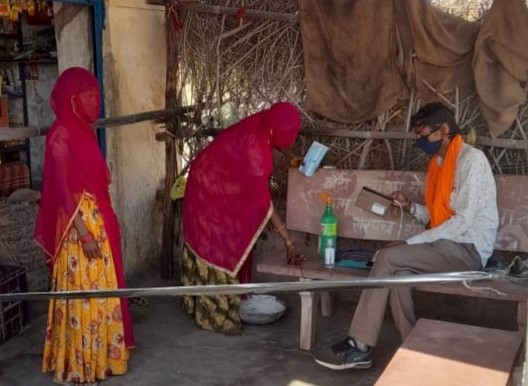 Report from Telangana suggest that very few Rapid Antigen Testing is being conducted. In Vizag, post the Covid-19 test being done, the reports are arriving in four-five days, the situation is far worse in rural areas which have few testing centres and the sample collection is also irregular. One of the reports from West Champaran in Bihar came saying that in the entire district there is no facility of RTPCR, and all the testing samples are sent to Patna, the capital of the state of Bihar.

The second wave of COVID-19 is pointing out the challenges of governance given the depth and size of population that possibly might be affected because of the pandemic. There is a surge of cases in rural areas as reported by several DEF centers and people on the ground. The existing health infrastructure has proved to be inadequate in front of this challenge and is finding it tough to fight the spread of the virus. A DEF center in Choutuppal Mandal reported that government has initiated door-to-door search of active cases. But there is no proper ration or food supply from the government making it tough for people who relied on it.

In Visakhapatnam several centers reported that there has been lack of response from the government. People in rural areas are finding it tough to access basic food and other services. The government is not running an awareness and precaution drive, which is a factor in rising cases. In a Kollegal center in Karnataka, it was reported that people are receiving basic service through PDS schemes. Government has decided to provide extra five kilos of rice May onwards in order to provide help.  But not much has been done to ramp up the awareness in rural areas. Kanchipuram center in Tamil Nadu reported that a strict lockdown is being followed in order to curb the rising cases. Still the number of cases in community is high.

Chirala Center situated in Andhra Pradesh reported that the government has not provided ration kit leaving poor in dire situation. There is a curfew in place put by the state government to curb the cases. Similarly, the Alwar Center reported that the government has not initiated food relief, which makes the situation extremely tough for poor. The pensions are not reaching people. There is shortage of ration in the community. In Bharatpur center, people are not going to hospital even after having symptoms reflecting lack of awareness and fear. Nuh Center reported the same problem that even after cases of death in community, people are not using precaution. There is lack of awareness. Local government has tried to run awareness campaign but it has not reached enough people.

Barabanki Center in Uttar Pradesh reported the food stocks are finished for people. There is a lack of help from the government. The government response is not proactive like last year even though the spread is far deeper this time. Similarly, in a village in Ghazipur, there are over 100 families without any food left. There is lack of awareness and increased fear in the community leading to hesitation in vaccination.

The common feedback from the ground is that the response from the government has not been same as last year. The focus from basic schemes also has shifted. Most families are struggling to get basic food and ration. The lack of awareness in rural communities is a big challenge that is not being addressed as aggressively as it should be.

While the focus has shifted on providing medical relief, which is also the need of the hour, but parallelly people are facing challenge in accessing social security services. Due to lockdown and rising cases even the Common Service Centres are closed, making it difficult for people to avail government benefits. Even if the applications for availing the service is filled, it remains in pipeline because the government staffs are heavily burdened in providing healthcare services. In Alwar,one of the centres is seeing less and less of e-governance beneficiaries indicating that Covid-19 has punctured the social safety net and showcases people’s struggling for basic services. 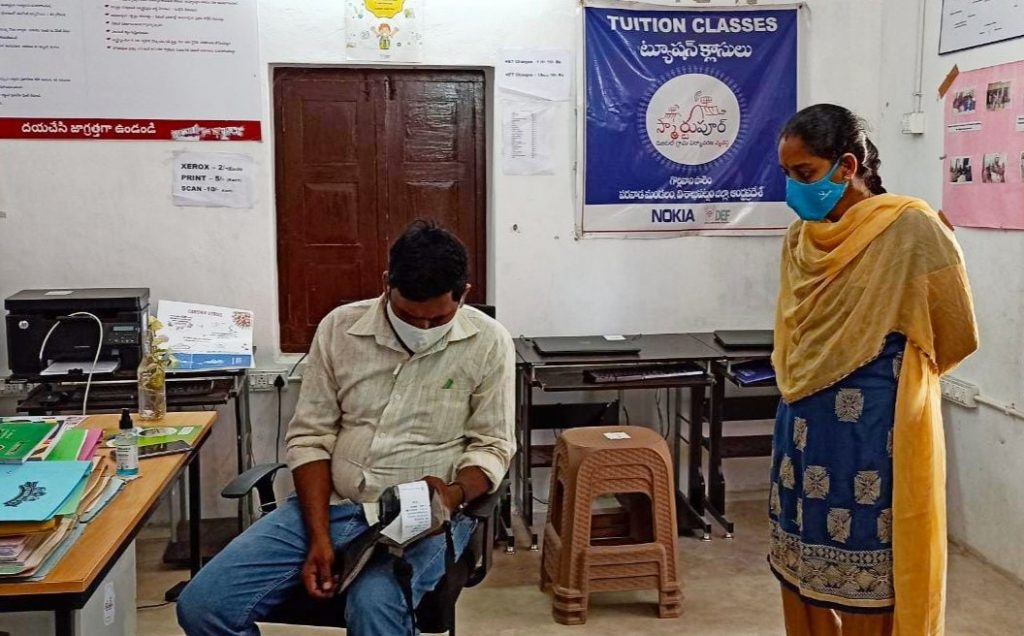 The second wave has engulfed the entire country, as a result the states have been imposing lockdown depending on the situation and the positivity rate. Unlike previous year when a nation-wide lockdown was imposed, the country saw thousands of people returning back to their villages mostly on foot or by paying huge sums of money to heavy vehicle drivers. This year while there is no nation-wide lockdown, still many states are witnessing a return of migrants who used to work in cities as daily wage labourers. Report from Alwar suggest that people have returned to the village and do not have sufficient rations available with them. Most of them worked in Mumbai and came back once the cases started rising there. Due to state lockdown, the economic activities within the city have halted, which further makes them economically vulnerable. With no income to support the families and no substantial help from the administration, people on the ground are facing a shortage of food rations with an ever-increasing unemployment rate.

Locations such as Bharatpur and Alwar where most of the people work as drivers, have lost their jobs because the state of Rajasthan has imposed strict lockdown and curbed mobility of vehicles, which has severely impacted the drivers of Haryana and Rajasthan. Reports from Ghazipur show that many small businesses have ended in this pandemic, further creating vulnerability among socio-economically marginalised communities. In coastal towns such as of Vishakhapatnam, fishermen/women have been badly affected, with markets being shut indefinitely and lack of storage facility, the fishing community is losing on their daily wage.