You are here:
August 10, 2017Leave a commentOsama's Columns in MintBy Udita Chaturvedi 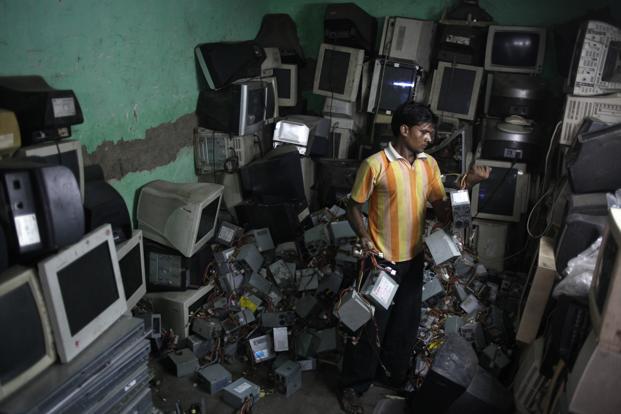 This article was first published in the Mint on August 10, 2017.

Enter the narrow and congested lanes of Seelampur in North-East Delhi, and you are greeted by the a strong, pungent smell of burnt aluminium and metal. It’s almost unbearable for “outsiders” to breathe in this area but there’s no sign of discomfort on the faces of the people on the streets, those who lean against the wall on the pavement or sit amid a pile of metal scrap. The “insiders” have become immune to the odour and care little about the health hazards that hang over their heads. These insiders work amid the same dump of metal scrap that reeks of chemicals.

Seelampur is an electronic waste dumping site; it alone deals with more than 30,000 tonnes of e-waste every day. Most of what can be found in Seelampur comes from large companies in Noida or government departments, according to locals. Seelampur is a semi-urban pocket established in 1993 to relocate displaced families from north and central Delhi after the emergency in the 1970s. Today, for almost every household here, e-waste is their only source of income.

As much as 90% of e-waste in the country is dismantled and recycled in unorganized hubs like Seelampur in Delhi and Andheri in Mumbai, where the efficiency of extracting metals is extremely poor due to lack of equipment and unskilled staff, according to a research by the Centre for Science and Environment.

At the same time, lack of safety gear and proper guidelines to manage e-waste significantly raises the risk of health hazards.

Yet, thousands of men, women and children are employed and engaged in unorganized e-waste dumping and recycling sites where they hunt for lead, copper, aluminium and brass amid piles of old smartphones, desktops, laptops, tablets, motherboards, circuit boards, air-conditioners, fridges and motors.

According to a study released by the Electronics Industry Association of India at the Componex Nepcon 2009 estimated the total e-waste generated in 2009 in India at 434,000 tonnes. With increasing per capita income and purchasing power, India’s electronics market has become the largest in the world, projected to reach $400 billion by 2020. It is also likely to generate 5.2 million tonnes (mt) e-waste per annum by 2020 from the current 1.8mt, growing at a compounded annual growth rate of about 30%, according to a study on Electronic Waste Management in India conducted by ASSOCHAM-cKinetics in 2016.

We ask one of the mothers sitting on the pavement if she is not worried her child may step on a piece of metal or inhale the dangerous fumes. She says in a matter of fact way, “Khelenge nahi toh seekhenge kaise (if they won’t play, how will they learn)?” We almost feel silly asking that question. It makes us feel ignorant. What other option do they have?

While were walking through the locality, a man from the community told Digital Empowerment Foundation that raids by the Municipal Corporation of Delhi (MCD) are an annual phenomenon, as these e-waste segregation colonies are unauthorised.

Every time a tip-off is received about a raid, people scramble to pull down shutters. When the MCD raids Seelampur, some shops/houses are sealed, while others keep their work under cover for a few days, and everything is back on track within a week.

We were introduced to some of the local people who deal with metal scrap, but soon realised that it was not a good idea to indicate the identity of our organization. The locals are sceptical about non-government organizations and believe they are out to end their livelihood.

India’s technological revolution and hunger for cheap phones have made it the fifth largest e-waste generator in the world.

In the capitalist world, many devices become outdated in around three years and reach their zero value, forcing firms to discard their old systems and buy new ones. We individuals too are constantly persuaded to upgrade to newer models.

The result: the amount of e-waste generated per year is increasing at an alarming rate, with no proper measures or mechanisms to deal with it in a structured and organized manner.

Amazingly, for a country producing nearly 1.8mt of e-waste, there are only about 178 dismantlers/recyclers authorised by the government—and not all of them are equipped with end-to-end capabilities to recycle e-waste in an environment-friendly manner. E-waste poses a massive threat to life of those who deal with it and those who live in areas that deal with it.

The Assocham study states that 76% of those who deal with e-waste are prone to cancer and suffer from weak immunity systems. Breathing-related health problems are common in these areas. These are just health-related problems for humans, but there are dire consequences for the environment, too.

There is, therefore, a need for electronics consumers to become conscious users of their gadgets, and for the government to take a more proactive role in ensuring that e-waste is dismantled and recycled under proper international guidelines, and those dealing with e-waste are supplied with adequate safety gear. India cannot call its Digital India programme a success unless it addresses these concerns.