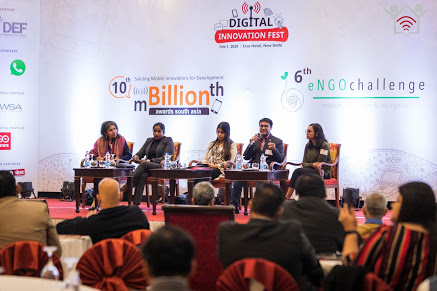 Digital Empowerment Foundation (DEF) from 2002, has been working to bring unreached and underserved communities of India out of digital darkness.

The event also saw the launch of two DEF publications — ­­Mobile First and Smart Solutions for Smart Communities, explaining the initiative by various digital innovators who  leveraged the power of digital media to positively impact our society.

It was a joyous occasion celebrating digital innovations, moments and ideas took our breath away in the past year. Digital entrepreneurs and organisations were honoured for positively impacting our lives and driving us towards an exciting future in the Digital Age. Click here for a glance of the memorable day.

Mobile phones have emerged as the most powerful digital tool for empowerment across the world, especially in developing countries. The mBillionth Awards, in its 10th year, recognised and honoured mobile based innovations that are bridging digital divide and greater socio-economic equality, while creating an ecosystem of innovators and developers to learn from each other, collaborate and scale up.  It was co-organised with Facebook.

There are millions of not-for-profits and civil society organisations playing a vital role in the socio-economic development of underserved and marginalised communities. However, many NGOs struggle to sustain themselves due to various reasons—until they embraced the Digital Era. The eNGO Challenge Awards, in its 6th year, celebrated organisations that have undertaken exceptional initiatives with communities using digital tools and intervention. It was co-organised with WhatsApp.

The 10thmBillioth Awards received 216 entries, out of which 21 initiatives emerged as Winners, Special Mention and Chairperson’s Distinction under seven categories—Government Engagement & Smart Settlements; Early Stage projects; Health and Well Being; Culture and Tourism; Learning and Education; Agriculture and Environment and Inclusion and Empowerment.

6th eNGO Challenge Awards received 439 entries and total 25 initiatives were chosen as Winners, Special Mention and Chairperson’s Distinction. The award recognised and honoured the organisations under seven categories—Governance and Livelihood; Education and Learning; Heritage and Culture; Entrepreneurship and Outreach; Health and Wellness; Enablement and Empowerment; Environment and Sustainability.

In both the awards—the entries went through a long selection process over many months to be acknowledged as nominations. Thereafter, the best nominations were carefully selected by the Grand Jury —comprising of eminent individuals from diverse fields. The eNGO Challenge Grand Jury took place on 16th November at Sanskriti Kala Kendra, New Delhi. Meanwhile, the  10th mBillionth Grand Jury was held on November 21, 2019 at the New Delhi Facebook Office.

The winners were chosen after debate, deliberation and impartial voting process—on the basis of innovativeness, ease of use, sustainability, adoptability and adaptability of the initiative.

The Digital Innovation Fest was packed with, Keynotes, Panel Discussion, Presentations by Innovators and Entrepreneurs, Cultural Programme, networking opportunities and the Award Gala.

Arun Maira, former member of the Planning Commission, in his keynote emphasised—“Written rules are not enough. We live in a social atmosphere within which social media is used to develop written and unwritten rules”. He further suggested that there should be several movements towards training people on how to use social media tools, it’s importance, and when one has gotten well versed with it, one should move towards attending to responsibly use it.

The panel discussion on—‘Media in Every Hand: We Need Critical Thinking’—explored the importance of critical thinking where fake news and misinformation has compromised people’s thought process and actions thereof, in the age of information binging through social media.

The panel was moderated by Seema Chishti, a senior journalist with Indian Express—and participated by Rema Rajeshwari, IPS from Telangana, who is ingeniously engaging the community in the fight against fake news; Shivam Shankar Singh, author of ‘How to Win an Election in India’, who was also leading BJP’s social media campaign in North-East; Asma Zaidi from ‘Youth Ki Awaz’, user-generated Indian youth media platform on social justice issues; and Kritika Goel, who is leading fact-finding mission in WebQoof—fact-finding division of The Quint.

Harish Hande, recipient of 2011 Ramon Magsaysay Award for his pragmatic efforts to put solar power technology in the hands of the poor—in his keynote stated—“You are playing a test match and not a 20-20. Be concentrated more on the long-term impact of digitisation and not on short-term goals. Whatever you develop, you are not developing it for a certain region of a country, but you are actually leading a similar thought process across the world.”

The day witnessed a productive synergy between the participants, something that is vital for growth, prosperity and sustenance of the communities and societies in the Digital Age.