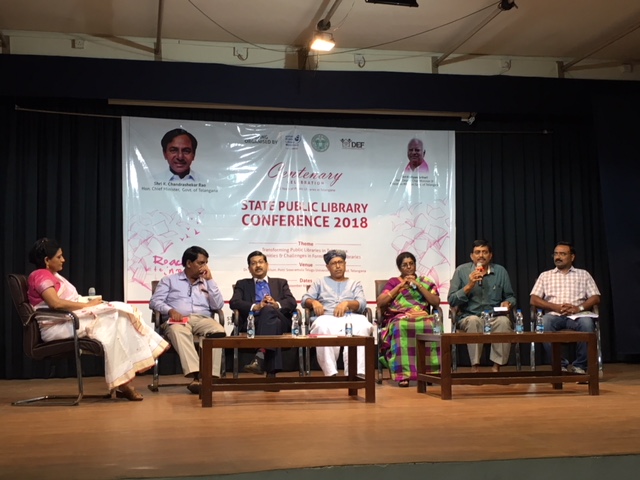 Encouraged by the outcome of the first SPLC 2018, the second edition of State Public Library Conference was organized on September 06-07, 2018 and focused on taking the discussion and deliberation forward in order to build an ecosystem in Telangana, where public libraries, seen as prime knowledge centres could develop and thrive with the help of technology and community support. A library by dictionary definition is a ‘collection of sources of information and similar resources, made accessible to a defined community for reference or borrowing. India is a land of oral tradition.

The folk tales and songs have always been passed on from one generation to the other in oral form. So the question arises, a folk musician who remembers 400 songs, and provides access to them to the community through performances; shouldn’t they also be classified as a form of library? Any repository of information and knowledge should be considered a library. Libraries could be a museum, cultural space, community space, learning centre and so on.

We are living in a digital age, where access to information and knowledge is more dynamic and fluid than before. A library in its conservative form has outlived its utility. Most of the libraries are stagnant. They are wasted spaces, which hold little relevance for the current users, because they lack imagination to re-invent themselves to draw users for meaningful engagement. Many states still don’t even have library legislation. Tamil Nadu and Karnataka are the only two mature states in terms of library legislation, having passed it in 1948 and 1965, respectively. Otherwise, library legislation in Uttar Pradesh, Rajasthan, Lakshadweep, Bihar, Chhattisgarh and Arunachal Pradesh is hardly older than 15 years.

Community is the key to revival of the libraries. Meaningful community participation will automatically pressurize the government to reverse their apathetic outlook towards libraries. For this to happen, some initiative also needs to come from the libraries. The librarians need to emerge as knowledge leaders within local communities who are respected and look up to. One third of CSR goes into unskilled activities. We have failed to make a case for libraries. Most of the public libraries are in semi-urban and rural areas. They can very easily orient themselves through programs and activities to increase their eligibility for CSR funds under education. ‘Technology Empowering Girls (TeG)’ programme in partnership with American Express and New Delhi Municipal Council (NDMC), which has been very effective in Delhi to train girls and women in technology using library space, will contribute to making a case for libraries to raise funds from CSR for development. TeG programme will roll out very soon in Telangana also.

Building a culture of learning requires multiple approaches and partnerships. A library should be a space for preservation of culture and heritage, community participation, education and awareness, games etc. Library being a silent zone is not a sustainable idea anymore. Can libraries become a combination of café, mall, and learning centres? Can we increase reasons to visit library as educational and recreational places.

We’ve have number of exciting programmes in the libraries such as celebration of Reading Mission 2022, in partnership with Ministry of Human Resource and Development ,which is promoting reading as an intrinsic part of our culture; Atal Tinkering Lab (ATL), in partnership with Niti Aayog and Intel, which is promoting a culture of innovation amongst students; and many activities in partnership with National Digital Library of India (NDLI), National Book Trust (NBT), local government schools and so on. However, this is still just a drop in the ocean. It’s a long road ahead, and consistent way forward is paramount to achieving the larger vision. Fundamental to poverty is not money, but knowledge. Libraries bring stories of change, and we have to use these stories to nurture culture of learning.