You are here:
December 8, 2017Leave a commentOsama's Columns in MintBy Udita Chaturvedi 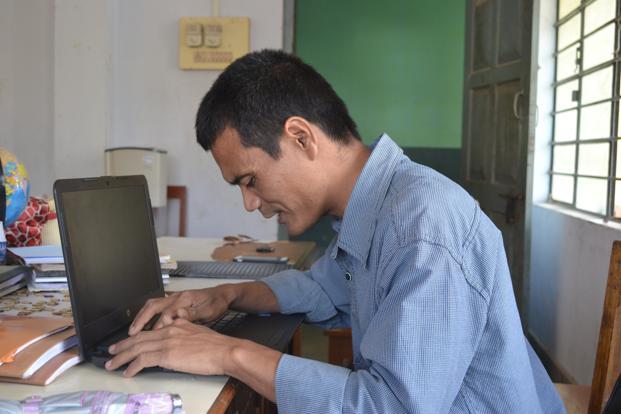 This article was first published in the Mint on December 8, 2017.

A. Sengjan is a 40-year-old teacher at the Montfort Centre for Education, Tura, Meghalaya. In the past year, Sengjan has learnt to use computers and has even begun to teach the skill to his students along with his usual subjects.

“Everywhere you go today, in the private or the public sector, work is dependent on computers. People are posting jobs online and people are applying for jobs online. Computers have become an extremely important part of our daily lives today, and that is the reason I encourage my students to learn computers,” he tells us.

Sengjan teaches nursery, kindergarten and Class I children communication skills and tells them about the animals of India. But not all animals and birds can be found in the Garo hills. To fill the gaps in their knowledge, “I download animal sounds on my laptop and play it for the children to hear. That’s how they learn to recognize these animals,” he says.

For students of Classes II-XI, he takes computer classes to teach them how to navigate between folders, type on Word and run a spellcheck.

Sengjan is blind by birth. So are his students. Montfort Centre for Education is a school for visually and sensorially challenged persons.

Last year, under a programme of the National Institute for the Visually Handicapped, Sengjan was given a laptop. He had never used one before, so he had to take the help of some friends who had. He soon realized that he needed more focused training. Luckily for him, and several others who have often been excluded from the digital umbrella, Digital Empowerment Foundation’s Community Information Resource Centre (CIRC) offered a three-month basic digital literacy course. Segnjan was keen to learn and enrolled.

A team of two from CIRC would spend a few hours every week at the special education school, and teach Segjan and others how to use a laptop. Though these two had trained hundreds of students in digital literacy, teaching the visually impaired was a challenge. For those who have the luxury of sight, operating the mouse/trackpad is a natural extension of using a computer/laptop. However, for those who can’t see, a mouse or trackpad has little value. Not using the mouse while trying to teach visually impaired students did not come naturally to the trainers but they worked hard. They watched videos on YouTube and used the pedagogy to train students of Montfort Centre for Education. They might have not have been the perfect trainers but Sengjan has learnt enough to operate a computer on his own now.

Etherson Momin is a 19-year-old who is deaf and mute but that hasn’t stopped him from communicating with his friends. With functional mobile literacy, coupled with an affordable data plan, Momin makes video calls to his friends and talks to them in sign language. He is also a member of various Facebook self-help-groups for the deaf and mute. On these platforms, they share video-driven posts in which people talk in sign language. Some recite poetry, some give fashion tips, others talk about the news of the day, and many just share self-help tips and seek community support and interaction.

Working with these people in Tura, we’ve come to realize how difficult it is for this group of people to survive in today’s Digital India. Firstly, there are hardly any schools or institutes that train deaf, mute or blind persons in digital literacy. Secondly, the government, too, has no policy or project to include these persons, who are being further excluded from their rights, as more and more government and citizen services go online. Almost no government website has been designed keeping in mind the specially abled, and the assistance they require.

Virtual assistants such as Siri and Cortana have been extremely useful for the blind. So has Google TalkBack. An app for blind, low-vision and dyslexic persons, KNFB Reader converts printed text to speech or Braille. LookTel Money Reader makes financial transactions easier for the visually impaired; when the app’s camera is pointed at any one of the 21 currencies (including the Indian rupee) that it recognizes, it immediately speaks out the denomination.

Sri Lanka’s Sign Language Interpreter is an application that allows communication between people who don’t know sign language and those who understand sign language—the app converts text/audio into sign language that is delivered by a 3D animated model. However, the adoption rate in India for these apps is low, primarily because mass efforts have not been made to train specially-abled individuals in functional mobile literacy.

In 2016, Union minister for information technology Ravi Shankar Prasad promised to make 100 government websites disabled-friendly after a 2014 report had pointed out that an estimated 70 million disabled people in India have no access to information on top government websites due to physical, sensory, cognitive and other disabilities. The promise is yet to be kept.

According to the National Programme for Control of Blindness, 12 million of the world’s 39 million blind persons reside in India, making our country home to one-third of the world’s blind population. In such a scenario, concrete and long-term efforts are required to include specially abled persons under the National Digital Literacy Mission, and not exclude them from what is a necessity of life today.