India is unique in culture, geographic pattern, community settlements, economic or natural resources. There is wide regional disparity in development within the country. As a result, people living in rural parts belonging to lower income group, move from their state of origin to another state, within the boundaries of India, either for social or economic reasons. In common term they are referred to as ‘Migrant labourers’. Migrant labourers are a formidable force in India’s economic life, especially the informal sector and MSMEs, constituting nearly 50% of India’s GDP. The total number of internal migrants in India, as per the 2011 census, is 45.36 crore or 37% of the country’s population. According to Aajeevika Bureau—among the biggest employers of migrant labourers are— construction sector (40 million), domestic work (20 million), textile (11 million), brick kiln work (10 million), transportation, mines & quarries and agriculture. Managed in many cases by private labour contractors and fuelled by social networks, there are well formed patterns in movement of labour across hundreds of kilometers within the country. The major push factors for migration in villages are low daily wages, lack of job opportunities, water scarcity etc. While the pull factors in cities are high wages, immense job opportunities, access to basic amenities & water, and better quality of life.

on low wage earning migrant population across the country. Just to put things in perspective, this is being seen as the second largest forced long distance movement of people recorded in the history of India, since the partition in 1947. According to an assessment by the Centre for Monitoring Indian Economy, more than 120 million people lost their jobs in April due to the lockdown, 75 percent of whom were working in the unorganised sector. So with the looming fear of hunger they were forced to begin arduous journeys back to their villages —cycling or hitching rides on lorries or on foot. Some travelled for a few hundred kilometers, while others covered more than a thousand to reach home. The unofficial sources, put India’s reverse migration since mid-March, 2020, conservatively at 30 million or 3 crore or 15-20% of the urban workforce. And considering the fact that most of them are sole breadwinners in a family of 4-5 members on an average, we are looking at a much larger population that is affected by this situation. We are sitting on a proverbial time bomb if the situation is not addressed through a systemic constructive process. However, any step towards resolution should start by adequately understanding the situation and giving due respect to the complexities involved.

DEF has started an initiative under its ongoing ‘Covid-19 Digital Emergency Relief Programme (C-DERP)’ that focusses on the essential needs of the migrant labourers who have been rendered jobless, homeless and penniless—and are continuing to face social and economic hardships in their home states.

10000+ Digital Foot Soldiers attached with Digital Empowerment Foundation, are working relentlessly across worst affected villages due to the lockdown to provide immediate relief to the migrant labourers who are up against excruciating circumstances. They are doing so by building a robust network between Administration, Commodity Centres and Supply Chain. Over 150,000 migrant labourers have already benefitted from the relief measures.

DEF is live tracking 150,000 distressed migrant labourers through dedicated toll free numbers, and coordinating on their behalf with the local administration and civil groups to ensure their well-being.

A. Ethnographic Study- DEF is conducting an ‘Ethnographic Study’ on migrant labourers in the current scenario to assess the impact of unprecedented crisis on them from diverse perspectives and a way forward. Ethnography is a form of qualitative research in which the researcher enters into the environment of the study participants as unobtrusively as possible, with the goal of strictly being an observer. The aim is to capture key moments of the participant’s experience in as true a form as possible. Rather than relying on the memory or the descriptions of a study participant, ethnography is all about observing and recording important moments as they happen. The study is being undertaken in three underdeveloped and most affected states of India—Uttar Pradesh, Bihar and Jharkhand. It includes visiting 4-5 villages in each state, which have witnessed substantial number of migrant labourers forced to return due to the crisis. The idea is to spend quality time with 3-4 migrant labourers in every village individually in their natural habitat and video interview them to record their diverse experiences—while observing them and gathering vital insights.

B. Shramik Sampark Setu- An online survey is being undertaken in Ghazipur and Barabanki in Uttar Pradesh; West Champaran in Bihar; Ranchi and Ramgarh in Jharkhand; and Alwar and Barmer in Rajasthan. These are some of the states, which have been critically affected by the reverse migration process. 1000 impacted migrant labourers are being targeted with an online survey across four aforementioned states to understand and address various lacunae at the ground level under DEF’s eight programmatic themes, which drives organisation’s key initiatives on the ground—Access & Infrastructure; Education and Empowerment; Governance and Citizen Services; Market & Social Enterprises; Knowledge Hub & Network; and Research & Advocacy. 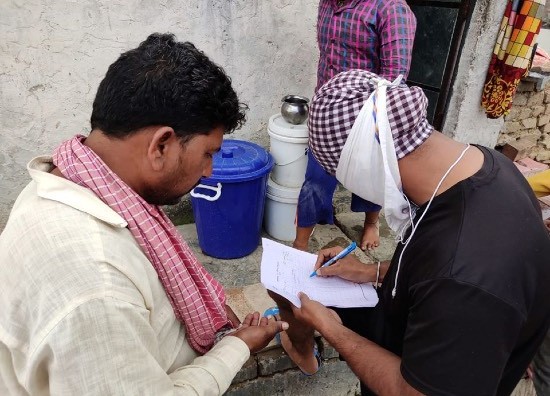 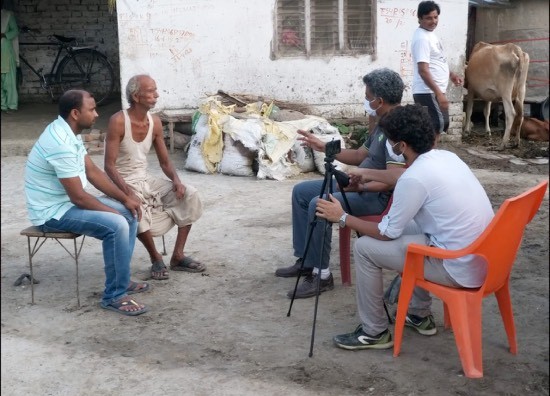 The present crisis has lent a monumental push to the digital movement, especially in the rural parts of India. The gaps in digital infrastructural development in the villages were in stark visibility, which resulted in the affected marginalised communities deprived of essential digital services, such as—e-health, e-learning, e-banking, e-governance etc. Hence, the need to reskill, upskill and train existing rural workforce in emerging technologies has never been greater—who will initiate and sustain the digital ecosystem at the rural level, which will greatly contribute to the enhancement of livelihood options for them closer home. 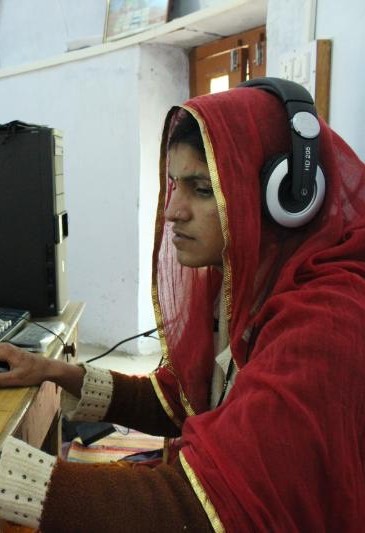 Pradesh, Bihar, Jharkhand, Odisha and Madhya Pradesh. 100 promising young migrant workers are being identified in each state through a pre-assessment process with an aptitude for acquiring digital skills. They will be trained to develop digital infrastructure and provide essential digital services, and will be linked with livelihood options thereof. Specially designed curriculums are developed to effectively initiate the programme for various digital needs at the rural level, such as—setting up wireless infrastructure for the rural communities; facilitating e-learning in village schools; providing e-banking services at the door steps; and building e-health infrastructure in remote locations.

A. Covid-19: The New Normal (Anthology)- Digital Empowerment Foundation (DEF) has published an anthology of articles covering thoughts, ideas, perspectives and insights by changemakers and thought leaders in their domain on nuanced digital response to the current Covid-19 crisis. The broad themes that are covered encapsulates a wide range of impact and experiences witnessed across various aspects of human existence, intervention and engagement, such as—Access, Livelihood, Migration, Governance, Digital Rights et al.

B. DEF Dialogue- Covid-19 DEF Dialogue is a special series initiated by Digital Empowerment Foundation, where the Founder & Director of DEF, Osama Manzar, interacts with key individuals from various walks of life who are doing exemplary work to provide relief and support to the affected people in the crisis. The interaction assists in revealing how COVID-19 and the lockdown situation has impacted various underserved areas, along with critical measures being undertaken to tackle it.

C. Long form and Short Films- DEF is creating number of impactful short films that are visually representing the hardships endured by the migrant labourers, while undertaking challenging journeys back to their villages hundreds and thousands of kilometers away. We are also producing a long form documentary film under ‘Ethnographic Project’ that will critically focus on the impact of lockdown on migrant labourers in three critically affected states—Uttar Pradesh, Bihar and Jharkhand. 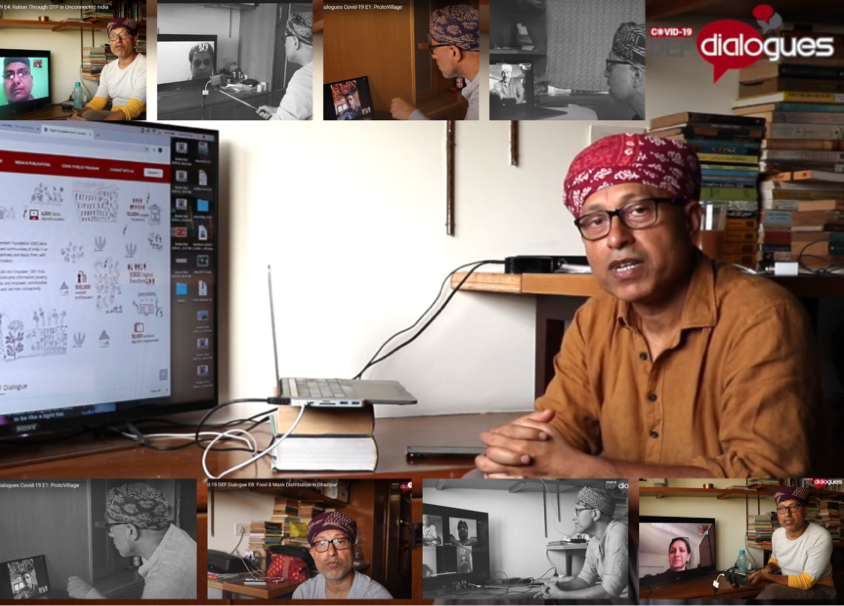