Osama Manzar: The man who travelled to 10,000 villages 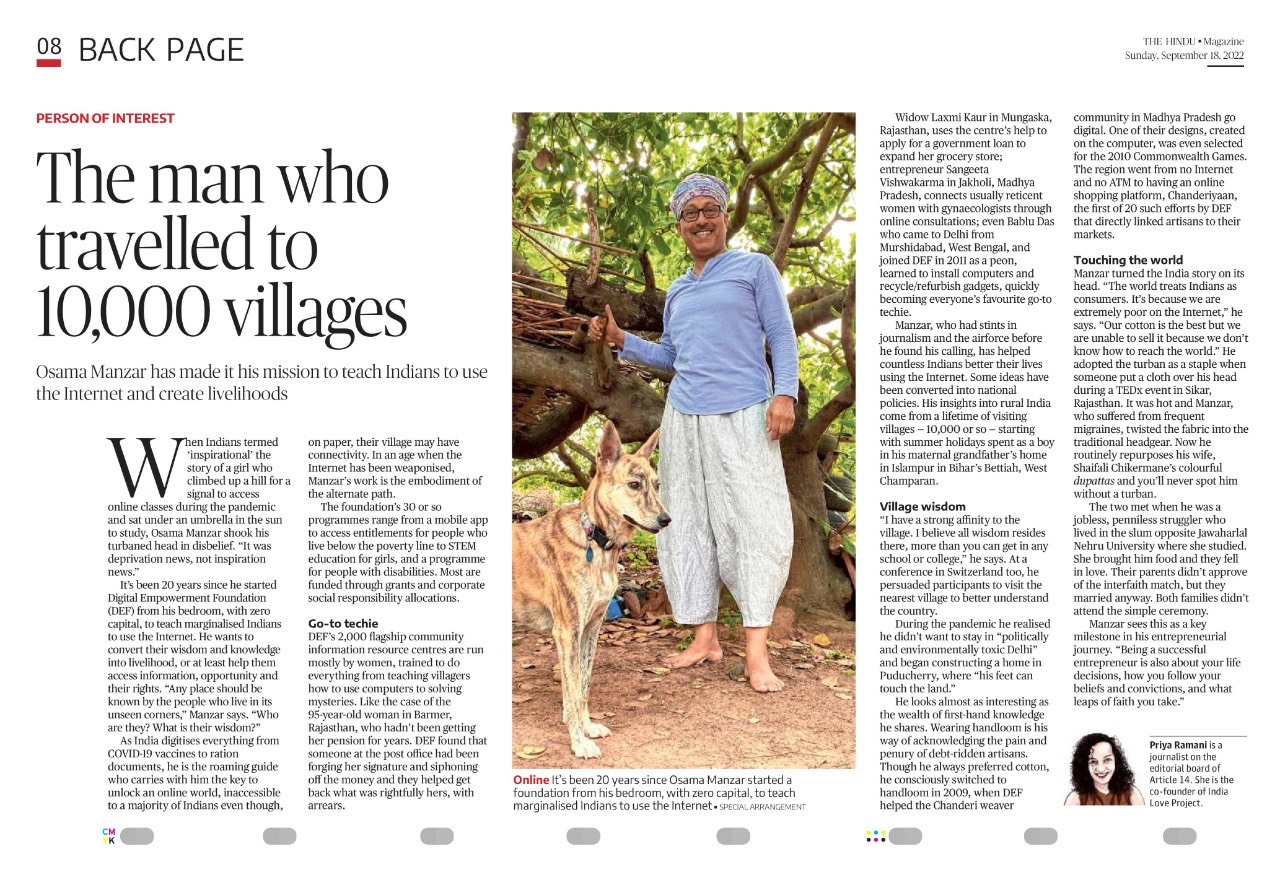 When Indians termed ‘inspirational’ the story of a girl who climbed up a hill for a signal to access online classes during the pandemic and sat under an umbrella in the sun to study, Osama Manzar shook his turbaned head in disbelief. “It was deprivation news, not inspiration news.”

It’s been 20 years since he started Digital Empowerment Foundation (DEF) from his bedroom, with zero capital, to teach marginalised Indians to use the Internet. He wants to convert their wisdom and knowledge into livelihood, or at least help them access information, opportunity and their rights. “Any place should be known by the people who live in its unseen corners,” Manzar says. “Who are they? What is their wisdom?”

As India digitises everything from COVID-19  vaccines to ration documents, he is the roaming guide who carries with him the key to unlock an online world, inaccessible to a majority of Indians even though, on paper, their village may have connectivity. In an age when the Internet has been weaponised, Manzar’s work is the embodiment of the alternate path.

The foundation’s 30 or so programmes range from a mobile app to access entitlements for people who live below the poverty line to STEM education for girls, and a programme for people with disabilities. Most are funded through grants and corporate social responsibility allocations.

DEF’s 2,000 flagship community information resource centres are run mostly by women, trained to do everything from teaching villagers how to use computers to solving mysteries. Like the case of the 95-year-old woman in Barmer, Rajasthan, who hadn’t been getting her pension for years. DEF found that someone at the post office had been forging her signature and siphoning off the money and they helped get back what was rightfully hers, with arrears.

Manzar, who had stints in journalism and the airforce before he found his calling, has helped countless Indians better their lives using the Internet. Some ideas have been converted into national policies. His insights into rural India come from a lifetime of visiting villages — 10,000 or so — starting with summer holidays spent as a boy in his maternal grandfather’s home in Islampur in Bihar’s Bettiah, West Champaran.

“I have a strong affinity to the village. I believe all wisdom resides there, more than you can get in any school or college,” he says. At a conference in Switzerland too, he persuaded participants to visit the nearest village to better understand the country.

During the pandemic he realised he didn’t want to stay in “politically and environmentally toxic Delhi” and began constructing a home in Puducherry, where “his feet can touch the land.”

He looks almost as interesting as the wealth of first-hand knowledge he shares. Wearing handloom is his way of acknowledging the pain and penury of debt-ridden artisans. Though he always preferred cotton, he consciously switched to handloom in 2009, when DEF helped the Chanderi weaver community in Madhya Pradesh go digital. One of their designs, created on the computer, was even selected for the 2010 Commonwealth Games. The region went from no Internet and no ATM to having an online shopping platform, Chanderiyaan, the first of 20 such efforts by DEF that directly linked artisans to their markets.

Manzar turned the India story on its head. “The world treats Indians as consumers. It’s because we are extremely poor on the Internet,” he says. “Our cotton is the best but we are unable to sell it because we don’t know how to reach the world.” He adopted the turban as a staple when someone put a cloth over his head during a TEDx event in Sikar, Rajasthan. It was hot and Manzar, who suffered from frequent migraines, twisted the fabric into the traditional headgear. Now he routinely repurposes his wife, Shaifali Chikermane’s colourful  dupattas and you’ll never spot him without a turban.

The two met when he was a jobless, penniless struggler who lived in the slum opposite Jawaharlal Nehru University where she studied. She brought him food and they fell in love. Their parents didn’t approve of the interfaith match, but they married anyway. Both families didn’t attend the simple ceremony.

Manzar sees this as a key milestone in his entrepreneurial journey. “Being a successful entrepreneur is also about your life decisions, how you follow your beliefs and convictions, and what leaps of faith you take.”

Priya Ramani is a journalist on the editorial board of Article 14. She is the co-founder of India Love Project.
About the author