PCs are taking folk music from Rajasthan to a Global audience 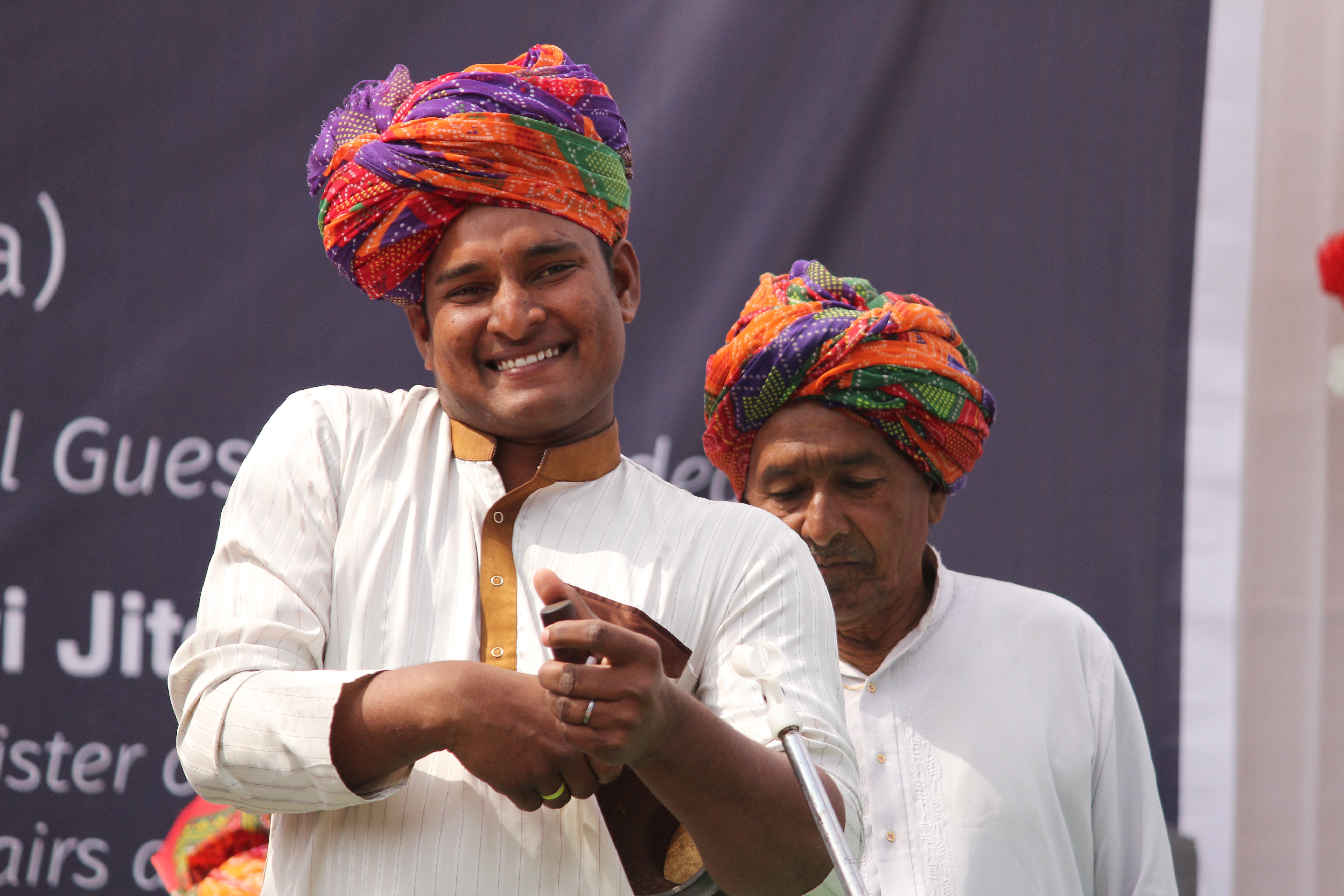 This story was first published in The Better India on July 30, 2016.

Yusuf Khan, now 34, first learnt to operate a PC at the age of 16. Today, technology is an integral part of his everyday life and helping him preserve his rich musical legacy for posterity.

Hundreds of years ago, Khan’s ancestors roamed the deserts of Rajasthan, playing their percussion instruments as accompaniments to tales narrated from Indian mythology.

Today, this resident of Munguska, Rajasthan is using a PC to digitise and immortalise the rich musical tradition he inherited.

PIECING TOGETHER THE PAST

“I come from a long line of bhapang players,” Khan said, referring to the stringed percussion instrument believed to be unique to South Asia.

“We sing about heroes from mythology, recount their stories of bravery and compose odes to the Gods. We have more than 40 folk tales to choose from and each has anywhere between 800 to 900 couplets. For years, these tales were passed orally from one generation to the next. But, of late, artistes have been choosing more lucrative careers than music and there is a real danger of losing our heritage,” he explained.

In 2010, worried about the fate of this art, Khan’s father spoke to a friend who suggested using a computer not just to preserve the music but to introduce it to the world as well.

This encouraged Khan Senior to start sending his young son Yusuf to the free computer training classes conducted by an NGO in a nearby town.

A NEW WORLD OPENS UP

“I had just finished Class 10,” Khan recollected. “I had only heard about PCs but had never operated one until then. Nevertheless, I gathered my courage and made the 10 km trek to class every day. By the end of one month, I had become quite comfortable with using a PC.”

However, once the summer holidays ended, Khan decided to pursue a diploma in civil engineering from a local college and learning more PC skills took a backseat in his life until four years later, in 2014.

“That was the year when the Digital Empowerment Foundation (DEF), the NGO that taught me how to operate a computer, opened a centre in my hometown of Munguska,” Khan said. “I was unemployed and looking for a job when they approached me to become a trainer at the centre. I agreed.”

“In February 2014, I started teaching school-going children how to use PCs. I taught them everything – right from using Microsoft Office, to searching on Google and viewing videos on YouTube,” Khan recalled.

“Despite the fact that I only learnt how to operate a PC when I was 16, here I was, helping young children discover the world of computers…I was ecstatic!” Khan smiled.

It was around this time that Khan first heard of the social media platform Facebook: “I was curious about how Facebook worked and within three months, had set up accounts for myself and my father,” Khan said.

Soon after he had set up his account, an event organiser saw his profile and got in touch with the duo, inviting them to perform at a private function. And from then on, there was no looking back.

THE POSSIBILITIES ARE ENDLESS

“Our performances were initially limited to government functions,” Khan said. “Today, thanks to the power of technology, we are inundated with invitations to perform at venues across the world. Our performance calendar is always full.”

Event organisers reach out to the Khan family over social media, see samples of their work on YouTube and coordinate the logistics of the performances over email.

“We research the organisers and the events using search engines. Finding out that an event has a large social media presence is also extremely reassuring. It helps us pick and choose the right kind of place to showcase our talent,” Khan explained.

Technology has also helped bring different folk music artistes from around the country, closer. “We have created Facebook and WhatsApp groups where we share information about upcoming events, let other artistes know about performance opportunities and trade information about event organisers,” said Khan.

In fact, he has also begun the all-important work of preserving his rich musical heritage. “It is, after all, the reason I first learnt how to operate a PC,” he acknowledged.

Khan records the folk tales narrated by his father and musician uncle. He then transfers the audio files to his PC and begins the cumbersome task of transcribing them in Microsoft Word files: “It is a slow process but one that is definitely worth it to keep our art alive,” said Khan.

He then uploads these files on Google Drive, and shares the transcribed tales with DEF. The organization uploads them on a website it has created for Khan to spread awareness about bhapang and folk music.

It is apparent that using a PC has transformed not just Khan’s life, but those of other small-town folk musicians, helping them immortalise a fast-disappearing musical tradition.

In addition to his work with music, the ability to use a computer has also provided Khan with another income opportunity – he has made quite a name for himself as a trainer. Khan works as a regional manager for DEF and oversees the operation of six computer training centres. He has already taught more than 700 children how to operate PCs.

“Even something as simple as booking train tickets has become easier. Before, come rain or shine, we were forced to camp outside the railway station for the entire night to get tickets. Today, I simply make reservations online,” Khan said.

“Recently, I was in Poland for a concert and I used Skype to talk to my two year-old daughter in India. These are things I would never have dreamed of before!” exclaimed Khan.

He summed up saying, “If I hadn’t learnt to use a PC, I would be exactly where I was many years ago – unemployed, looking for work, and bemoaning my inability to save an art form that is so precious to me”.

Related posts
Kalle Bhai – A man of many stories
October 17, 2016
Shiva is training HIV-infected children in computers to make them financially independent
August 1, 2016
Anita Devi wants to give a boost to her business
July 12, 2016
From Design to Sales – How Digitisation Is Empowering the Chanderi Weavers of MP
June 28, 2016
Lifting the burden of a debt
June 23, 2016
Intervention for equality
June 23, 2016