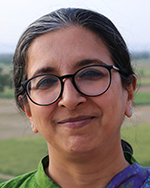 Years ago, when micro finance witnessed a boom, I was a mere foot soldier in the larger war for equality. Our battles were many and our victories few and far between. At one frustration-fraught review meeting, one of our sagacious and pragmatic community leaders had brought us firmly to a watershed with her analysis. In her penetrating voice she had said that the project moved slowly because of information and its inherent processes. First, there was no easy way to reach out to a large number of women in rural Bengal. Second, there appeared no way to ensure that everyone received the same information and not variants of it. Third, we were unable to find ways in which information reached women in a form that allowed them to act on it. In those days of field workers being trained and dispatched to large villages interspersed with larger rivers, regularly isolated by monsoon inundations, this seemed like an impossible task. In Bengal of those days, only its politics had the capacity to deal with information on this scale.

Cut to now. As I see the rapidly snowballing impact of social media, I am often reminded of that workshop where we sat in silence digesting the reality of dealing with information and the agency to act on it. Audre Lorde stated, “You cannot destroy the master’s house with the master’s tools.” To find new tools to challenge and destroy institutions of oppression – whether race, caste, gender or economics – this has been the back-breaking task of those engaged in social change. Social media, today, gives us a glimpse of that elusive new tool. As a development worker for over 25 years, this is my focus on social media – I observe with as much excitement as apprehension.

In its very nature, social media provides a solution to the above conundrum. Social media shares information. It shares it in a format accessible to all uniformly – there is no general compartment/ AC II, AC III and First Class here. In that it does not discriminate at the access stage, social media creates the first step of equality and agency.

Audre Lorde stated, “You cannot destroy the master’s house with the master’s tools.” Social media, today, gives us a glimpse of that elusive new tool”

A plethora of information is shared via social media (unlike the field worker/foot soldier trained only in one) it creates the second step of agency – it allows one to make an informed choice. Today, someone contemplating parenthood can connect to a divers set of groups – of parents with one child, of parents with two children or more, of children with special needs, adopted children, and even persons who choose not to have children.

Social media creates the third step of equality and agency – direct contact. In removing the middleman and connecting the producer to the user of goods and services, social media holds the power to transform economic structures and, consequently, the social and political structures.

But as they say, the sword in itself is only a piece of steel. It becomes a weapon only in the hands of the killer. We all know that our capacity for violence and greed greatly exceeds our potential for equality and justice. It would be naïve to expect that dealing with information and agency at this scale would bring only positive impact. It is still a new tool, with impacts that we cannot yet comprehend fully. Each of us must ensure that we use it to create a better world, not an uglier one.