The English and Digital for Girls’ Education [EDGE]

In the age of Information, literacy of English language and access to technologies will be critical in moving forward and envisioning inclusive growth. 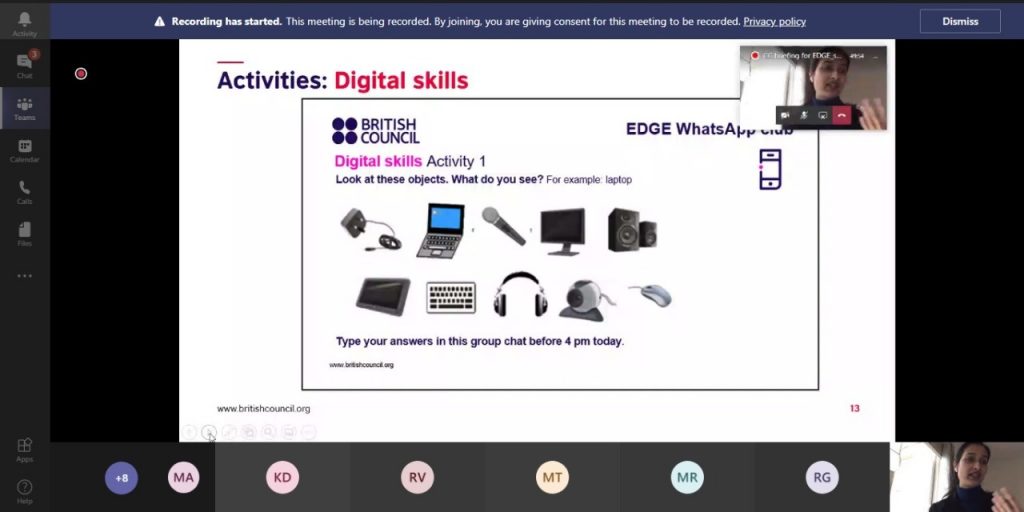 British Council and Digital Empowerment Foundation [DEF] started a flagship programme by the name English and Digital for Girls’ Education [EDGE] with an aim to develop English skills and digital literacy as well as developing confidence and soft skills among girls from marginalised sections of the society in India. Despite education being declared as a fundamental right in 2009, which means education is free and compulsory for every child, India continues to struggle to implement the Act. Education is a critical instrument in social change, but the structural issues of society such as caste, class, religion, gender are still crucial deciding factors in access to education in the country.

The national literacy rate in India is 69.3 percent and that among males is 78.8 percent and females is meagre 59.3 percent. Due to deeply embedded patriarchy in the society, expenditure on education is generally more on males than females. These disparities in education get more troubling in various distributions and stratification. For example scheduled caste and scheduled tribe girls, among these communities the gender gap in education is almost 30 per cent at the primary level and 26 per cent at the upper primary stage.

Education divide and positionality in the society results in a gender based digital divide, leading to imbalanced future skills and opportunities for women. British Council and DEF through community-based EDGE clubs have been inculcating skills among girls and increasing educational, social and economic opportunity, effectively reducing barriers. The programme focuses on enhancing participants’ English proficiency, digital skills, awareness of social issues and empowering them to make more informed and independent life choices. 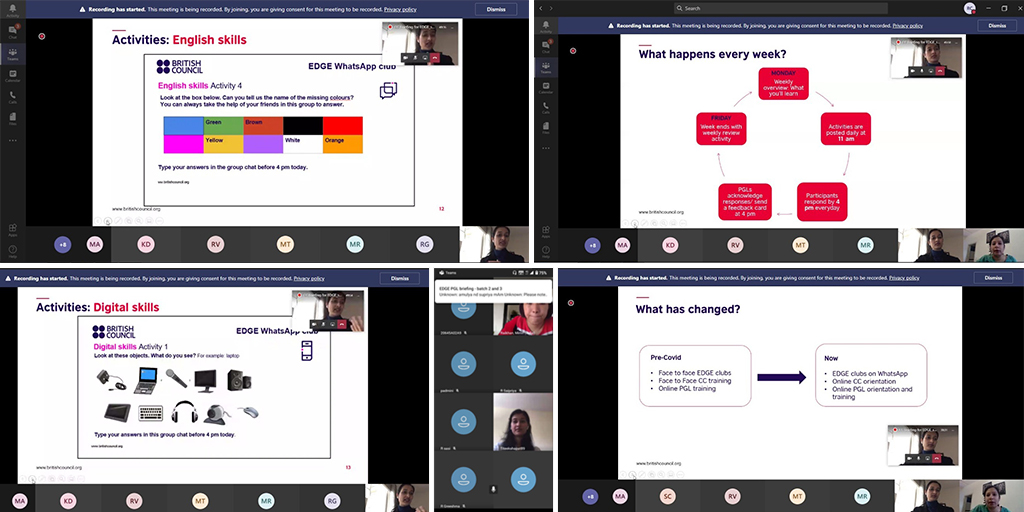 However, COVID–19 pandemic and subsequent lockdown threw a serious challenge in conducting and implementing programmes in 2020. Face to face interactions were almost impossible due to the infectious nature of the virus. A plan was chalked out after conducting assessment of access to technological devices and Internet. In order to be sure that this was feasible and effective, a pilot EDGE WhatsApp club was established for over two weeks. A British Council consultant assumed the role of a Peer Group Leader (PGL) and facilitated the group activities during the pilot. Centre Coordinators and PGLs have been instrumental in completion of the programme. 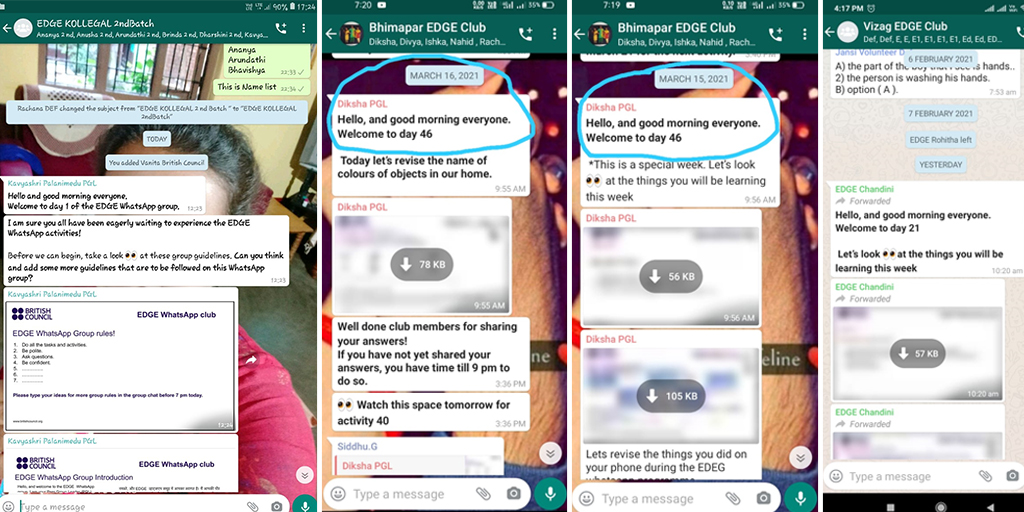 EDGE has so far reached over 17,000 girls across South Asian countries. In India, since the launch of the programme in 2016, DEF has been a critical component. When EDGE embedded technologies in 2019, DEF was delighted to contribute its experience in connecting the unconnected for years through technological interventions. During the pilot, 10 DEF Centre Coordinators from Uttar Pradesh and Andhra Pradesh received four days training to introduce them to the programme and their role. A comprehensive test was conducted over the phone –– due to COVID-19 and subsequent restrictions ––  to select PGLs from the shortlist provided by DEF. Along with motivation, encouragement and making sure participation in the group, PGL’s role was managing the WhatsApp groups by posting daily activities and interacting with the club members. The programme was implemented in two languages: Hindi and English, while maintaining privacy, safety and consent. 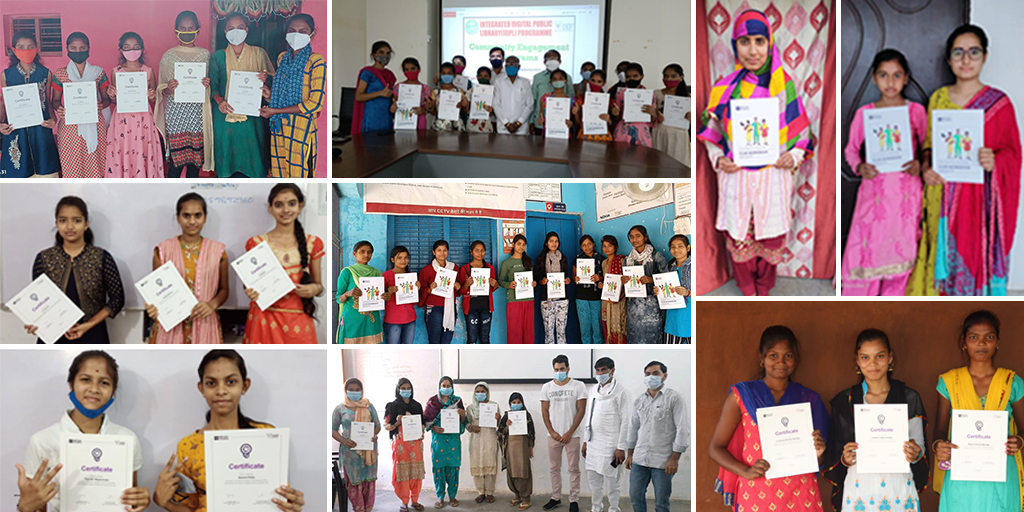 Baseline and endline surveys show that the programme yielded success for participants as well PGLs. Data of ‘Improvement in English and Confidence Level’ shows that there were eight club members at the A0 level, there were none at the endline. Similarly, at the baseline while there were six at the Pre-A1 level, only one club member was at this level at the endline. Data of ‘Preference towards and confidence in using social media platforms’ shows that at the baseline, 15 out of 26 i.e. 58 percent and at the endline, nine out of 14 that is 67 percent gave themselves a score of 4 or 5 on a scale of 1 to 5 (1= least confident, 5= most confident). Similarly, Data on ‘Confidence in posting views/answers on WhatsApp group’ 13 out of 26 that is 50 per cent club members said they were either confident or very confident. This increased to 13 out of 14 club members that is 93 percent at the endline.

Every member appreciated the engaging activities that are shared and posted on the WhatsApp group which shows the curiosity of young girls in learning newer technologies and education. Challenge of accessing smartphones and the Internet for girls remains one of the biggest hurdles in implementing EDGE at ground zero. In the age of Information, literacy of English language and access to technologies will be critical in moving forward and envisioning inclusive growth. The state must approach the issue with social, educational, technological, and legal standpoints.