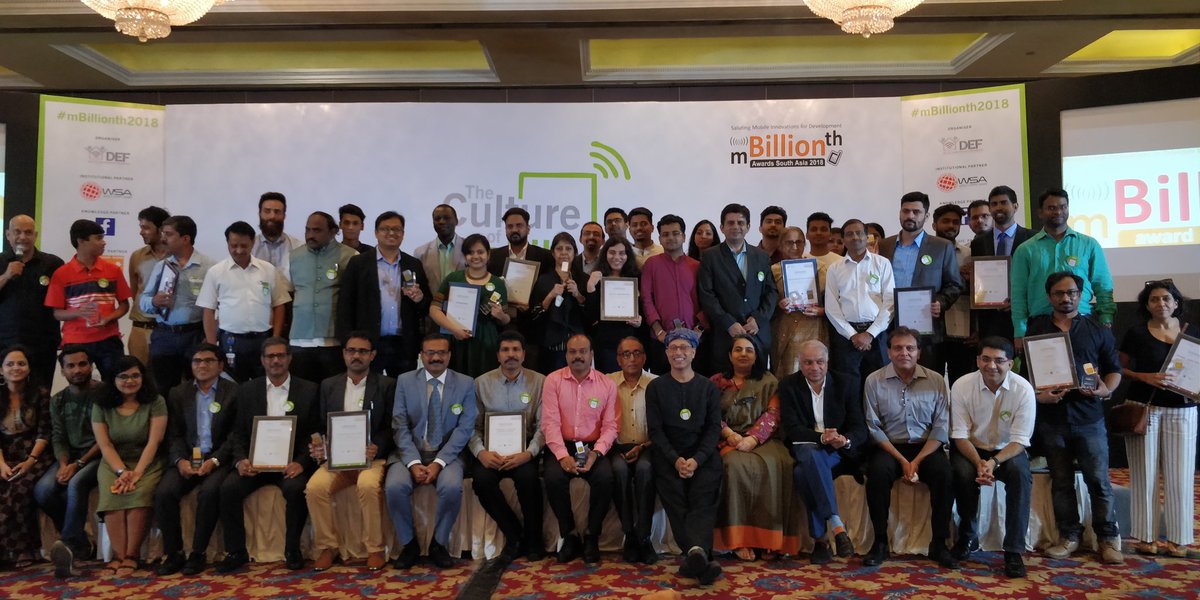 mBillionth Awards is a platform established by Digital Empowerment Foundation (DEF) to identify, recognise and felicitate mobile-based initiatives that are striving to facilitate and enhance their communities. Celebrating such initiatives the 9th mBillionth Awards were held at Eros Hotel, New Delhi, on October 3, 2018. A 16-member Grand Jury, shortlisted around 60 Finalists out of which, 23 initiatives were announced as Winners, four received Special Mentions and two were felicitated with the Chairman’s Distinctions. A complete list of winners can be found here. This year, DEF received a total of 154 nominations from eight South Asian countries. From which 60 finalists were handpicked based on strict but fair criteria. Each of these 60 Finalists showcased their innovations at the mBillionth Awards Expo, which was the hub of dialogue and new discoveries.

Welcoming the Finalists and other special invitees to the Awards Gala, DEF Founder-Director Osama Manzar said, “In 2004, DEF had launched the Manthan Awards with an aim to recognise pioneering Web-based initiatives across India. Back then ‘Mobile initiatives’ used to be a single category in the early years of Manthan, today we are here celebrating an award that recognizes innovation in mobile technology. Over the years, the transition to mobile-based social innovation and mobilisation has grown exponentially. It has brought us together tonight as we inaugurate the 9th edition of mBillionth Awards. Over the years, we’ve seen platforms like Ola and PayTM being recognised on this platform when they were young and barely known.”

Picking on Osama’s note, Policy Programme Manager at Facebook Rajat Arora welcomed the Finalists and congratulated them on their change-making work. He recognised the mBillionth Awards as a sustained platform for collaboration, mentorship and scale-up.

Carrying the baton of innovation forward

This year, DEF received a total of 154 nominations from eight South Asian countries. From which 60 finalists were handpicked based on strict but fair criteria. Each of these 60 Finalists showcased their innovations at the mBillionth Awards Expo, which was the hub of dialogue and new discoveries. Representatives presented their ideas to each other at their dedicated stalls. The creative energy was palpable as innovators brainstormed, found new collaborations and avenues to grow their businesses. A team of mentors and Jury members comprising of: Director (Government Affairs) Symantec Deepak Maheshwari; Former Board Member of PIR Amitabh Singhal; Research Director at YourStory Madanmohan Rao; Senior Manager (Government Affairs) at Qualcomm Anirban Mukherji; Director of Investments at Omidyar Network Bharath Visweswariah; Lead (Digital & Supply Chain) at Bill & Melinda Gates Foundation Suhel Bidani, Rajat Arora and Osama Manzar, went around the Innovation Expo Arena, interacting with each of the 60 Finalists. The Jury, using their expertise, provided key insights to the participants.

Technology is a mirror to our needs, wants, ills and visions.

In an effort to further understand the scope of technology and its impact, a panel comprising of trailblazers in their own field, was asked to discussion on the topic ‘Is Mobile Humane?’ Nilay Kulkarni of Ashioto Analytics, Harsh Songra of My Child App, Mrigank Pawagi of SocialMe and Poonam of SoochnaPreneur shared their understanding of the multi-faceted mobile technology.

Introducing the panelists, Moderator The Gadgetwala aka editor in chief at Tech2, Ankit Vengurlekar quipped, “Most of the great work that is done in the world is done by people who have grey hair or no hair [like Osama] but the technological changes are being brought about by the future of world, the youth. That’s probably why all the panelists are half my age.”

Starting with the youngest panelist, fourteen-year-old Mrigank introduced the audience to WebMe, a mobile-based game for “kids like him” to understand cyber security and safety online better. “What helped me create this Android-based application was the fact that several open source technology options were available for me to experiment with,” he said.

Twenty-five-year-old Poonam, another panelist, first came to Alwar eight years ago after marriage. “In our village, people couldn’t differentiate between a feature phone and a smartphone. It wasn’t until three years ago when I got my first smartphone, and it took me quite some while getting used to it. I had only studied till Class VIII, but I think I started learning again when my family gave me the smartphone. One of my first searches was to look up the recipe of momos and prepare it for my family. Then I went on to learn through my mobile phone, and took exams for Class X. Slowly, I was looking up about government schemes and entitlements to help my fellow community members. I now use an app called MeraApp to enable access to the same, and we go door-to-door to mobile the community,” she said.

The third panelist eighteen-year-old Nilay hailing all the way from Nashik recalled, “When I was nine-years-old, there was a Kumbh Mela of sorts in Nashik (the next one was scheduled for six years later). While talking about this mela, my grandfather told me that about three crore people come to Nashik for this holy festival every six years, and so many die due to stampede. My granddad was normalising these deaths. At the age of fifteen, I got a team to work with me and we brainstormed to find a solution to stampede. We wanted to know two things, the number of people at one location and the rate at which they were passing through each gate. RFID or camera seemed impractical given the scale of population. So that’s how we thought about Ashioto (meaning ‘footsteps’ in Japanese), a footstep management hardware mat. For the first time in 200 years, we were able to report zero stampedes that year.”

Talking about dyspraxia, a developmental disorder of the brain in children that causes difficulty in activities requiring coordination and movement, twenty-two-year-old Harsh shared his story, “It took my parents over nine years to find out about my disorder because we don’t have the right kind of medical or psychological resources in the country. At the age of sixteen, I realised that I am not the only one facing this. One out of six children is facing CBD. So I made an app called My Child App, which is a screening app to detect disorders within a few minutes. Today, the app is used in one hundred and sixty countries but such disorders are still stigmatised. So we created a content platform last year to produce video-based content on mental health and physical disability. As many as 300,000 people are being reached every month through this platform.”

However, while Mobile played an integral role in the lives of all four panelists, the question also arose that whether mobiles can and are only being used for good?

While mobile phone is a medium for communication, information and change, it is also a source of misinformation, crime and threats and we see that taking form around such as trolling, online abuse and hate and other malice part of the digital, online world. To add, N Ravi from the IT Centre pointed out that Mahatma Gandhi was able to change India’s subject-based politics to participative politics without the invention of a mobile phone.

But a user needs to share the onus of responsibility in a growing culture of mobile, presumption and ubiquity of smartphones. “Just like any other technology, mobile phone is both an enabler and a disabler. It can be used for both good and bad. Often the fear of the unknown, however, makes us skeptic. The technology is a mere mirror of the society, it is not the cause of social evils though,” pointed Ankit.

Nilay too stressed that technological skills can be learnt, but it’s difficult to modify intentions. We need to check our own moral compass before blaming the technology.

Reflecting a little bit more on technology, the culture of mobile and the subsequent mobility of culture, a poetry session was organised by Baatein, a platform founded by Chhaya Dabas. To defuse the tension and to appease the audience, patiently waiting for the Awards; Young poets from Delhi, Anurvi Mehta, Reha Malik, Aditya Bhandari and Chhaya performed their renditions on what was meant of the ‘Culture of Mobile’. Poetry finds a way to communicate through ideas and thoughtful verses, and it was a wonderful deviation and contribution to the evening.

On that note, Osama, along with the Jury Members and Friends of DEF, released the book titled ‘The Culture of Mobile’. The book profiles all the 60 Finalists of the awards platform this year, and also lists the 29 awardees of the mBillionth Awards 2018. A complete list of winners can be found here.

A global stage such as mBillionth found resonance beyond the digital borders of India and we hope next year our community increases tenfold and we celebrate the next milestone, innovation and revolution in technology.