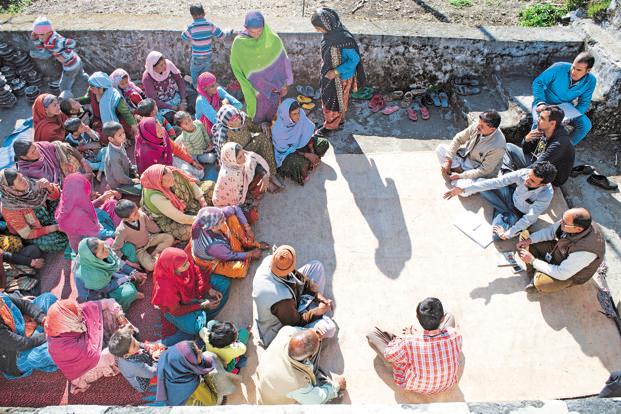 This article was first published in the Mint newspaper on November 4, 2016.

As I have shared several times through my columns, we have close to 200 digitally enabled Community Information Resource Centres in more than 80 districts across 30 states in the country. These are all located in backward districts. In almost half of these centres, we also make special efforts to make government benefits and entitlements accessible to citizens. Our constant involvement with people on the ground and regular discussions with them on various issues have given us the opportunity to understand the role of information in the lives of poor people. It has also shown us how the lack of this information pushes the poor through several layers of exploitation.

We have a system through which information agents (known as soochna sevaks) at our broadband-enabled digital information resource centres are trained to share localized information, experiences, case stories and various citizen grievances through WhatsApp, Facebook or a Management Information System. They are also trained to provide access to relevant, timely and accurate information to underserved communities who are living largely in information darkness. In the past couple of months, we have received hundreds of updates from the ground, including citizen grievances; and some of the stories are absolutely alarming. We have come across several cases where the beneficiaries were either denied their entitlement or were asked to pay a percentage of their entitlement to the banking correspondent (BC).

Remember the time when people didn’t trust private banks in India? Well, the mistrust seems to be shifting towards the state banks now, at least in rural India. I would not name the banks here, but I would like to share some of the complaints that we have received from rural India against public and private banks.

Moti Devi, 70, a resident of Dhanau village in Barmer district of Rajasthan, has been surviving on a monthly widow pension and wages from her MGNREGA work since her husband Kishan Ram died a few years ago. As if the worries of managing the house weren’t enough, the local BC authorized by a state-run bank in the village decided to make her life even more difficult. A few months ago, the BC took a Rs50 cut from her meagre pension and wage earnings of Rs1,750. He did this for a few months without Moti Devi’s knowledge. She showed her bank receipt to a soochna sevak, who discovered the fraud and decided to confront the BC. His reason for taking the cut: “I’m helping her get her  pension.” When Moti Devi protested against this, the BC denied Moti Devi of her payments completely, and said henceforth he will not facilitate her transactions at all.

Hari Ram, 54, comes from a below poverty line family of Shri Ramwala village in Dhanau block. A daily wage earner under MGNREGA, he used to regularly receive his wages through an account in a state-run bank. Two months ago, when Hari Ram went to the local branch to withdraw his wages worth Rs1,600, the BC informed him that he could facilitate the payment only if Hari Ram paid him a commission of Rs300. In dire need of money, he had no choice but to agree, and returned home with Rs1,300. When Hari Ram returned next month to withdraw wages worth Rs1,447, the BC debited Rs1,447 from his account, took his thumb impression, but only gave him Rs1,400. When Hari Ram asked for a receipt of the same, the BC simply refused and said no bank could provide a receipt for this. When the matter was raised at the panchayat, the BC refused to budge and asked Hari Ram to move his account to another bank.

Chaina Ram’s household in Kumbhaniyo Ka Tala village runs on his monthly old-age pension. When he visited the local bank last month, seeking to withdraw Rs2,000 received under the Bhamashah Yojana, he got just Rs1,600. When he questioned the authorized BC, the latter said Rs400 had been deducted for updating the passbook and delivering it to his home.

This is the state of affairs in the villages, where often an entire family survives on less than Rs201 a day. This is the state of affairs at the so-called “trusted” banks. Last year, when a consortium of civil society organizations took out the 100-day Jawaabdehi Yatra or Accountability Journey (under their Soochna Evam Rozgaar Adhikar Abhiyan) across all the 33 districts of Rajasthan, they collected as many as 1,626 grievances related to pensions alone.

In fact, the least we need is a digitally enabled public grievance system which can take and accommodate each and every grievance it receives (in various forms of the media) to be addressed in a given time frame, failing which the official or department concerned would be subject to penal action.