Women of Yalgud, claiming their agency over technology

Kalapuri collaborates with roughly 150 female artisans in the thriving village of Yalgud, some 30 kilometres from Kolhapur, to create imitation jewellery inspired by traditional Maharashtrian designs. The women have a great deal of expertise and curiosity to learn new things. Majority of them are from the Jain community with sound financial background. Some are pursuing their higher education, some have already earned bachelor’s degrees, and most have completed their 12th grade. Aishwarya Patil, one of the cohort members, is pursuing a PhD in nanotechnology. They view craft through the lens of social agency and independence and had the same perspective towards the Digital Literacy training by Creative Dignity (CD) and Digital Empowerment Foundation (DEF). Though the majority of them belong to households with smartphones, they have never had access to them because; either the men in the family didn’t think they were necessary or the women lacked the knowhow. This has forced women to rely on family members to be able to use the technology. Hence we had the belief that their confidence, self-worth, and merit would increase manifold as they learned more about the digital world. 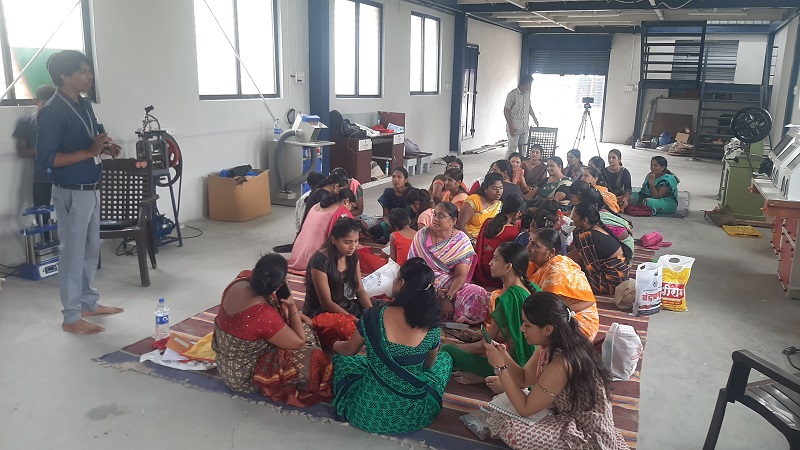 From June 21 to June 24, 2022, 25 to 30 women craftsmen in Yalgud received the contextual digital literacy training under Mr.Vikas Bhalerao from DEF, supported by Mr. Raju Bhagoji and Mr. Shridhar Vaidya from team Kalapuri. Bhakti Tirthani, from CD was there to learn and experience the training with the artisans, understand how they were grasping things, what the challenges were,to solve doubts and speak about modules like photography, catalogue making, using social media, etc. when required.

Following brief introductions on the first day, the women showed us their new Common Facility Centre (CFC) for creating jewellery as well as the equipment they would soon begin using to handle their own raw materials. They were just as enthusiastic and apprehensive about the smartphones as they were to operate their newly bought jewellery machines. With instances of weavers who have expanded their enterprises, promoted their craft, and done much more with the aid of mobile phones, Vikas began by explaining how phones have changed artisans’ lives for good and gradually their apprehension turned into excitement.

We immediately created a WhatsApp group for the workshop. Most of these ladies were familiar with how WhatsApp worked, with the exception of a handful who needed assistance scanning a QR to join the group; further facilitating our ability to assess their comprehension of everyday apps. They quickly listed many ways in which smartphones benefit them and how they could help them further.

Following the mention of words like “WiFi,” “SIM,” “4G,” “calls,” “photos,” etc., we reasoned that we should expand on their knowledge of the phone and find fresh information in the settings. We all examined the options for the display and brightness, the SIM, how to share a data hotspot and have other devices connect to it like a wifi network, etc.

The cohort was divided into smaller groups of 4-5 with a monitor or leader of sorts in each, ensuring everyone in their group understood and practised what was being demonstrated. As they explored the settings, it became clear who the fast, tech-savvy ones were within the cohort. All the ladies decided to give their groups names based on the villages they admired, and to share what they had learned after the session in a topical presentation.

The women were most excited to learn about photography and we started discussions about features that enable taking clear pictures like switching the grid on, using the pro camera, adjusting white balance, focus and exposure settings, etc. All of us clicked many pictures on our phones, and discovered more about good composition as we kept shooting. Everything around was photographed, from machines to jewellery and from friends to the plants! After clicking pictures we also learned to organise and back them up on google drive. 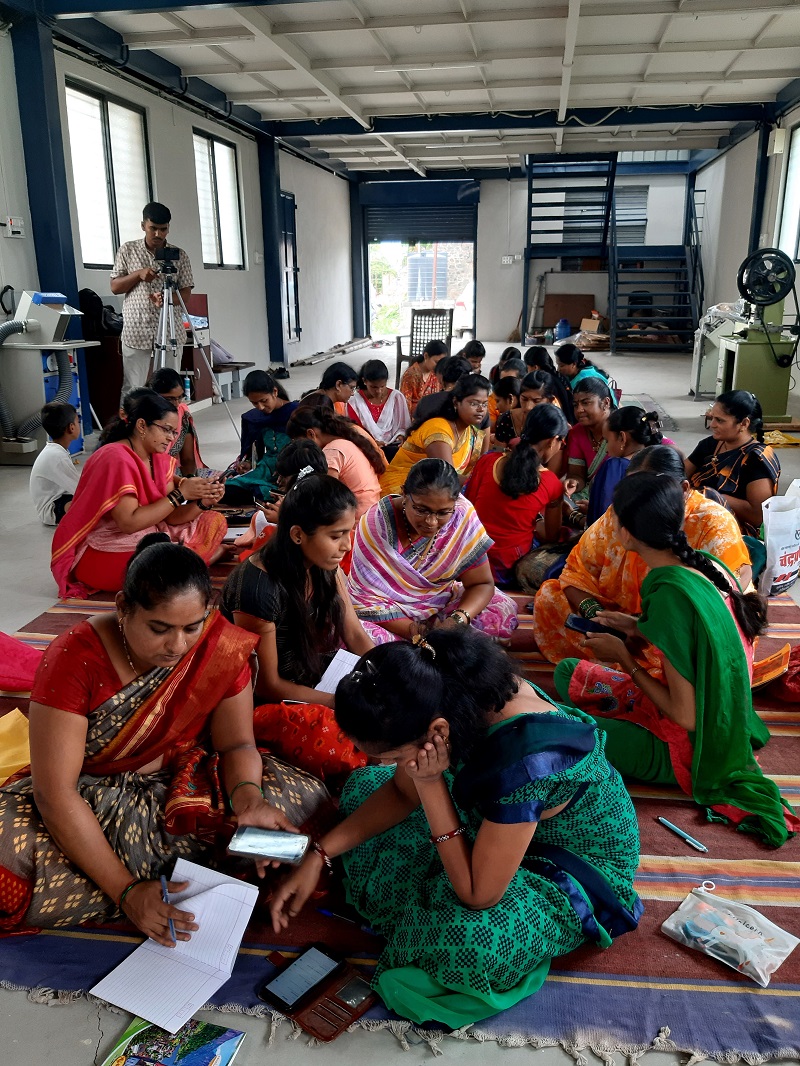 From photos we moved on to graphics! Everyone was quick to install canva on their phones. After learning the basics of using and customising templates, adding and editing text and images and more, everyone experimented with creating WhatsApp statuses, graphics for birthday wishes, and for promoting their household businesses like cake-making and their husbands’ garages and dairies! It was invigorating to watch them apply the new learnings to avenues beyond their craft and to see updates on WhatsApp, even at night, when they practised and asked their doubts after completing chores at home.

The second day was dedicated to creating catalogues and using them to engage with customers. In order to produce these catalogues, we looked at mediums like canva and google slides as well as sample catalogues that not only effectively presented items but also provided artisan’s story and accurate product description. Finally, The women tried their hand at catalogue-making, again for the craft and their other family business endeavours.

The third day started off with a feedback session of the previous two days. Most women were excited about creating graphics they see on posters, Whatsapp etc. And ready to explore more with their new found confidence!

We then took up introduction to digital marketing and mentioned various social media platforms to them. We started with YouTube, looked at searching and browsing there, learning from videos, etc. Some of the younger ones were familiar with the platform and had also tried Vlogging themselves! The others then created a channel to experiment. At first they were shy about posting on the platform so as to learn. When we assured them they can choose to keep their videos private, they agreed and tried their hand at both YouTube shorts and the long format videos.

We then looked at Facebook, everyone who didn’t already have an account had to create one. Again, some had inhibitions, like the men in their families not permitting them to be active on social media. When we told them that they could choose to use it solely for business purposes, they decided to open the account and convince their families of the same. We spoke of how one can put up a descriptive bio, put up profile and banner images and make/share posts. Some also tried searching for long lost friends and connecting with each other, etc. We moved on to making a Facebook page for their businesses and craft and discovered various features of a page. The women tried creating posts on the page too.

The next day we looked at two other platforms – Instagram and Twitter. The women were now much quicker at opening their accounts, searching for and following other people, etc. On Instagram, we spoke of professional and personal accounts, posting, putting up stories, etc. They were now ready to explore the world of posts and stories and hopefully get inspired to create content themselves.

After this they were introduced to WhatsApp Business, briefly. They were told about what a business account does, the features like creating catalogues, pre-decided responses to customer queries, etc. With the time crunch, it was difficult to try making a catalogue and setting up a functional account during the workshop. But seeing they could grasp most of what was said, they were told to try setting one up at home and ping in case of questions.

Finally we learned about selling on Amazon. Again accounts were created, how one could buy something, register themselves as a seller, put up something to sell was discussed, what are the details product descriptions should contain etc were also listed. The idea of making money through Amazon excited them! They were also excited to see how they can promote their Amazon products by posting links on their fresh Facebook pages and Instagram accounts! Seeing them connect the dots of different digital learnings, gave us a sense of accomplishment.

In the end, their overall feedback about the workshop fed this feeling of accomplishment even further! All of them were very happy to know their phones beyond simple calls, messages and WhatsApp. They were confident that the new learnings will not only help them grow their business but also explore more in the digital world and make decisions in this world themselves. They also were keen on passing the learnings on to their kids and friends. In fact, the number of women who came to the workshop increased everyday as the women would go and tell their friends about what they learnt each day. Many of them also showed interest in further in-depth training and were excited about the Artisan DigiPreneur program.