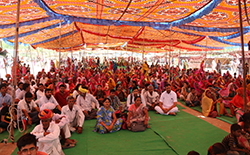 On May 1, when the world was celebrating International Labour Day, Digital Empowerment Foundation (DEF) was a part of the celebration in Bheem in the Rajsamand district of Rajasthan. On the occasion, DEF’s founder Osama Manzar received an invitation from an organisation called Mazdoor Kisan Shakti Sangathan (MKSS) to attend a gathering of workers in Bheem. Bheem is a small tehsil where about 10,000 people have been gathering every year for the past 26 years to attend the Labour Day Mela.

The fair at Bheem is like any other regular mela with many stalls selling clothes, jewellery, toys and food, with a vital difference because it is organized by and peopled with workers of the region. The fair had a few swings for visitors to have fun and there was a pervasive air of festivity. When DEF decided to attend the mela, we decided to not just be a part of the crowd but also contribute in some way to the gathering. So we made arrangements to set up a stall, called Digital Choupal, to showcase and sell various digital tools and services.

It was our first attempt to do something like this and our intention of setting up a stall at the fair had two aims. We wanted to make digital tools and services available to the marginalised and underserved rural community, and we also wanted to conduct a market study to gauge how villagers would react to a stall such as this.

The response we received was much higher than we had expected. There was a huge demand for solar lamp-cum-mobile chargers, secondhand smartphones and pen drives. In fact, we ran out of secondhand mobile phones within minutes; people even complained that we had too little stock. Then there were many people who requested if we could sell pen drives with pre-loaded entertainment or educational content. They were willing to pay Rs. 20 extra for it.

We had also made arrangements so that people could come to our stall and avail of digital services like photocopying, printing and lamination at nominal prices. They could also submit their grievances related to government entitlements or apply for a particular government scheme under which they wanted benefits.

In the six hours that our stall was open, at least 3,500 people from all age groups visited it. The adults were keen on buying solar lamps to use when there are power cuts or to charge their phones when there was no electricity. The youngsters wanted to buy the latest smartphones in the market even if they were secondhand. Parents were keen to ask about the advantages of a computer tablet or a pen drive for their children’s education. The children wanted the cool wristband pen drives to store their favourite songs.

For the children and the youth, we had also planned some interactive activities to show them that digital was not only about learning and education but also about entertainment. We screened short comedy films for them, spoke to them about Charlie Chaplin, set up a photo booth to get funny pictures clicked, and let them compete for the top score on Temple Run, a game on mobile phones.

Interestingly, after we announced that the top scorer would get a tablet as a prize, it was fun to see the queue become longer and more energetic. Parents, too, suddenly became excited. Unlike an hour ago, they wanted their kids to participate and win, even though every turn cost them Rs. 20. One mother even scolded her child when he could not beat the top score.

It is a myth that people in the countryside are not interested in digital tools. In fact, our 150 centres across rural and semi-rural locations in India are proof of that. Now we also know that rural India is clearly eager to not just use digital devices but also buy them. If they are provided these gadgets and services at affordable rates, they are more than willing to buy it. They know the advantages of various digital tools and services and, if they don’t, they won’t just walk by but will stop and inquire.

We would like to take this opportunity to tell you about MeraByte, a movement we launched a week after we returned from Bheem, energized by efforts that saw an overwhelming response. In an effort to make digital tools and devices available to the marginalised and underserved rural population of India, DEF has started MeraByte to encourage people to donate all kinds of old and used but functional mobiles phones, tablets, pen drives, SD cards, laptops, cameras, LCD screens, projectors and any other digital devices or accessories.

We would like to request our readers to donate generously so that we can reach these products to the people in rural India. Readers can contact us through this form.