The Idea of Change 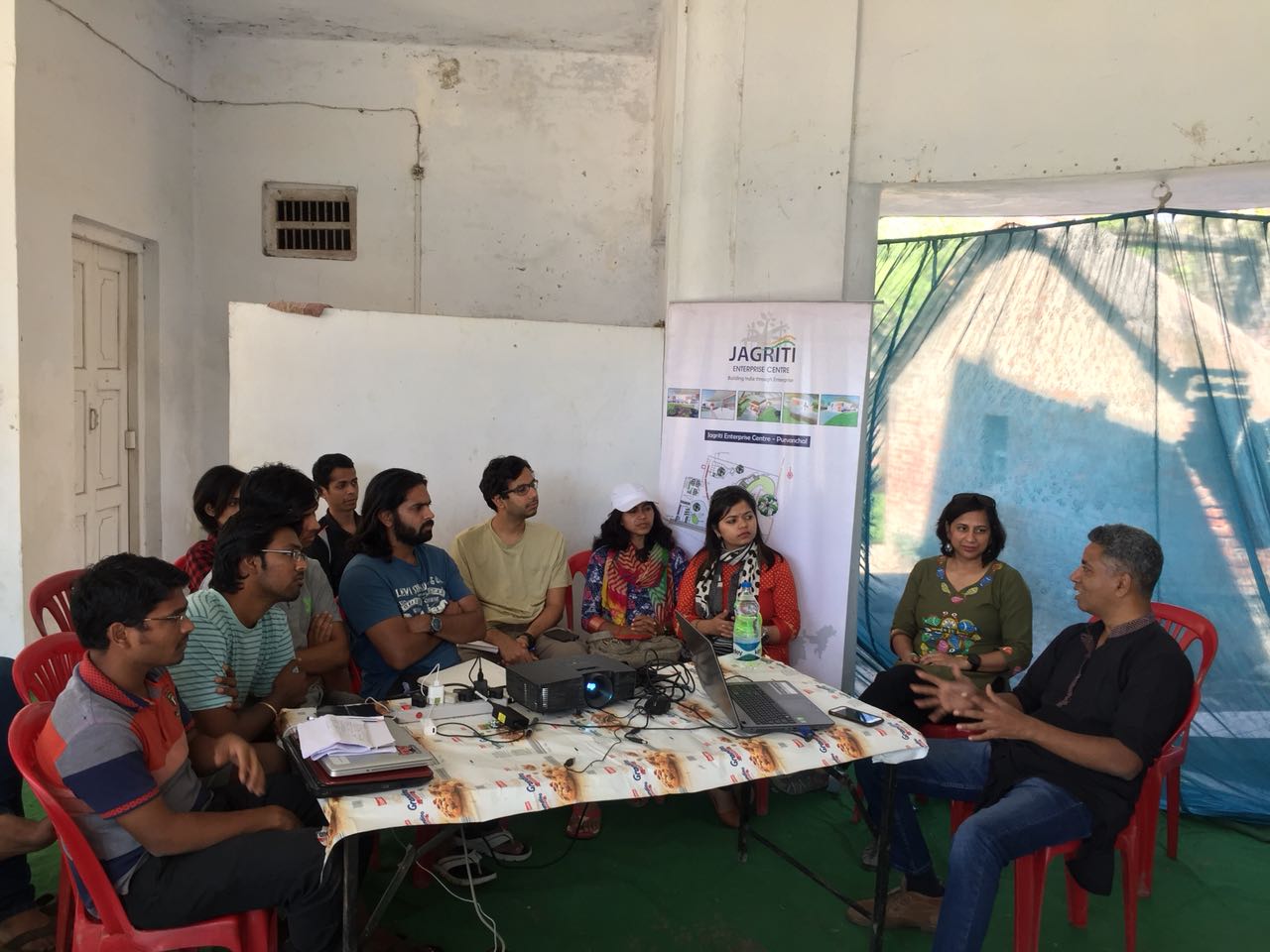 I didn’t know where Deoria was when I first heard that I had to make a trip there. I was told that it is near Gorakhpur in Uttar Pradesh. When I shared with others that I’m going to Deoria, they immediately affirmed, “Oh! Uttar Pradesh”. I was embarrassed not knowing something that was common knowledge for all around me.

I was traveling to Deoria to mentor a bunch of young aspiring social entrepreneurs, selected under the Biz Gyan Tree Programme (BGT), by Jagriti Yatra team.

Jagriti Yatra is a nationwide annual train journey to promote the vision of “Building India through Enterprise”. It takes 450 highly motivated and carefully selected candidates on a 15-day, 8000-kms national odyssey, introducing them to the role model entrepreneurs of India. The aim is to awaken the entrepreneurial spirit—both social and economic —by exposing the youth to individuals and institutions that are developing unique solutions to India’s developmental challenges.

The BGT exercise encourages yatris passionate about ideating and building things from scratch to put together the building blocks of an enterprise. Young people from different parts of India come together in an unfamiliar environment, overcoming barriers posed by language, geography and culture, among others, to create an enterprise.

The nearest airport to Deoria is Goarakhpur. It is a small airport. So it doesn’t have the infrastructure of a big airport. When we got off the plane, we didn’t know where to go. There was no dedicated personnel to guide the passengers. Nobody was willing to take the lead, so we just stood there next to the plane. Then we saw a potbellied policeman gesturing in a certain direction from a distance. Taking the hint, we began to walk in that direction.

One foreign passenger curiously walked a little away from the group and took a photograph of the airport from his camera phone. The policeman agitatedly ran towards him, and demanded to see his smartphone. The foreigner nervously obeyed. The policeman insisted that the photograph had to be deleted, because Gorakhpur airport happens to be a military base. We were perplexed, as we observed the whole drama.

Interestingly, anybody could’ve taken a photograph before the policeman showed up, and no one would’ve known.

The policeman represents one end of the spectrum, where defunct orders are followed just for the sake of it, without thinking, understanding or awareness. Become a cog in the wheel, as opposed to inventing one. The world of mindless followers; the herd mentality. This is how 98 per cent of the people are.

It was hot. The roads were bad. Deoria is only just over 60km from Gorakhpur, but it took over a couple of hours to reach.

Traveling through Uttar Pradesh is an experience in itself. This is the India we are familiar with. Uttar Pradesh has been covered extensively in photographs, films and literature. It is the largest state in India; and so it wields immense power, politically. A saying goes, “The political party that controls Uttar Pradesh, pretty much controls the government of India, either directly or indirectly.”

Uttar Pradesh is the world of extremes. Those who have money, have lots of it; and those who don’t, don’t have any. Economic gap is stark, which is clearly visible in the way people dress, and the wheels they possess. There are many SUVs on the road; but they are not outnumbered by people gone pale, under the hot beating sun.

Deoria is a small dusty town, not unlike other towns in the state. Bihar is just a few kilometres from here. So there is lot of Bihari influence in this region. People speak Bhojpuri, and ‘Litti Choukha’ is a popular dish here.

The hotel that I was staying in was preparing for a marriage party that night. By evening, the road leading up to the hotel was completely jam-packed, with most of the mid and upper ranged latest cars one can think of; Eco-Sport, Skoda, Scorpio, etc. The ladies were in expensive silk saris, bedecked with heavy gold jewels; and men were dressed in expensive sherwanis and three-piece suit. My first night in Deoria was spent amid blaring songs, and sound of revellers dancing and making merry. I vicariously enjoyed being in the party.

Jagriti Yatra team was camping in Barpar, a village 10 km from Deoria city. The village is straight out of Shah Rukh Khan’s DDLJ. It is not a normal Uttar Pradesh village. We drove through beautiful lush fields of rice, on smooth curvy roads. The houses in the village were big, with an SUV parked outside most of them. It looks like a village of zamindars or feudal lords. Interestingly, despite all the prosper, defecating in the open is still a norm in the village. I guess, materialistic richness does not guarantee mental enrichment.

Jagriti team was housed in a beautiful old haveli; the haveli of Alka and Shashank’s great-grandfather. Shanshank Mani Tripathi is the founder of Jagriti Sewa Sansthan, and Alka Tripathi heads the Jagriti Yatra Programme.

It is always an enriching experience meeting young, ambitious, and free-thinking individuals; the 2 per cent who represent the other opposite end of the spectrum vis-a-vis the policeman. Aspiring social entrepreneurs that the BGT programme had brought together, were all of the above, and more. They all had come from diverse backgrounds, and represented different states. I was especially touched by their humility, and willingness to learn. Some were experiencing actually living in a village for the first time, let alone a UP village. They all had great ideas, and capability to realize them. Here I’d like to comment on our education and social system, which is truly defunct. We are geared towards creating assembly line clones, instead of independent and free thinking smart individuals. We all want change, but none of us want to be the one to bring it, because it takes leap of faith into the unsecured unknown. Most of the fellows came from engineering background. Their parents had pushed them to do engineering, but they want more from their lives. It is not easy being a rebel with a cause. Nothing in our education and social system prepares us to be an entrepreneur, especially if we come from a normal middle-class Indian family. It’s a long hard journey of constant learning through failures.

I was supposed to take a session on media and communication with the fellows. They were sitting before me with a glint in their eyes, expecting me to give them some magic mantra to success. Can’t say I was not under pressure, because I didn’t want to disappoint them. What can I tell them that they don’t already know? So, I began with the art of communication through story-telling. We spoke about interesting characters from mythologies, like Ram, Ravan and Krishna. How the dynamics and orientation of the characters change with the way we perceive them. Some thought that Ram was a hero; and for some Ravan was nobler than Ram. Krishna could have prevented the famous battle of Mahabarat, but he didn’t. He was a vicious person to have allowed something like this to happen, which caused so many people to die; but understanding Krishna’s perspective is equally important. It came to a point, when it was hard to say who was taking the session, as I got into my rhythm, and fellows warmed to me. We discussed freely, and enriched each other. I think the families don’t travel, talk and discuss much anymore. We don’t even do that amongst our friends. If we did, then we would have no use for programmes like Biz Gyan. I didn’t have to tell them anything new. We just discussed and refreshed our common sense and knowledge; and listened to each other’s perspectives openly, with a free mind. We are living in the digital age, where information is just googles away. This is definitely an advantage, but it is also taking away our innate sense of knowledge. We have lost the ability of perceptive decision-making. If Einstein would have done the right thing in his time as per social norms, he never would’ve become Einstein.

Intelligence comes to naught, if it is not supported by the right personality and attitude.

Jagriti has got its logo from a ‘Banyan Tree’, which is standing in the middle of a field close to the haveli in Barpar. Young entrepreneurs took me specially to see it. It has been their focal point right from the time they have arrived here. It inspires them, and they spend a lot of time under it. They informed me that Mangal Pandey fought his first battle with the British in this very spot, around this Banyan tree. That makes the tree more than a century old. It looks dramatic, with its incredibly wide trunk, and roots hanging from above; like a piece of art, carved to perfection by nature. I was awed by the magnificence of its sheer presence. There is also a small temple under the trunk of the tree. Perhaps, that is why it still survives.

During the session we played a story-making game. In this, one person starts with a sentence, and everyone else has to add one sentence to it one by one. We do few rounds, at the end of which all the sentences uttered by the individuals, should come together to form a cohesive story. When we were playing, despite my urgings and entreaties, everyone was adding random sentences, which had no connection to the previous one. I was getting frustrated, because it seemed we were failing to create a story. At the end of few rounds, when I sceptically got to rearranging the sentences, I couldn’t believe it. It began to make sense. There was a definite method to the madness. I could not see it because I was blinded by my own pre-conceived thoughts and agendas. When I looked at it with a fresh and open mind, it all came together. We had created a wonderful story. The thoughts that seemed random earlier, had a design to them, leading to a common cause. Just like our fellows, who come from different social and economic backgrounds, and world view; but they are synchronized in their thoughts, passion and drive.

I hope we have more of them.