Dissemination of information about MGNREGA 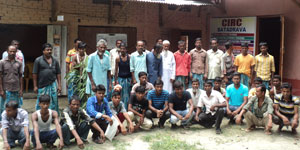 Mahatma Gandhi National Rural Employment Guarantee Act (MGNREGA), 2005 was undertaken by the Govt.of India in order to provide for the enhancement of livelihood security of the households in rural areas of the country by providing at least one hundred days of guaranteed wage employment in every financial year to every household whose adult members volunteer to engage in such unskilled work. This act extends to the whole of India including the states of North East India but except for the state of Jammu & Kashmir. It provides for the minimum wages to the workers enrolled under the scheme in purview of the minimum wage fixed by each concerned state government under section 3 of the Minimum Wages Act, 1948 for agricultural labourers. Every person who has done the work given to him under the Scheme shall be entitled to receive wages at the wage rate for each day of work.  The disbursement of daily wages shall be made on a weekly basis or in any case not later than a fortnight after the date on which such work was done. Moreover, if an applicant for employment under the Scheme is not provided such employment within fifteen days of receipt of his application seeking employment or allowance, the date on which the employment has been sought in the case of an advance application, whichever is later, he shall be entitled to a daily unemployment allowance.

All the functions and duties under the scheme are constituted and discharged by the Central Employment Guarantee Council. The State Government shall, by rules, determine appropriate grievance redressal mechanisms at the Block level and the district level for dealing with any complaint by any person in respect of implementation of the Scheme and lay down the procedure for disposal of such complaints. The District Programme Coordinator and all implementing agencies in the District shall be responsible for the proper utilization and management of the funds placed at their disposal for the purpose, of implementing a Scheme. The State Government may prescribe the manner of maintaining proper books and accounts of employment of labourers and the expenditure incurred in connection with the implementation of the Act. All payments of wages in cash and unemployment allowances shall be made directly to, the person concerned and in the presence of independent persons of the community on pre-announced dates. The Programme Officer shall enter every complaint in a complaint register maintained by him and shall dispose of the disputes and complaints within seven days of its receipt and in case it relates to a matter to be resolved by any other authority it shall be forwarded to such authority under intimation to the complainant.

The panchayats comprising the Batadrava block in Nagaon district of Assam are Amlakhi, Batadraba, Bhumuraguri, Bilotia, Dhanaiyabheti, Dhupaguri, Kandhulimari, Katahguri, Kodomoni, Rampur Satra, Saharia, Silpukhuri, Sologuri, Tuktuki and Upper Dumdumia. The population is primarily engaged in agriculture. However, certain sections of the population are also engaged in government services and self employment as a means of earning livelihood.  The young generation is mostly literate, attending to schools and colleges in and around the Batadrava block. There are also a few private English medium schools in and around Batadrava catering to the people of the area. However, certain sections of the population are not literate and are also ignorant about their rights and privileges. The number of individuals registered under the scheme from all the above mentioned panchayats are eighteen thousand eight hundred and thirty one (18831). The number of individual bank account holders is one thousand three hundred and ninety nine (1399). The number of individual post office account holders is ten thousand three hundred and eighteen (10318) and the number of post office joint accounts is thirty two (32). However, the number of individuals not holding a bank or post office account is seven thousand and thirty nine (7039).

The CIRC Batadrava has played a vital role in dissemination of public information in the Batadrava block since its establishment in July 2014. Out of four components of the centre one primary component is to empower the rural masses with relevant public information. The centre initiated a training programme wherein a few young people were trained in Internet surfing. The trainees successfully quarried information from various websites including the website of the Department of Rural Development regarding MGNREGA.  Through this drive information about the total sanctioned amount was provided to more than one thousand (1000) job card holders; the job card holders were otherwise ignorant of this relevant piece of information.

The CIRC plays the role of information dissemination through its community volunteers who are selected from each panchayat area. These volunteers are local individuals who have adequate knowledge of the locality and the dialects; they have the capability to disseminate information without much difficulty. They act as the eyes, ears and mouth of the CIRC. The centre has so far been able to empower and mobilize one thousand (1000) MGNREGA job card holders under the Batadraba panchayat, the workers were familiarized with their rights and deprivations as informational facts at the ground are distorted. The necessary information in regard of their rights is kept under cover by various government officials from top to bottom of the hierarchy. Hence, in early September when the CIRC volunteers had spread the researched information regarding the amount sanctioned and the nonpayment of dues to job card holders comprising of minimum wage and unemployment allowances; it came as a wave of shock to the masses. The locals mobilized themselves with help from CIRC Batadrava. This wave of shock turned into an agitation and people started protesting against the District Programme Coordinator and the Programme Officers. This act of protest involved lodging complains with the police and the local media against the officials. As a result, the officers were compelled to pay the job card holders. However, even after such effort the payment recovered from the officials were partial in most of the cases.

After this incident CIRC Batadrava is all the more inspired to take up such initiatives; now knowing the fact that information can empower people and change their lives. Hence, the centre has started to provide SMS alert based service to a few subscribers. But, at the moment the service is limited to a few due to language constraint.

However, the total number of registered workers under MGNREGA comprising the other districts is eighteen thousand eight hundred and thirty one (18831), at the moment the centre could target only a few more than thousand (1000) MGNREGA job card holders but the scope for this project is huge.  And the CIRC Batadrava aims to cover the entire population of the block efficiently through its various programmes.