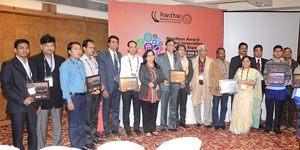 With great humility and at the same time great pride we at Digital Empowerment Foundation (DEF) heard these words being explicitly stated by a very senior official of the Ministry of Communications and Information Technology of the Government of India at the Indian Habitat Centre, New Delhi on December 4, 2014.

The occasion was the annual Manthan Awards, which we at DEF instituted way back in 2004 to identify and reward just those individuals and organisations who are inspired by this motto, driven by it and have taken bold, innovative steps to do it here and now – provide Internet access to people in India and elsewhere, empower them and demonstrate in practice how Information and Communication Technologies (ICTs) can bring about socio-economic transformation.

We are humbled because this is the 11th time we were organising the Manthan Awards which we created and implemented only to uphold this motto, only to realise this mission. This is the mission that has driven us at the DEF for the last 12 years of our existence and we are humbled to know and see that the Digital India programme launched by the Indian Prime Minister and the views of senior officials of the Government of India now reflect that this is not only our mission as humble citizens of India but it is also a national mission that the Indian government itself has taken up in real earnest.

We are proud because we find ourselves vindicated. The 11th Manthan Awards once again identified and rewarded ICT interventions in development that seek to provide Internet access to people here and now not only in India but across 36 countries throughout South Asia and the Asia Pacific. In this corner of the world, we have been doing something for the last 11 years that is now getting national and international recognition in an increasingly and explodingly satisfying way. We at DEF do not want to rest on our laurels but we are proud nevertheless. This recognition, we are sure, will drive us to achieve further excellence in the years to come in our attempts to bridge the digital divide and provide Internet access to people, here and now.

As usual, the day-long glittering Manthan Awards function this year too was graced by the presence of dignitaries from various countries and fields. All dignitaries present were in praise of the thought process underlying the awards and the way they were contributing to bringing about digital inclusion in the everyday lives of people in one way or the other.

The awards, which were fiercely competed for, by almost 400 entries from 36 invited countries in13 categories ranging from education, women and children, health and inclusion and accessibility were kick-started by Osama Manzar, Founder and Director, Digital Empowerment Foundation. “We have a very decimal role in what we are calling Digital India,” Manzar said in his inaugural welcome speech that was followed by a panel discussion onthe topic “Access for All”.

Focusing on how digital innovation serves as a tool for universal access, the session discussed and explored the various ways the Government and civil society organisations can work in tandem to enable 80 percent of the regional and urban population to have access to social schemes and exercise their rights.