Photo Story of the month 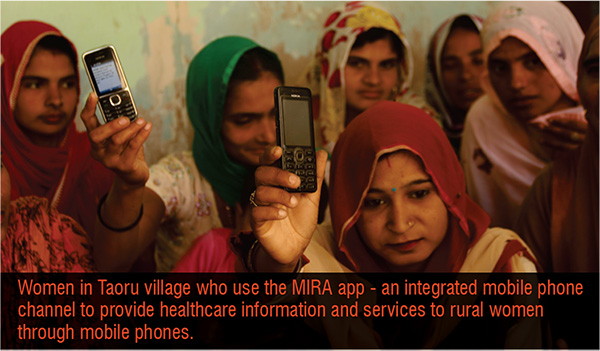 Every year Digital Empowerment Foundation conducts Mobile for Good Award in collaboration with Vodafone India. Last year ZMQ nominated their project ‘MIRA’ for the award. The project was selected as one of the four best mobile practices of the year and was offered INR 1 million funds and mentorship support for next two years. DEF’s team visited Mewat on two occasions to monitor the progress as well as make a short film on the usage and impact of the application.

The first visit was to a village called Tauru. Most of the beneficiaries were young mothers who were using the application for the first time. Many women in the village did not have access to mobile phones but with the help of MIRA workers, after registering with them, all were given a handset that provided them with step by step guidelines on getting through the pregnancy. One of the key features of this program is that the ASHA workers and ANMs visit the registered women on a regular basis to check that they do not have any medical complications during their pregnancy and that all women have safe deliveries.
This particular village had a majority of Muslim minorities. The social set up there did not allow women to step out of the house or even go to the hospital for regular checkups or during pregnancy deliveries. Introducing MIRA to the women in this village helped them to gain substantial amount of information on healthcare and pregnancy related queries as well as have access to health checkups and contact person at times of emergency. The DEF team could not film the case study as most of the women were not comfortable speaking or being shown in front of the camera. The visit highlighted the social setup that is still prevalent in this small village and the need for ICT tools and Mobile applications to empower women, who are unable to fight or go against such set ups.

On 2nd may, the team from DEF went to another village in Mewat called ‘Rangala’. Unlike the previous visit where the team could not freely interact with the women, in this village the Mira beneficiaries were a lot more open and comfortable speaking in front of the camera. Our first stop was the house of a MIRA beneficiary – Sarita. A young 28 year old who had recently got herself registered to use the MIRA app. Sarita, along with a few more recent beneficiaries sat down to have a discussion about the benefits of using the MIRA app. Most of the women in the past had numerous pregnancy related complications, including unhygienic means of deliveries, abortions, lack of information on vaccination, immunization etc. Eight out of the ten first born in the village had not been given any immunization at the time of birth.  Currently all of those children were suffering from some disease or the other. Another problem that the local women faced was that local facilities such as hospitals, emergency contacts or even transport were extremely unreachable for these women. Unlike Taoru village, where women had numerous social constraints that didn’t allow them to step out of the house or go to a nearby hospital, the women in Rangala had none of those, yet they suffered as much as the women from other social setups.

Bhagwani, a 70 year old from the same village, shared her story with the rest of the women present there. After giving birth to nine children and having four abortions, her view towards the mobile phone app was slightly cynical as compared to the rest of the young women. She shared some traumatic experiences of how she had given birth to her children in middle of jungles and fields with no help or medicines. Her stories only highlighted the circumstances and the hardships women had faced towards healthcare and the lack of facilities in such rural villages in India. According to Bhagwani, women had to become strong and resilient towards circumstances as very little attention was paid towards healthcare and livelihood. It was interesting to note that towards the end of the discussion, Bhagwani herself said that she would not want any of her daughters or daughter-in-law to suffer or go through the hardships she had gone in her days. And if the mobile app promised to deliver and keep up with the promise of helping women in that village then it would be a good thing to adapt to.