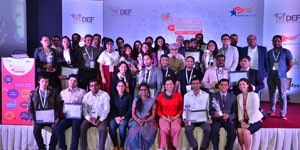 The Social Media awards has started serving since last year as a dedicated platform to explore the latent potential of ICTs tools and honor the best initiatives that have successfully brought about positive social change and/or socio-economic development and/or empowerment of women and other marginalized communities by using the power of social media.

This year’s award held on 20th November 2014 at Eros Hotel, New Delhi followed by a productive round table discussion between the winners and social media experts of the year on the 21st November at American Center, New Delhi. The event was graced by the presence of dignitaries from various countries across South Asia.

The event was kick-started by Mr. Osama Manzar, Founder and Director of Digital Empowerment Foundation who talked about the idea behind this Award. Mr. Gautam Chikermane, who is the New Media Director of the Reliance Industries limited opened the session with his key note. He focused on the disruption triggered by the use of new technologies & new communication mediums such as Social Media and how it has affected the life of a common people and the governance and policy making of a country.

The awards gala was kicked off by a powerful keynote by Gul Panag who is a well known Actor, producer, political activist, Fitness enthusiast and Adventurist. She discussed the role of Social Media for women empowerment and Social Media as strong tool for communication and Advocacy. Her key note was backed by global statistics about the influence of Social Media.

This year we received a total of 161 nominations out of which 129 nominations qualified as valid nomination. 98 nominations cleared the first screening out of which 66 were chosen by the virtual jury to finally compete for the awards. Grand jury finally picked 32 finalists out of which 16 winners and 7 special mentions were selected. The jury also selected the most innovative entry of the year out of the total finalists.