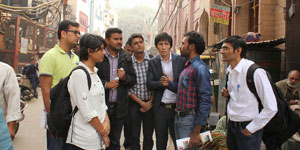 DEF organized an e-heritage walk in the ‘Walled city Shahjahanabad’, famous as Old Delhi,for the winners of ‘Social Media for Empowerment Award’.

Shahjahanabad was built by the fifth Mughal Emperor, Emperor Shahjahan, in 1639 CE.
Hence, Old Delhi is a wealth of history, culture, tradition, food, architecture, tales, customs and lifestyles. And to document this invaluable treasure trove into a website in order to amplify its accessibility, DEF and the cultural wing of UNESCO have partneredfor aproject called e-heritage.

The winners have gathered to begin the walk at Turkaman Gate, which is one of the fourteen gates that leads into Old Delhi. The excitement in their faces is palpable.

We are also taking this opportunity to test our M-heritage App. The participants are introduced to Mohammad Arif as their guide for the walk, who is a Senior Research Fellow with e-heritage project.

The walk begins.
Entering the narrow street of Old Delhi is like entering a wormhole. In an instant it seems we have gone back in time.
It is an overwhelming experience. One negotiates people constantly brushing past, three-wheeler cycle rickshaws appearing from nowhere, hawkers, school-children, men in and out of mosques et al. The participants are constantly taking pictures. Each time-worn house, structure, exquisitely carved persian doors and windows of Mughal era that waylays, has a story to tell.
Ten minutes into the walk we reach a beautiful green mosque marked by a steep line-up of stairs. It is Kalan Mosque.

Kalan Mosque was built during the reign of Emperor Feroze Shah by Wajeere-Azam Khan Jehan in 28th June, 1387 CE. The participants are transfixed by its architectural splendour.

Moving ahead, we enter another narrow lane. The lanes are the lifeline Old Delhi running through and across like veins. Once you get sucked into this labyrinth, you discover life in its most uninhibited form.

We are heading towards Pahadi Imli, which the highest point of Old Delhi. We ascend by steep slopes, and climb stairs which are gradually but surely taking us up, unsuspectingly intervened by an odd goat tethered next to a door.

And soon we are standing on the roof of the house that has the highest and the most priceless view of the walled city. The expanse of the area from this perspective is unimaginable with the grand presence of Jama Masjid looming over all other structures far and wide.

Another interesting view we become witness to is many groups of pigeons jetting across the sky. Every now and then two groups fly through each other guided fervently by their human masters, who are restlessly jumping on their roofs making strange noises. Arif tells us that it’s called Pigeon-fighting.

Pigeon-fighting is a traditional sport that has found its course from the times of Mughal Empire, when Emperors indulged in it in their leisure time. It’s still practised on a competitive level in Old Delhi.

We descend down from the roof and a few steps later into the narrow lane come across a library nestled modestly into a corner. It’s Hazrat Shah Waliullah library, named after Shah Waliullah who was an Islamic scholar, reformer and founder of modern Islamic thought in the 17th century. The library has the collection of some of the rarest urdu literature in India.

By the time we leave the library, we are sufficiently enriched and spellbound.

There couldn’t have been a better and grander finale to our walk than to conclude it at the biggest and the most iconic mosque in India, Jama Masjid, built by Emperor Shah Jahan in 1656 BC.

Our e-heritage walk may have come to an end, but apparently, our stay hasn’t.

We are served some of the most sumptuous cuisines that Old Delhi has to offer at the house of Seema Tahira, who comes from a lineage of one of the oldest families in Old Delhi, and is currently Councilor of MCD in the area. But more than the food it is the love and affection with which our hosts welcomed us, and won us over.

This should be the most enriching one hour of our life.