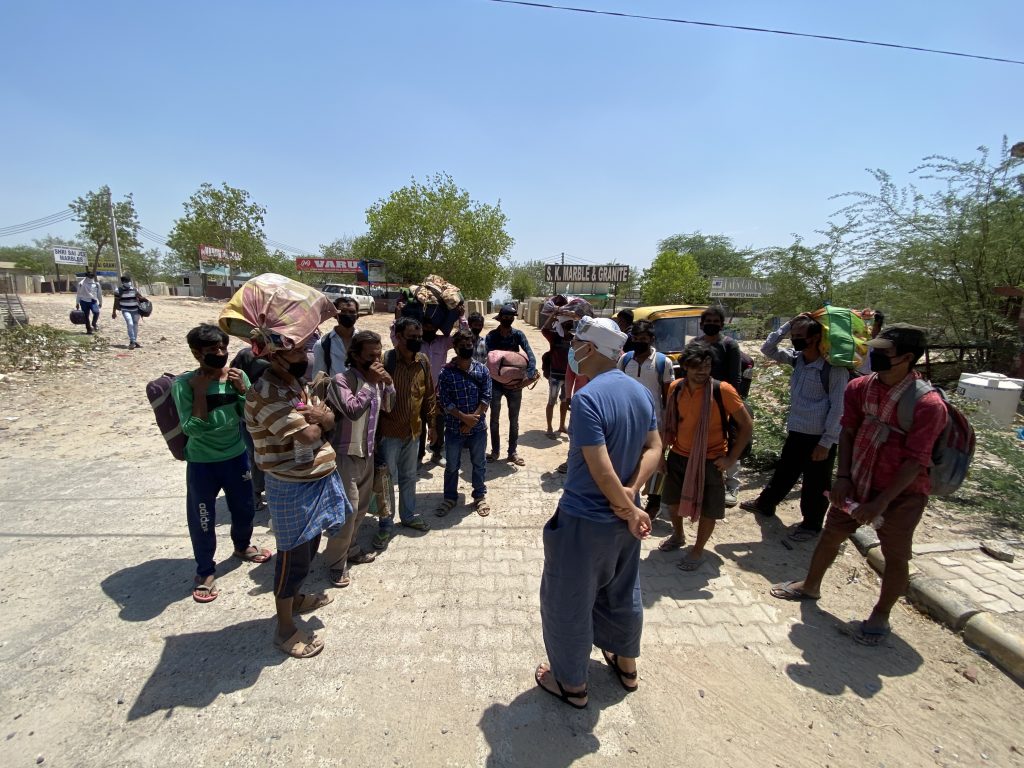 “Ab hamein ghar jana hai, hum bohot ruk liye” (We want to go back home now. We have waited long enough), said Bharat Yadav, who was one of the many migrant workers walking back home because of no work and desperation. We met them on the way to Nuh, Haryana, a small town just 80 kilometers from Delhi.

Digital Empowerment Foundation’s team in Nuh works closely with the community through the Community Information Resource Center to cater to the various digital needs. In the time of Covid-19, they have been producing masks which we went to collect to distribute to those in need in Delhi. The DEF Nuh team gave the order to make masks to a local family to help them generate some income in this health crisis. It was on the way that we met the migrant workers who were taking this nearly impossible journey to reach home- some on cycles, rickshaws and others on foot. The Nuh team has been camping at the KMP Expressway where most of the migrants are passing through to go back home, to provide them with relief kits which includes masks, soaps, milk, Glucon-D, biscuits and a water bottle along with cooked food to help them sustain through their journey.

Couldn’t Find a Bus to Bihar

We drove down the Mehrauli-Gurgaon road, one of the roads that connects Delhi with its twin city of Gurgaon. On the way we saw two young boys walking on the road with heavy bags on their backs. We stopped the car to give them masks and soaps. Upon asking them  from where they were walking, Sandeep and Lal Bahadur said “Hum Kashmiri Gate Bus Stand se wapas aa rahe hain, hum teen din pehle wahan gaye thhe bus se Bettiah jaane ke liye lekin bus nahi mili. To ab hum wapas Gurgaon ja rahe hain, hamare saab hamein shayad kaam aur paise denge” (We are coming back from Kashmiri Gate Bus Stand. We had gone their three days back in the hope of finding a bus to go back to Bettiah in Bihar, but we couldn’t find a bus so we’re going back to Gurgaon to our employer who will hopefully give us some work and pay us). 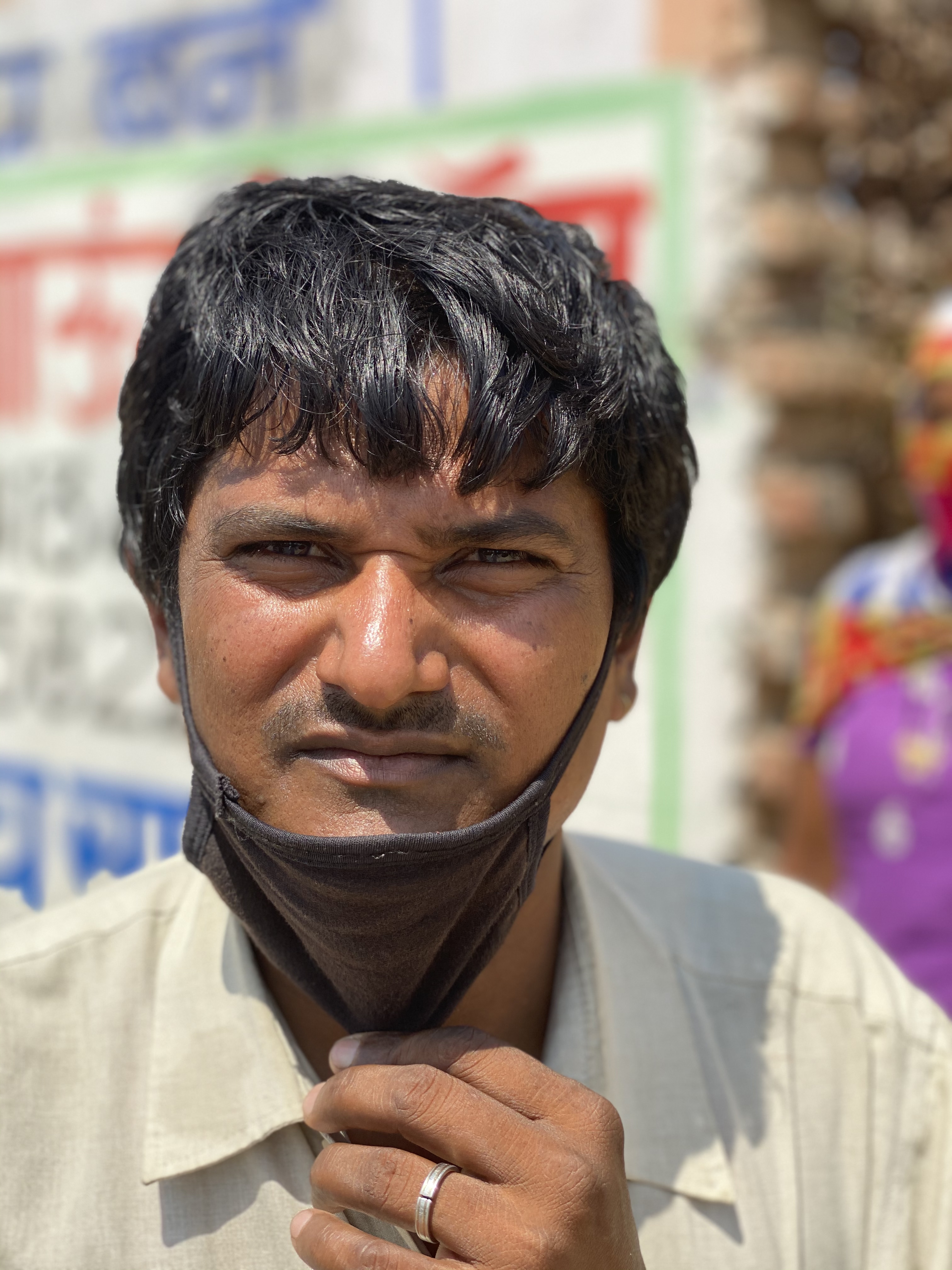 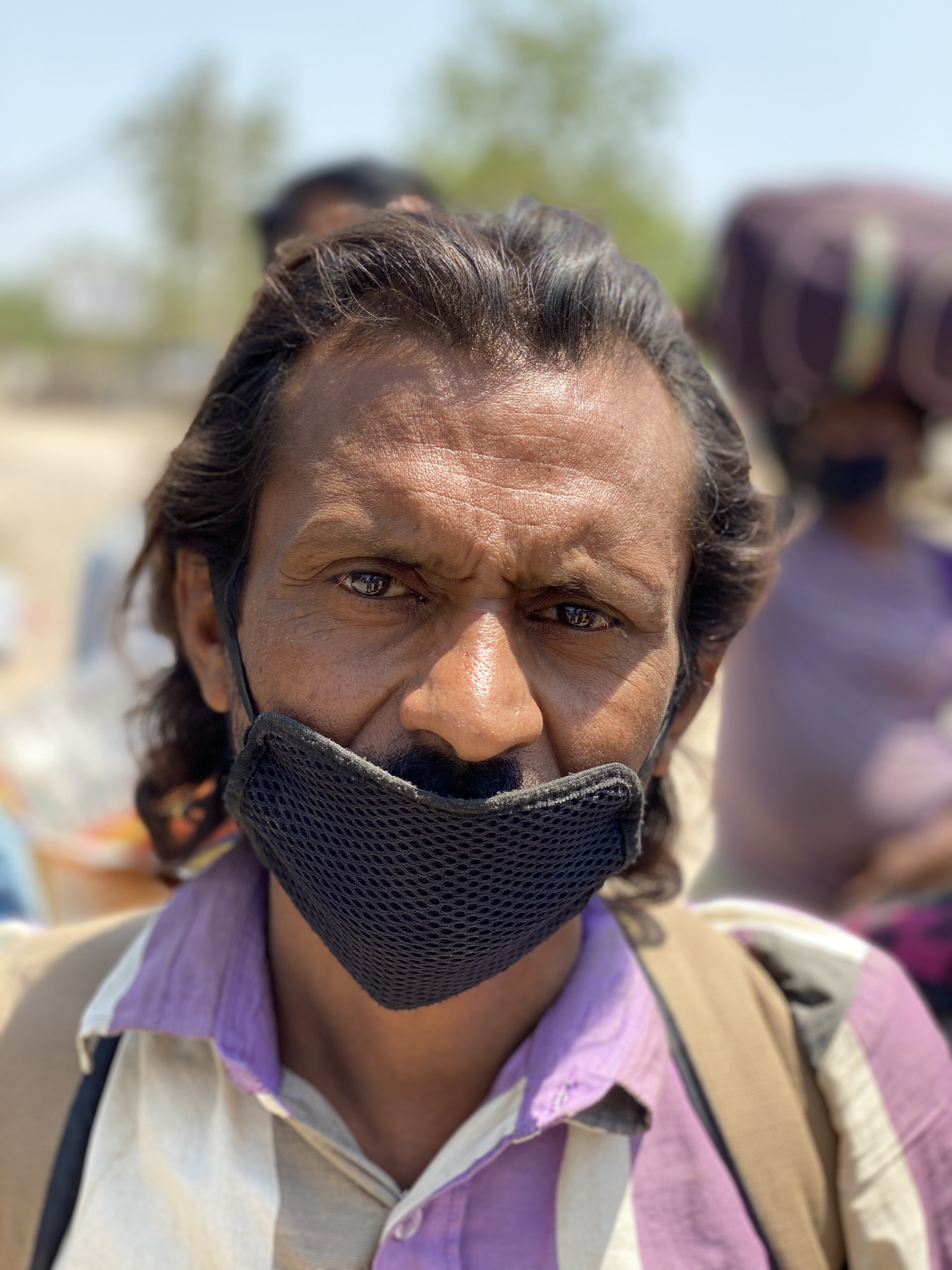 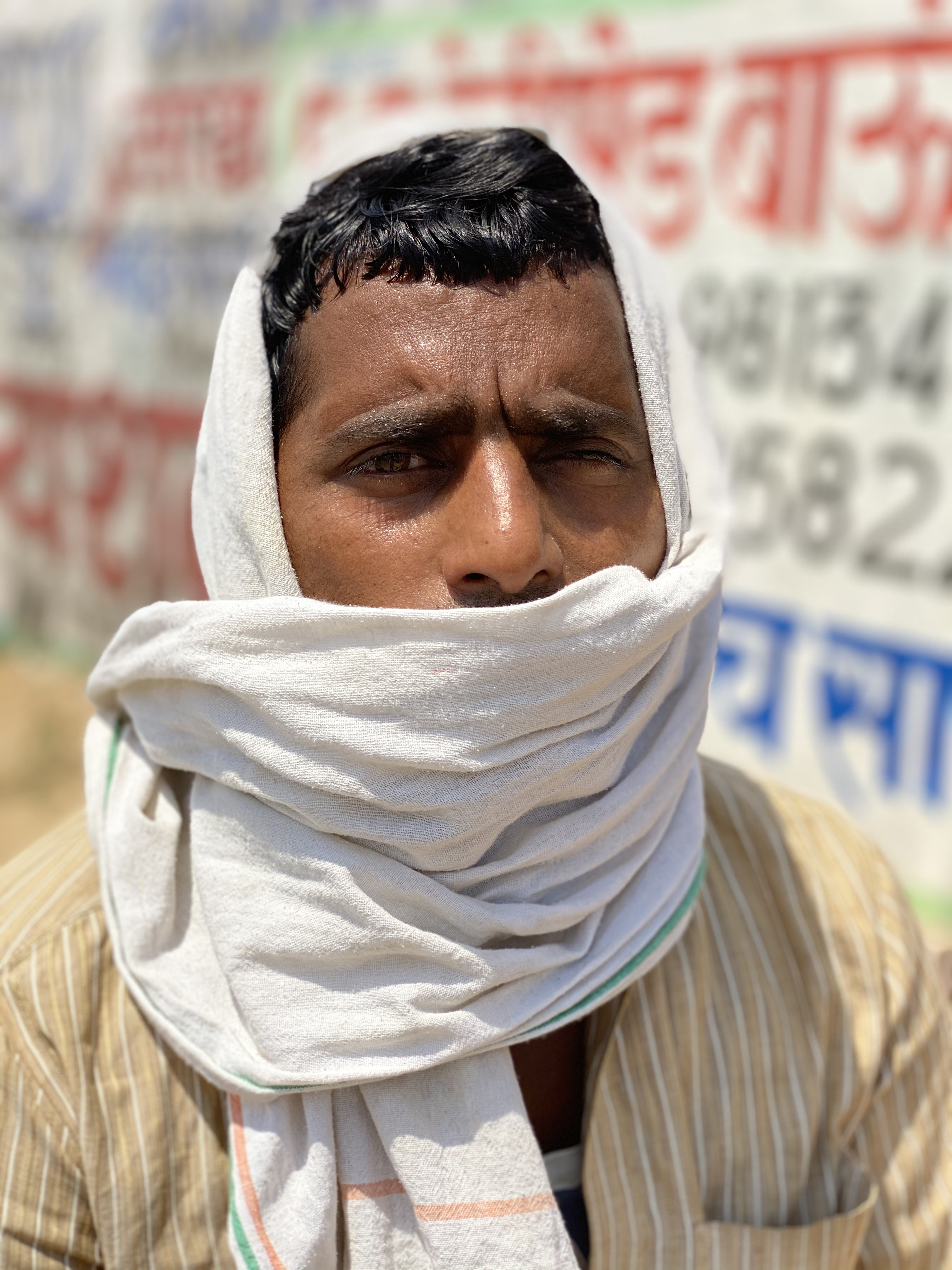 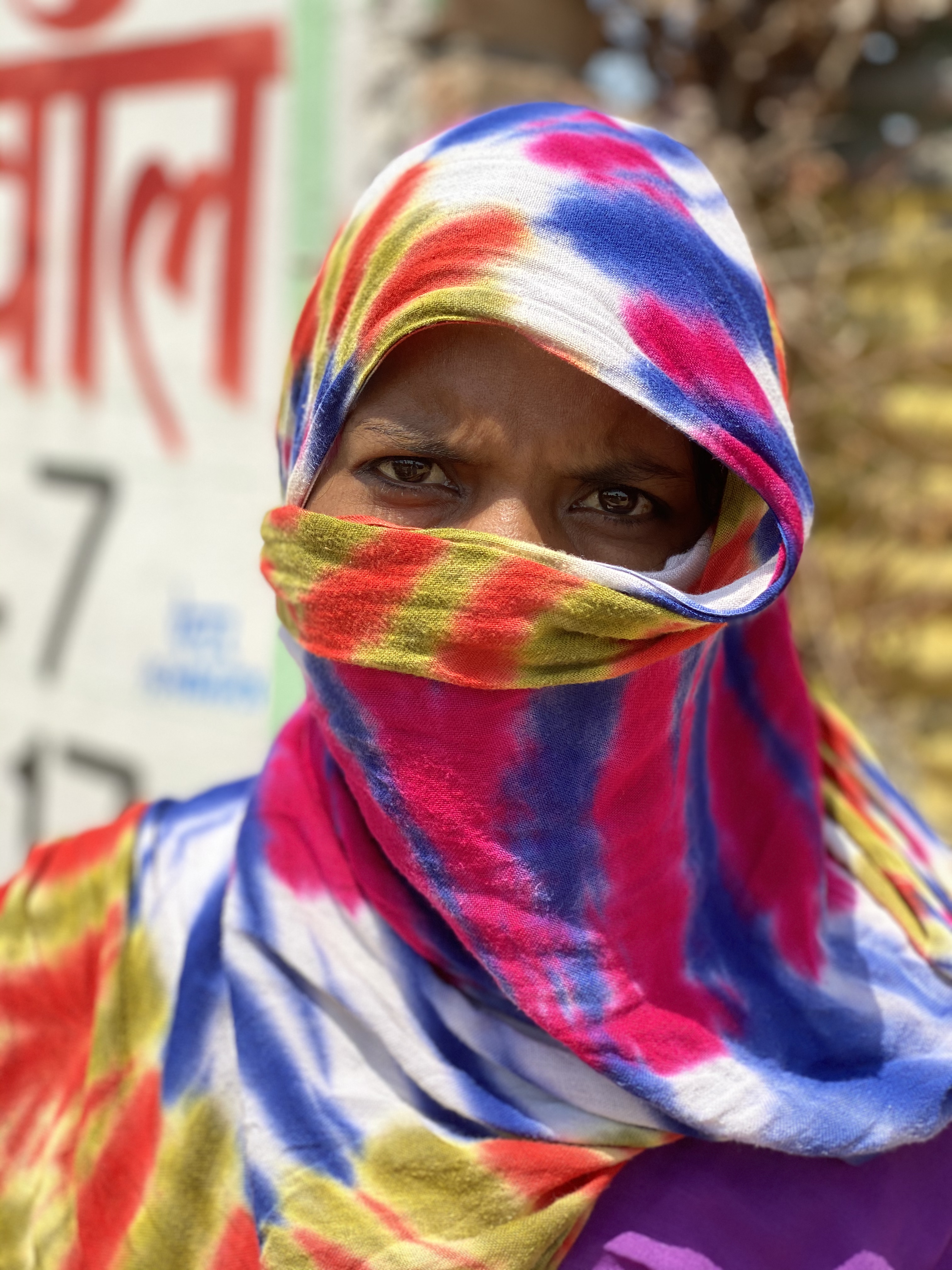 Gurgaon to Kashmiri Gate is a long walk, almost 50 km and Sandeep and Lal Bahadur walked all the way to go back home. Their disappointment was clearly visible. We asked them why they wanted to go home when there was a hope that work would start again. They said “Ab hamein apne parivaar ke saath rehna hai, bohot intezaar kar liya. Hum gaon mein kuchh kaam dhoond lenge, yahaan nahi reh sakte” (We want to live with our families and we have waited long enough. We will find a more stable job in our village, we can’t live here anymore).

Not Allowed to Cross the State Border

A group of about 25 people, all with bags, were walking on the side of the road. These people were from Malda in West Bengal and they had been told that there is a bus service that goes to West Bengal and will leave from the Badarpur Border in Delhi. They have been working in Gurgaon as construction workers and while many people started to leave when the lockdown was announced, they decided to stay back in the hope that the situation would get better. But without any stable income and food security they all decided that going back home would be a better option.  “Hum log bohot din se intezaar kar rahe hain lekin kal humne soch liya, hamein ab bas ghar jana hai. Hum dekhenge kaise jaayenge lekin jaayenge zaroor,”they said. (we have been waiting for a long time but yesterday we decided, we want to go back home. We will figure out how to but we have to go back home now, we can’t stay here any longer). But unfortunately, when they reached the Delhi-Haryana border to enter Delhi they were not allowed to go past the police barricades.

We asked them about their economic situation and they said “thhoda-moda paisa hai zyada nahi. Pehle koi khana de deta thha aur makaan maalik ne bhi nahi nikala thha lekin phir jo khana de rahe thhe unhone kaha ki ab nahi de paayenge aur makaan maalik ne bhi nikal diya jab usne dekha ki hum paisa nahi de paayenge” (we don’t have a lot of money. Someone used to provide food for the first few days of the lockdown and our landlords also didn’t kick us out even though we didn’t pay rent. But then the supply of food stopped as the people who were giving us the food said they couldn’t afford it anymore and our landlords also kicked us out when they realized that we wouldn’t be able to pay them).

We gave them all masks, soaps and also some financial assistance to help them take on this journey. We also asked them to verify information before believing it. So instead of walking all the way to the Badarpur Border and finding out that there is no bus, they should make sure that the information is true. We also suggested some routes to that bus stand.

We spotted a family of five who were all going on a rickshaw with some luggage on the Sohna Road. Jagdish and Kamlesh have two kids Sonu, 12 and Mansi, 9, and they were travelling with Jagdish’s brother-in-law Kalla Ram. The three adults were taking turns riding the rickshaw. Jagdish said “hum apne gaon wapas ja rahe hain, Alwar ke paas, Dilli se 200 kilometer dur. Kal raat hum Uttam Nagar se nikle lekin police ne border cross nahi karne diya toh humne gaon ke raaste se jaane ki koshish ki lekin woh wapas usi checkpost par aa gaya. Lekin iss baar police wale alag thhe, who hamari baat samjhe aur hamein jaane diya” (We are going to our village near Alwar. It’s almost 200 kilometers from Delhi. We left from Uttam Nagar in Delhi yesterday but the police didn’t let us cross the border so we turned back and went through some villages hoping we would be able to cross the border internally but all those roads led back to the same checkpost. This time however there were a different set of policemen as the shifts had changed. They were more sympathetic to our situation and allowed us to go through). They have been moving day and night with occasional halts to rest and eat but were desperate to reach home soon. They said “hum log chal hi rahe hain, thhodi der ke liye sone ke liye ruke thhe lekin machharon ki wajah se neend hi nahi aayi. Aaj raat Sohna ya Nuh mein rukenge aur kal Alwar pauhaunch jaayenge” (We have been moving non-stop. We stopped to sleep a little but there were too many mosquitoes so we didn’t get any sleep. Maybe we will spend the night in Sohna or Nuh and then reach Alwar tomorrow). Upon hearing this, we immediately connected them with our Nuh team who will be willing to host them and provide food and essential items.

“Hamein ab ghar jana hai, hum bohot ruk liye,” said Bharat Yadav (We want to go back home now. We have waited long enough). We asked them why they weren’t availing the train service that the government had recently restarted. They said “hum itni mehengi ticket nahi khareed sakte, hum cycle se Gaya chale jaayenge. Zyada din lagenge, shayad ek hafta lekin hum pauhaunch jaayenge, pakka pauhaunch jaayenge” (We can’t afford such expensive tickets. We will just cycle back to Gaya. It’ll take longer, maybe a week but we’ll get there. We are sure of it) said Yadav, a father of two kids. We met him, his family and a few friends on the Sohna Road in Haryana. All of them are originally from Gaya, Bihar, they were working as construction workers in Gurgaon for the past few years. Even though they just had a few biscuits and water bottles with them but their spirits were high. One of them said “kal raat ko hum ek showroom ke bahar ruke aur watchman ne hamein andar bula liya. Usne hamein pani diya aur wahan aaram karne diya” (Last night we stopped outside a showroom to sleep and the watchman saw us there and welcomed us inside. He even gave us water and let us take rest in the building). When asked  how will they know which way to take,one of them immediately opened Google Maps and showed me, “sir yeh raha raasta. Jab bhi hum confuse hote hain, isko khol lete hain” (Sir this is the way. Wherever we are confused we will open this and check). He had also installed an app that charges the phone using solar energy as they wouldn’t be able to find charging points along the way. 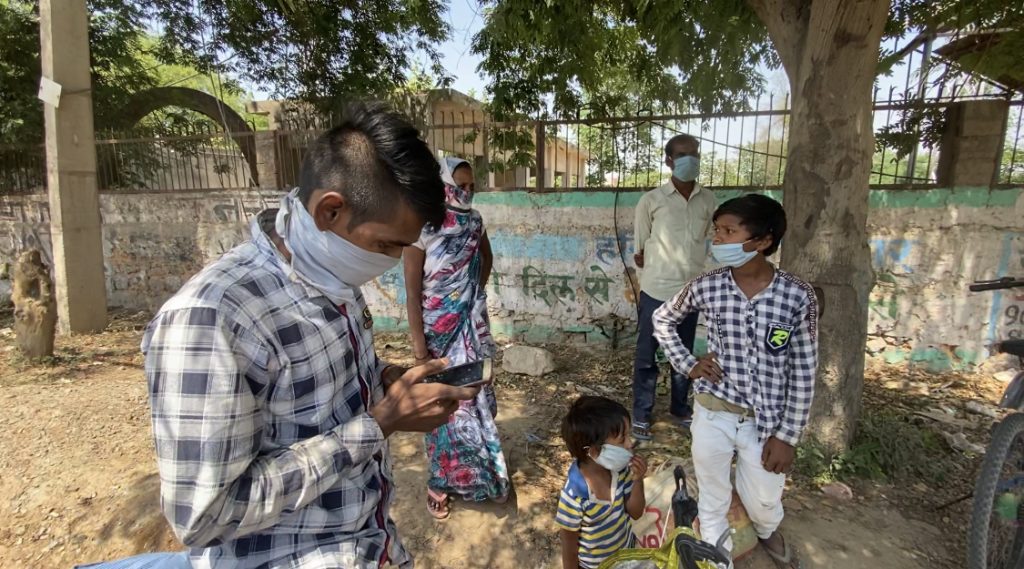 Gaya is by no standards a short distance from Gurgaon. It’s nearly 1,100 kilometers away but these migrants were sure of completing the journey, all they wanted was to go back home, nothing else mattered to them. We exchanged numbers with them and have been in constant touch ever since. Despite not being formally educated, they have been sending us voice notes, updating us on their journey. He told us that a kind truck driver gave them a lift for 100 kilometers, however in his latest update he said that the police are not letting them go past Agra so they are trying to figure out how to move ahead.

Migrants have been the backbone of our industries and thus our economy. We have been dependent on them as much as they have been dependent on us. When the time came when they needed our help, their landlords kicked them out and their employers refused to pay them for the work that they had done. This left them vulnerable to not only the virus but also hunger and other hardships. Even after being bruised and damaged their spirits are still high as they make an attempt to go back home. They have decided, this city doesn’t have a place for them and so they are going and they are not going to come back.

Over 50 days into the lockdown in India, the migrant workers are still on the roads walking day and night to reach home one way or another. Lack of employment has left them high and dry with little to no support by the authorities in this crisis. Although the pandemic has adversely affected the socio-economic fabric of the countries around the globe, it has also showed us a mirror as to where we stand for the vulnerable and marginalized who actually form the backbone of any country.