Long road to Smartpur could be made much shorter

You are here:
September 1, 2018Leave a commentBlogsBy Udita Chaturvedi 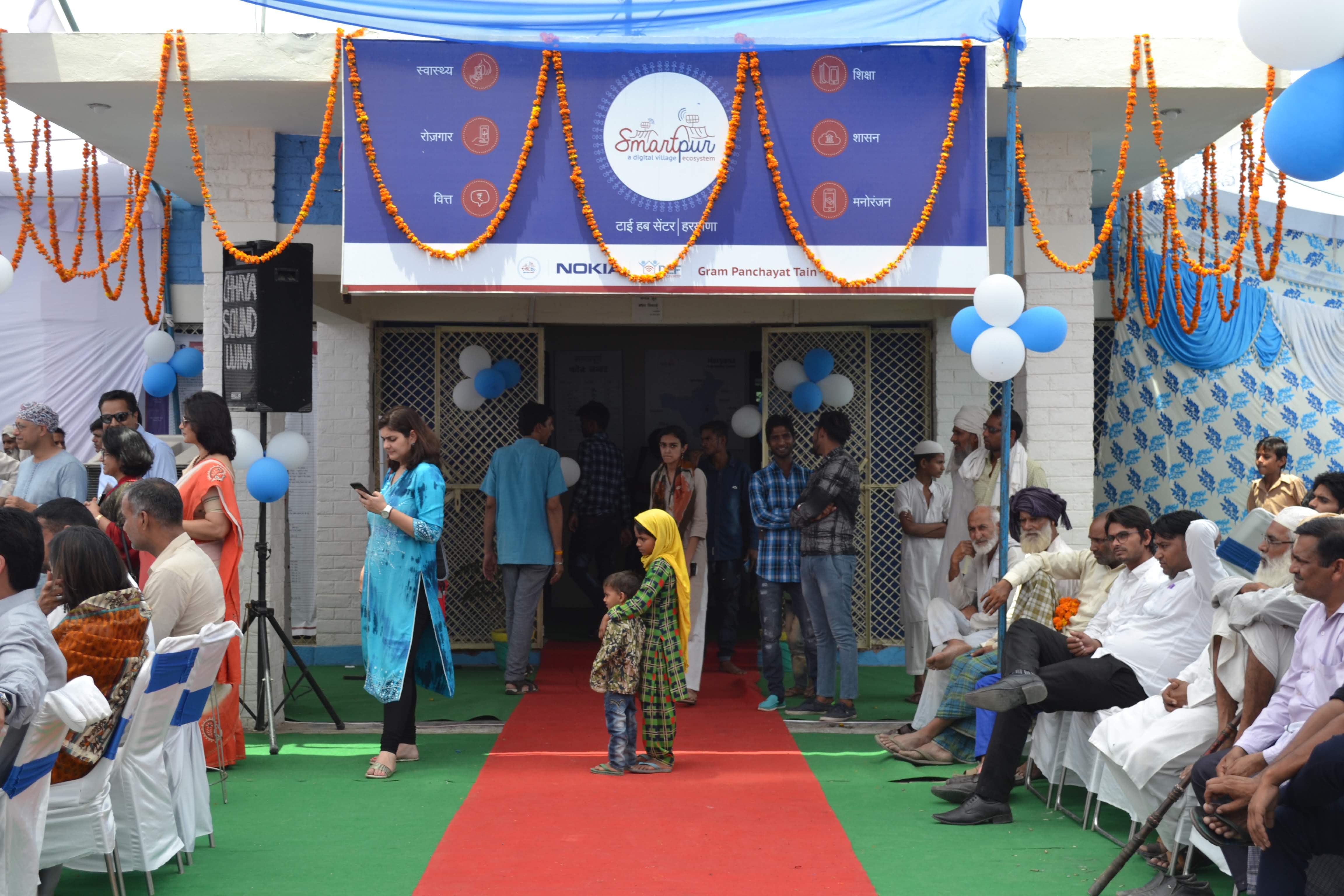 This article was first published in the Civil Society magazine in September-October 2018.

People often ask us why we at the Digital Empowerment Foundation (DEF) are trying to impart digital literacy or create wi-fi hubs in villages when poor people need food, shelter and clothing.

The answer is very clear. Internet is not the end goal for us. It is merely a means to achieve the end goal. Allow us to illustrate. For a simple photocopy, we urban dwellers will find a service a few steps from our homes at Rs 1 per page. A poor person living in a remote village will, however, pay `240 for one page. If that surprises you, let us explain.

Imagine there is a man named Shivam who lives in a remote village in Rajasthan. He wants to apply for a government scheme. But he has to submit a copy of his government ID to avail of the scheme. To travel to the nearest village or town that has a photocopying service, Shivam will have to skip a day’s work and forego his wages of `200. He will also need to pay about `0 for a two-way ride to reach this village or town. Given the low demand for photocopying services and the high cost of the machine, the shopkeeper, in all likelihood, will charge him between `5 to `10 per page.

Digital tools and technology are critical for our marginalised communities. Today, all government schemes are available online and require an Internet connection for people to be able to apply.

And the onus of making this basic infrastructure available to the masses lies with the government.
It is the government alone that has the resources to implement an initiative that can envelope the entire country.

India is a country of great paradoxes. This nation has contributed 101 Indians to the Forbes list of the world’s billionaires. But more than 260 million Indians live below the poverty line. Officially, India has a literacy rate of 74.07 percent. But about 50 percent of Class 5 students cannot read texts meant for junior classes. Facebook has the highest number of users in India at over 240 million. But only 30 percent of Indians have access to the Internet. India is a country where one billion SIM cards are in use, yet, ironically, 72 percent of women don’t have access to mobile phones.

In the past 71 years, subsequent governments have launched plans, policies, schemes and programmes to develop India and its people. There have been efforts in sectors like health, education, governance, finance and livelihood. Alongside, efforts have been made to provide access to digital infrastructure, most recently through the ambitious Digital India plan.

However, India is not known for effectively implementing its plans, policies, schemes and programmes. It is often hampered by population, geography, efficiency, corruption, information dissemination, budget allocation and other factors.

These challenges are being faced by the National Digital Literacy Mission (NDLM) and the National Optic Fibre Network (NOFN) or BharatNet. The two government-driven programmes are the foundation  of the Digital India vision, and so their importance and the need to ensure their effective and efficient roll-out can’t be stressed enough.

More and more services and opportunities, both public and private, are going online and getting an impetus with the push for a Digital India. It is, therefore, imperative that people have access to digital tools and technologies, know how to use them and are able to leverage the opportunities that the Internet holds for everyone.

The mission of the government-driven NDLM is to provide digital literacy to every Indian. To promote the adoption of Digital India, the government revamped the NDLM in 2016 when it raised its goal to reaching 60 million individuals. Implementing partners began working day and night to meet this target but they did not all share the government’s vision.

While the intention of the NDLM and the plan to scale up is correct, its approach isn’t. Had the government taken an institutional approach to digital literacy rather than randomly training any 60 million individuals in rural India, the outcomes would have had greater impact and created a ripple effect.

To get a perspective, imagine these scenarios. Had the government trained teachers in digital literacy across India’s 1.4 million government schools, the teachers, in turn, would have been
able to train 227 million students and build digital capacities.

An institutionally targeted approach would have helped make our government officials, representatives, schoolteachers, frontline health workers, civil society representatives, the farming community and other institutional members digitally literate. They could then have used this knowledge to bring in efficiency and transparency in the public service delivery system and, at the same time, shared their knowledge with others. This would not only have created a pool of digitally literate individuals and institutions but also incentivised the penetration and adoption of digital tools and technology, thus creating a cascading effect.

Given India’s economic demographics, large population and vast geographies, there is dire need for low-cost, democratised and decentralised Internet connectivity. While the cost of mobile phones has come down significantly over the years, a large population still can’t afford a feature phone, let alone a smartphone. Then there is the additional cost of an Internet connection. While Reliance Jio has changed that scenario considerably, there are still thousands of villages that lie in the dark regions of the telecom ecosystem.

A special purpose vehicle, Bharat Broadband Network Limited (BBNL), was set up to implement and coordinate the project. This connectivity would have enabled timely, relevant and affordable access to welfare schemes and public information, which would have empowered and helped marginalised communities to develop.

BharatNet was originally supposed to meet its target for Phase I in 2014. It was extended to 2016. Since then, India has missed several deadlines, NOFN has earned a new name and millions of taxpayers’ money has not been made accountable.

At the end of last year, the government finally declared completion of Phase I of BharatNet, making optic fibre cable allegedly available to 100,000 panchayats. However, when DEF’s  research team did a spot check of 269 of these gram panchayats across 13 states, the results were disappointing. Only 18.6 percent (50 locations) of the 269 gram panchayats had BBNL devices installed and 11.5 percent (31 locations) had a ‘functional but slow’ Internet connection.

This clearly meant that optic fibre cable has been laid, devices have been installed, and laptops have been allotted, but the critical task of actually making Internet connectivity available, functional and distributed has not been accomplished in thousands of panchayats.

Connecting all 250,000 panchayats across India’s vast geography was never going to be an easy task. But if the government wants to force digital payments and digital identification in exchange for entitlements and public services to the most marginalised communities, providing functional Internet connectivity and the required tools to access it should have been a bare minimum requirement.

The two foundational pillars of Digital India —NDLM and NOFN — can transform India and pull millions of people out of information poverty and enable them to empower their own lives.

If government schoolteachers are trained in digital literacy across 1.4 million government schools and if these schools are provided broadband Internet, both teachers and students will be able to use digital tools and technologies for teaching and learning. They could even leverage technology to improve accountability and efficiency of school administration and management.

If the government takes digital literacy to all village council members across 250,000 gram panchayats and provides them with functional Internet connectivity, they would be able to have a comprehensive presence online. They could upload details of their annual allocated budget, expenditure, progress on rural development projects and even a repository of village information and updates.

If the government empowers 860,000 ASHA workers and 1.8 million anganwadi workers with digital literacy and digital tools, they will be able to leverage their skills and devices to improve health standards in their communities.

Realising this gap and learning from our 15 years of experience, DEF launched a project named Smartpur earlier this year under a Nokia CSR collaboration. The premise of Smartpur rests on the fact that mere availability of digital infrastructure is not enough. Rather, it is the efficient integration of technology in the daily lives of people that creates a smart and self-sustainable village.

The vision of Smartpur rests on the success of six development areas — education, health, governance, livelihood, finance and entertainment — that are powered by wireless Internet broadband connectivity.

India has leapfrogged digitally. It has made most of its services digitally enabled, forced Aadhaar-enabled identities, and pushed financial services through digital technology. So, it is only just and fair to concentrate all our efforts at digitally enabling the remaining 70 percent of our unconnected population that lives in rural India.

Related posts
In the age of social media, the credibility of content is an important issue
May 17, 2019
What will it take to bring India’s children online
November 15, 2018
What’s the way forward?
July 20, 2018
India’s ‘let’s ban it’ approach to anything that makes it uncomfortable online is a violation of human rights
April 30, 2018
With the worst 4G speed in the world, is India just chasing headlines on digital economy?
February 23, 2018
Right to Privacy: What do the limitations mean and how will they impact you?
August 25, 2017