‘Individual Rights & Social Media’ leaves a lot to think about 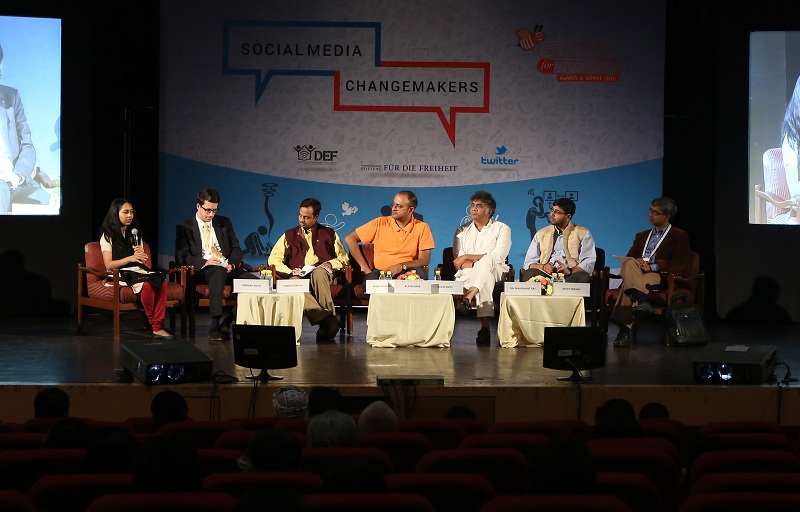 DEF and Friedrich Naumann Foundation (FNF) organised a 90-minute panel discussion that brought together some pre-eminent thinkers and academics of the individual’s rights in the digital medium, specifically on the topics of access, openness, security, privacy, policy, regulation and ethics.

Various perspectives were elicited from the panelists and audience who, together, made the discussion a lively one.

Section 66A and the restriction on freedom of speech and expression online was discussed at length by the panel. Arun spoke about the method of gatekeeping which is restricting what netizens should see online, briefly reminding the audience of the recent battle against net neutrality.

“A lot of governments like violating our rights. And so, we should not leave our rights to the governments. Section 66A is a great example because the people of India forced the government to take down the law,” she said.

Patel further elaborated on how the laws, many of which the government inherited from colonialism, in the Constitution represent that the leaders don’t trust its citizen. Additionally, there are several areas where laws don’t exist or are not adequate.

Pushkar agreed, and added that the state does not allow all the necessary information to be shared with its citizens due to its colonial nature. This is where social media can play a big role, and it is. Probably a new regime of regulations and a new look at individual liberties should be brought in at the earliest.

Talking about individual liberties, the whole debate about caste in India leaves a European flabbergasted, said Dieckhoff. We don’t understand the discrimination. So yeah, it is very challenging to ensure individual rights offline, but efforts can begin to be made online at least.

This also brought the panel to think over topics of national and personal security. “While the governments are trying to restrict information online to avoid terrorism, there are a lot of information sources available for security forces today that were never available before. Think of all the unencrypted smartphones they can tap into in the name of national security,” he said. “If you send a letter by post from A to B, there is a chance that nobody will intercept it or read it. But if you send an email from A to B, it’s almost like sending a postcard,” he added.

When the floor was opened to the audience for questions, one of the first few questions was about the nature of democracy if two teens are arrested for publishing a Facebook post critical of a bandh in Mumbai after the death of a political leader.

“The restriction of speech is being imposed in the name of economic growth and nationalism. But am optimist that this won’t go on for too long as there’s not going to be any GDP growth, and I’m saying this in the capacity of an economist. And this enforced nationalism is giving rise to rebellions within universities. India’s first Prime Minister Jawaharlal Nehru said India should grow keeping in mind the class and not the caste but the structure of the society is still divided,” answered Prasad, adding that we harbour on the illusion of anonymity. “We are as much at danger from Internet companies and big corporation as we are from the government.”

The panelists reminded members in the audience that almost nothing is “secure” online, and the government does not have the best laws to protect the freedom of expression of its citizens. From calls and text messages to our posts on social media, all are under the lens of somebody or the other.

We hope the summit left the audience with a lot to ponder over.