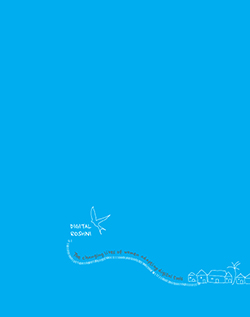 Since March 8 is International Women’s Day, it is only appropriate that we celebrate women throughout the month. We at Digital Empowerment Foundation (DEF) decided to celebrate the annual occasion by sharing stories of women achievers and believers from across our 150 regional centers in the country.

This year’s theme for the International Women’s Day was Planet 50-50 by 2030: Step it up for Gender Equality. In line with that, we decided to reflect upon how we as an organisation have helped individuals, societies and communities to move towards gender parity in whatever way — big or small.

Our introspection resulted in a book titled Digital Roshini. The illustrated book put the spotlight on stories of 25 women who shared how their lives and perceptions have changed since DEF’s digital intervention. What they also share, which has been beautifully shown through this book illustrated by DEF team member Cathy Pin-Chen Chun, is how they will raise their daughters, and it will be different from the way they were raised. It was revealing how their approaches have changed dramatically.

The book was launched during a daylong social media campaign to discuss the impact digital inclusion can have on women. As part of the campaign, we launched a short video with the message — women will rise despite their struggles.

Over 1.7 billion females do not own a mobile phone in low and middle-income countries, according a report by Connected Women. It states that women in Asia are 38% less likely to own a mobile phone than men. This is a huge gap that must be filled at the earliest.

Brigham Young, one of the founders of the Mormon community in the US, once said, “You educate a man, you educate a man. You educate a woman, you educate a generation.” Never was a sentiment more truly expressed. By nature, men have a tendency to learn something and keep it to themselves. On the other hand, when women learn something, they like to share it with their friends, children and even talk about it to their husbands, thereby sharing the information with multiple others. Unfortunately, women are the last in a family to receive a mobile phone. It’s always the husband or the man of the house who is the first one to get a device, followed by children. In fact, in thousands of rural households, women share phones that their children or husbands use. Imagine if each woman is digitally included and given a personal mobile phone; the extent of changes she will usher into her family and community will be nothing short of revolutionary.

During the course of the day we shared several videos from our centers with women as part of the Selfie: Women’s Day 2016 campaign. Through these videos, participants shared what it meant to be a woman in this world, and how digital literacy has changed their lives.

Later in the day, DEF initiated a tweetathon where Twitter users were encouraged to discuss the impact of digital inclusion for women’s empowerment. Readers can take a look at our Twitter campaign through this Storify deck. We’re glad to say that nine minutes into our tweetathon, #MainHoon was trending in India at No. 44. The hash tag was able to reach out to 227,544 Twitter accounts and make 574,199 impressions. The Storify deck also shows that International Women’s Day was celebrated with great fervor across our centers in the country.

DEF is proud of the women at our Delhi headquarters and across regional centers. We’re especially proud of our women participants who used digital literacy, information services and ICT (internet and communication technologies) training provided at our centers to bring about a change in themselves, foster positive mindsets in their families and promote awareness in their communities. In this issue, you will get to read about several of the women achievers who have been empowered through DEF’s digital intervention. We at DEF will always remain dedicated towards empowering the marginalised and the underserved.