Maharaja Harendra Kishore Kendriya Zila Pustakalay which was established more than hundred years ago has been functioning as a district public library for twenty five years now. Until 2013, the library was not fully functional. Then came the Global Libraries (GL) pilot project in the library campus of Bettiah District Public Library, a project of the Bill & Melinda Gates Foundation (BMGF) in 2013 and implemented by the Digital Empowerment Foundation. Being the district library it had become imperative that it also became a centre for community interactions and this was made possible by DEF’s intervention under the support of the Bill and Melinda Gates Foundation.

July 3, 2015 marked the digital launch of this library. In a ribbon cutting ceremony, the Chief Guest Shri Lokesh Kumar Singh, I.A.S., District Magistrate, Bettiah, West Champaran inaugurated the Digital, Children & Competitive Sections of the library and the Soochna Seva Info desk. In his inaugural address he highlighted the importance of libraries for the community and unveiled the library logo and the activity compendium on stage. The activity compendium is a statistical and picturesque account of the input and the impact of the project so far. The Acting Librarian, Pt. Chaturbhuj Mishra briefly touched upon the library functioning and activities in his address after which Dr. Vimal Thakur, District Programme Officer talked about the importance of reviving the Library Management Committee (LMC). He also spoke about how the Department of Education would support the library’s development.

Dr. R.K. Choudhary (Principal, MJK College) and Dr. Shamshul Haque (Programme Officer, NSS Unit) shed light upon the combined efforts of the college and the Digital Section of the library to engage more youth in interactive activities. Dr. Neena Jha, Programme Director, DEF elucidated the future collaborations with The British Council, Avanti Fellows and The National Book Trust for the programs that are going to be launched in the library. She also drew the attention of the audience towards contributing in development of the library and expounded the need of community’s and Administration’s involvement in its advancement.

The Chief Guest, Shri Lokesh Kumar Singh expressed his joy and appreciation on seeing the library campus and infrastructure and spoke about constituting a new Library Management Committee. He also talked about aggregating various library development funds for infrastructural development. He ensured an updated book reserve and highlighted the importance of a library being for all and not just students so that the community at large may benefit from the services being offered within the library. In his address he also assured people of how administrative efforts would soon be noticeable in the development of the library.

Among other attendees were Mr. Yadunath Jha, Ms. Kajal Bharti, Mr. Ramendra Dwivedi, Library Members and other local residents. The event was compered by Mr. Jagmohan Kumar, Coordinator, DEF-Gates Library Project and the vote of thanks was given by Mr. Ravi Prakash, Project Assistant.

The launch event proved to be a great success in bridging the gap between the administration and the library project. Post event, the enthusiasm for engagement in library development was palpable among the audience. The efforts of DEF were applauded by the library members as well as the district administration. 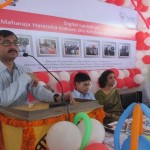 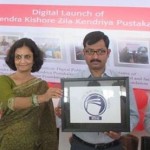 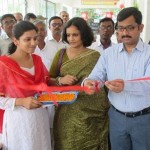 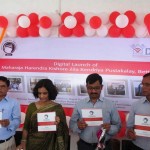