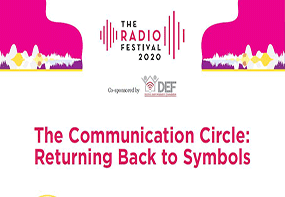 Breaking the barriers of languages- symbols,sounds & gestures have been a part of human communication from time immemorable. In the contemporary Digital Era, we have gone a full circle and returned to the use of symbols in a more developed pattern.

The digital revolution, especially the rise and pervasiveness of smart phones and other ICT tools, has given new meaning and acceptance to the symbols that are used regularly by the masses across ethnic and linguistic diversity. It provides insight that symbols are not only the manifestation of acceptance across many cultures and languages, but also a powerful tool of expression and creation of narratives.

There are around 500 million smartphone users across India, 200 million of which belong to small towns and rural India. Majority of these people have not received formal education, hence, can recognise iconised symbols like ‘forward’ or ‘share’ buttons from apps like WhatsApp and Facebook anywhere. Read More