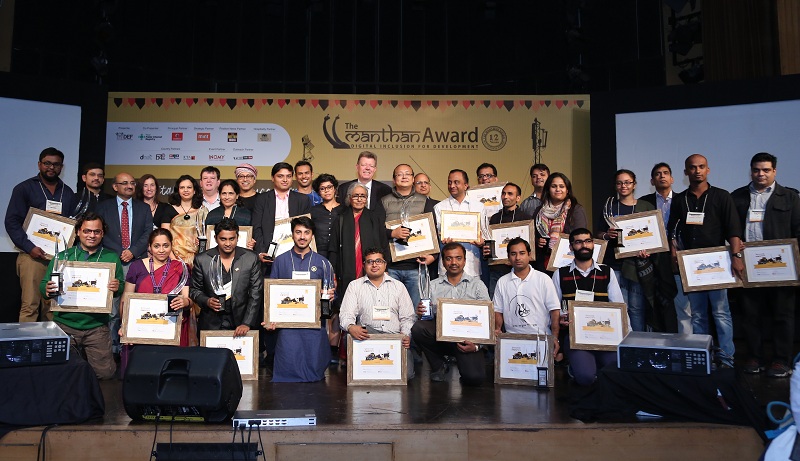 The 12th Manthan Awards 2015 were held this year in an all-new ‘un-conference’ style at India Habitat Centre, New-Delhi, on December 2, 2015.

The event began at 3 pm with more than 450 participants, speakers, delegates and award finalists — from all over South Asia and Asia Pacific region — registering at Charminar. In keeping with the style of the event, Charminar and the area around it was decorated in a village-theme, complete with hawker carts, well, chirpoi, bamboo sticks, hay stacks and much more.

Soon after the registration, various activities centred around ‘Digital Exclusion’ were kickstarted with 57 innovators (or Finalists) who enjoyed brainstorming and networking with several thought leaders from the development, corporate and government sectors. The ‘Digital Exclusion’ activities gave the Finalists, from across the 13 categories, an opportunity to conceptualise and analyse their respective ICT-based solutions on stage.

The activities were followed by high tea, a Rajasthani folk musical performance by a group of bhapang players and a stage play — conceptualised, scripted and inacted — by DEF employees who paid a tribute to their beloved Motilal Ji who had been an inspiration for DEF to mobilise tribal communities in Rajasthan and make them digitally literate.

Later in the evening, the award extravaganza commenced with a scintillating solo tabla performance by Suphala Patankar, which was followed by a jugalbandi between Suphala and the Rajasthani bhapang troupe. Their performances were greatly appreciated and cheered by the gathered audience, who were welcomed by the Founder-Director of Digital Empowerment Foundation, Mr. Osama Manzar.

Mr. Manzar also took the opportunity to screen a video celebrating the 12 years of Manthan Awards, followed by the preview of an upcoming documentary titled ‘Ocean in a Drop’.

The evening ended with the felicitation of the winners of the District Collector Digital Champion Awards 2015, followed by the unveiling of the books dedicated to the winners and nominees of the two awards.