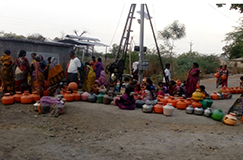 Paanchicholi village is based in Nilanga block of Latur district in Maharashtra. The population of this village is around 5,000, and most of them are engaged in agriculture as their only source of income. A farmer from this village committed suicide on January 6, 2016. He was 38 years old, and his name was Tukaram Digambar Jadhav He is survived by his father, mother, wife and three daughters — Snehal (8 years), Shravani (5 years) and Svetal (3 years). Latur district has been suffering from drought for about three to four years. And this year was no different.

Unable to bear the hardships and miseries of his family, Tukaram decided to end his life this winters. Though the government has granted his family compensation, it seems like a short-lived consolation because his children are too work to work and his 65-year-old father is too old to sustain the family.

Govind Manohar Chaame’s family recently met with the same fate. The 41-year-old committed suicide on March 21, 2016, in Anandwadi Gour village in Nilanga block of Latur district. Govind is survived by his father Manohar, mother Nirmala, wife Archana, 14-year-old daughter Snehal and nine-year-old son Omkaar. Govind was not able to meet the ends due to a continuous spell of drought for the last three to four years. He even had to sell his cattle because he could not afford fodder for it. The massive debts, inadequate produce year after year and no hope of a better future initially led Govind into depression, and finally towards death.

These are just two of the suicide cases. However, there have been many more farmer suicides this year on account of drought. Maharashtra is one of the states that is facing major drought spells, forcing farmers to take an extreme step.

In an effort to get better understanding of the ground situation, DEF carried out a survey IN nine drought-hit villages, and found out that farmers had taken their lives in at least six of these villages. DEF spoke to several of these families.

The villages surveyed are:

Lives of people in Latur district have been heavily affected due to the major water crisis in the region. On an average, each of these villages has a population of 3,000-4,000 people, and 90 per cent of them are involved in agriculture. The struggle for water has become so intense in these villages that farmers are paying the price with their lives. The story of plight is the same across all the villages in the region.

In an effort to open up opportunities for the youth and to provide them access to government information, DEF has provided a group of 35 girls and women in Mudgadh digital literacy through its dCIRC. Shrishti Suresh Suryavanshi is one of the girls who participated in computer training. Her father Suresh Maruti Suryavanshi is a retired bus driver who became a farmer a year years ago. Living in a family of 10 members, they are struggling to make ends meet.

She says, the village is suffering from extreme water shortage. They are provided borewell water once in every three days. The government has acquired borewells of some villages to address the shortage but it hasn’t been able to resolve the water issue completely. Villagers are not even sure if the water they are being supplied is suitable for consumption. In fact, several health issues have arisen in the village and nearby due to the water supplied by the government, which are either sourced from acquired borewells or tankers.

Based on the survey, the major problems identified by DEF are:

Based on these problems, we recommend: