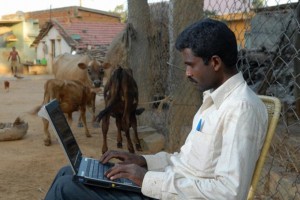 Known as International Labour Day, 1 May is a day of celebration of the working class. On the occasion of this day of celebration, for the past few years, I had been receiving invitations from an organization called the Mazdoor Kisan Shakti Sangathan to attend a workers’ community gathering in Bhim, a village in Rajasthan. This year, I finally managed to attend the mela.

Bhim is a small tehsil in Rajsamand district where, for the past 26 years, a group of 8,000-15,000 people have gathered on 1 May every year in an atmosphere of jubilation, joy and festivity to discuss their daily issues and rights, and to eat, drink, showcase their products and buy and sell. Most of the stalls at the mela sell or showcase products that have been made by the community members themselves.

This year, when Digital Empowerment Foundation (DEF) got an invitation, we thought why not set up a ‘digital stall’ at the mela. The stall would showcase various digital tools and services where one could buy new and old phones, solar-lamps-cum-phone-chargers and pen drives. Also, the stall would offer services like photocopying, scanning, printing, instant photography and lamination at Rs.1 per page of photocopy and Rs.30 for 15 passport-size photos.

We went through the entire process meticulously—it was our first time at something like this, after all. Besides, we wanted to gauge how rural India and villagers would react to a stall showcasing (or selling) digital cameras, mobile phones, SIM cards, pen drives, SD cards, etc., at a regular village fair.

Also, the stall was going to act as a grievances cell where issues related to entitlements could be discussed and solutions provided by registering their grievance on an online portal.

A total of 10,000 people attended the mela and about 3,000 people visited our stall. The pen drives were quite a hit. Entire families came to our stall and spent more than 20 minutes discussing among themselves how a pen drive could be useful for their children’s education, and then they asked us for more details about its use. Many, in fact, requested if we could sell pen drives with pre-loaded content (for education or entertainment), and they were willing to pay extra.

We had also prepared some fun activities for children and youth at our stall. We provided tablets to them to play games and even set up a gaming contest where we announced that the person who scored the highest points playing Temple Run at our stall will win a tablet.

Suddenly, the queue for gaming became longer. Parents who had been telling their children not to play the game more than once, brought them back to play multiple times in an effort to make the top score, even though it cost themRs.20 per turn. We were surprised to see some of these children play so well, despite having no access to a smartphone at their home or school. They told us that they had learnt the game on a friend’s or an acquaintance’s mobile.

We had taken a few tablets that had been donated by people and decided to put some of them on sale at Rs.3,500 to test if there is a market for tablets in rural India. After selling a few, we had to explain why all tablets would not cost as little as Rs.3,500. We also sold six refurbished (but in good condition) Lumia and Samsung phones at Rs.1,000 each. When the word got around the mela that we were selling low-cost smartphones, we got some extremely excited—even aggressive—customers. A lot of them were, in fact, furious that we had brought along so few of these smartphones.

My learning from this mela has been that rural India is hungry for digital devices as much as anybody else is. Villagers know what is useful for them and what isn’t. The threshold of their affordability for digital devices varies from Rs.50 to Rs.5,000, and under this everything should be available—whether it’s a computer, hard disk, pen drive or a mobile phone. Villagers want to spend money on digital devices as a tool for learning, for children’s growth and for entertainment. Also, people don’t want to buy anything without the promise and availability of after-sales support.

There is a huge market in rural India for refurbished digital devices. I’m so delighted with my experience in Bhim that we are now going to diversify all our 150 digital rural centres and introduce digital bazaars in them in order to make it possible for marginalized and underserved rural communities to have access to digital devices.

In fact, DEF has launched a movement called ‘MeraByte’. We encourage people in urban areas to donate all kinds of old and used (but functional) mobile phones, tablets, pen drives, SD cards, laptops, cameras, LCD screens, projectors and any other digital device or accessory that can then be provided to citizens in rural India. If you can donate your old phone or gadgets, just get in touch with us.

Osama Manzar is founder-director of Digital Empowerment Foundation and chair of Manthan and mBillionth awards. He is member, advisory board, at Alliance for Affordable Internet and has co-authored NetCh@kra–15 Years of Internet in India and Internet Economy of India. His Twitter handle is @osamamanzar