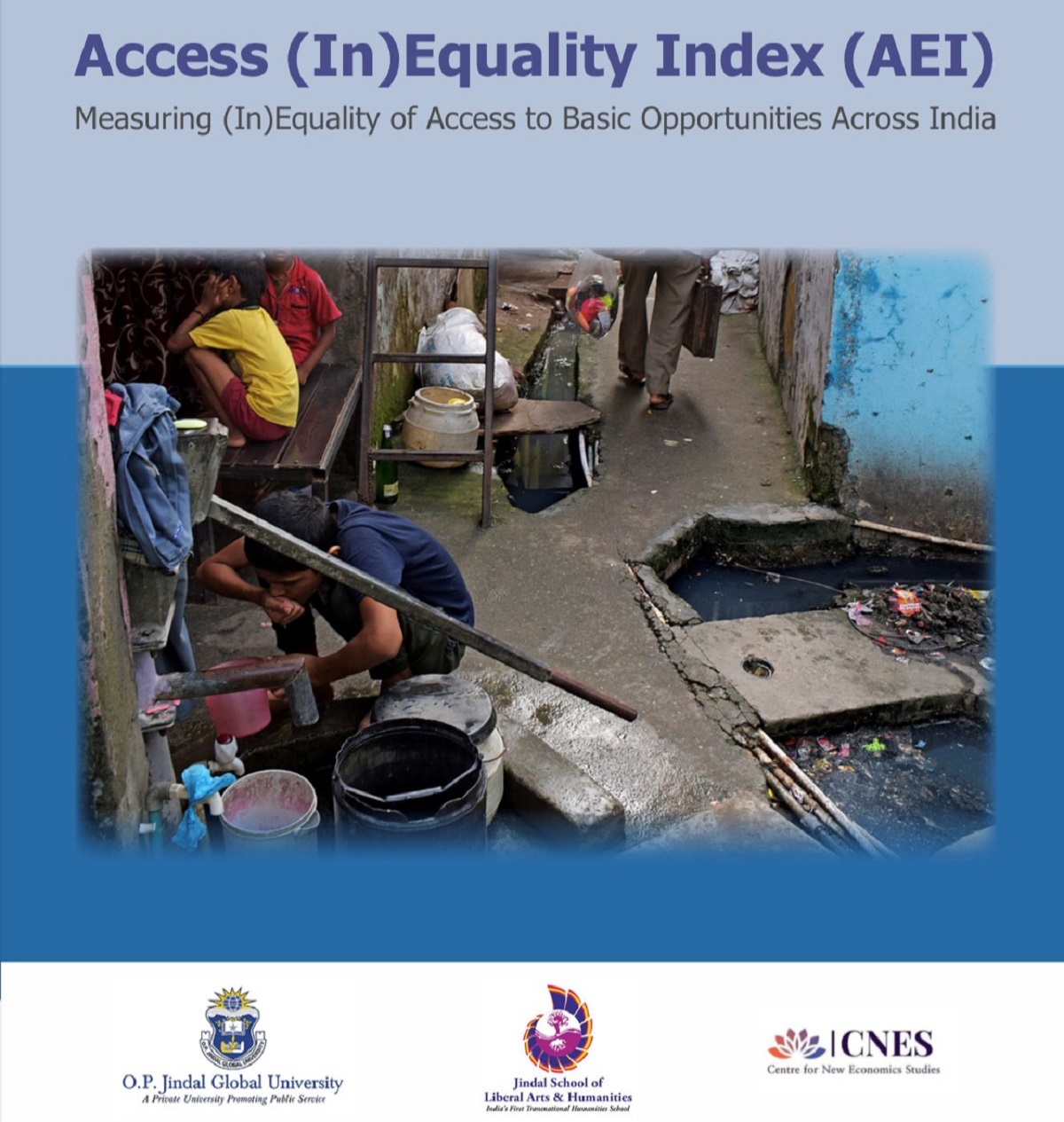 The Access (In)Equality Index [AEI] of OP Jindal Global University, 2021 puts a sharper and timely light on growing inequality in India in terms of access to health care, sanitation, water, education, decent work and other socio-economic opportunities. The Oxfam report sheds light on the much larger picture on wealth inequality and states: “the top 10% of the Indian population holds  77% of the total national wealth. 73% of the wealth generated in 2017 went to the richest 1%, while 67 million Indians who comprise the poorest half of the population saw only a 1% increase in their wealth.” This disparity is not a result of competence but how mechanisms of wealth generations are designed to empower the rich and not the poor sections of the society.

The AEI report not only focuses on inequality in terms of economy, demography and social process that generates the distribution of income but it also reflects on much deeper structural (in)equality of opportunities such as basic amenities, health care, education, access to justice and socio-economic security that depends on one’s gender, family background, ethnicity, place of birth, etc., or the social and cultural capital one possesses. According to the Oxfam report –– The Inequality Virus –– these inequalities have worsened during the pandemic and subsequent measures to curb the spread of the virus. 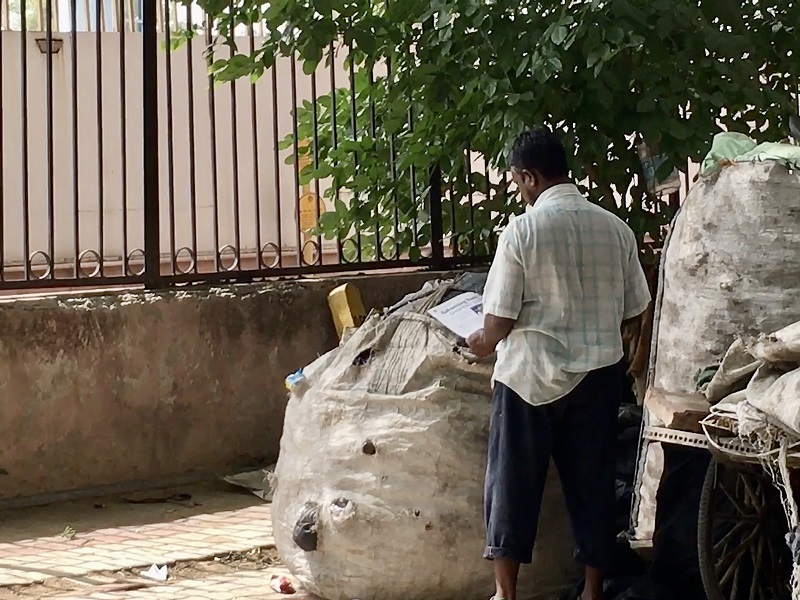 The Inequality Virus report states: “The wealth of Indian billionaires increased by 35 % during the lockdown and by 90% since 2009 to $422.9 billion ranking India sixth in the world after the United States of America, China, Germany, Russia and France.” This is when Indian poor working labourers in the cities were forced into a life endangering journey back to their villages without any support from the government. The sudden announcement of nationwide lockdown,  compelled the migrant workers to leave for their villages. In the absence of public transport, they travelled hundreds of kilometers on foot. Men, women, and children, walked miles together with little food and water, sustaining on handouts, experiencing the wrath of the brutal police force, unable to maintain the very social distance that they were supposed to maintain in the face of this deadly pandemic.

This was not just a failure of planning and policy. It was the apathy and antipathy towards the poor. The second wave of COVID–19 uncovered another story of mismanagement and apathy. We could see people roaming around cities to get an oxygen cylinder because patients were gasping for breath, people died outside the hospital, and dead bodies were flushed in the Ganga. Researchers found that during the pandemic 3.4 million to 4.7 million people have died –– 10 times higher than India’s official COVID–19 death toll. This underscores not only wealth inequality but social and political privilege that is a major contributing factor in what individuals can access and how policies are designed and announced.

“Access” in AEI report is conceptualised to encompass the “4As”, namely 1) Availability 2) Affordability 3) Approachability and 4) Appropriateness. The 4As concept of “Access” might not address inequalities in all aspects of social and human development but it can be expanded to cover critical access including basic amenities, health, education, justice and for addressing socio-economic inequalities. On the basis of this conception, AEI ranks Indian states and Union Territories (UTs) in terms of access to critical services to its people.

The findings from the composite index indicates that the states such as Goa, Sikkim, Himachal Pradesh and Punjab have the advantage of better coverage of services geographically and demographically. Among larger states, Tamil Nadu, Kerala, Telangana, Karnataka, and Andhra Pradesh have performed the best, and thus, provide better access to critical human development opportunities to its people. The states with the least overall access to opportunities are Bihar, Uttar Pradesh, Jharkhand, Assam, Odisha and Madhya Pradesh. Among UTs, despite all the tall claims by the Delhi Government, Chandigarh and Puducherry tops the chart.

The AEI report also comments on urban-rural divide, gender and caste, as the deciding factors in accessing opportunities, including access to basic amenities such as safe drinking water, housing, clean energy, sanitation, health care, education, decent work. Various caste groups such as (Schedule Caste (SC), Schedule Tribe (ST) and Other Backward Class (OBC)) in India play a major role in exclusion and further hinder the access to basic amenities and results in socio-economic deprivation. The report does not exactly address the role of religion in socio-economic exclusion and how it further deprives the religious minority groups in the country. Compared to other religious communities, Muslim –– India’s largest religious minority –– lags on every indicator of human development including education, employment, health, and political representation. 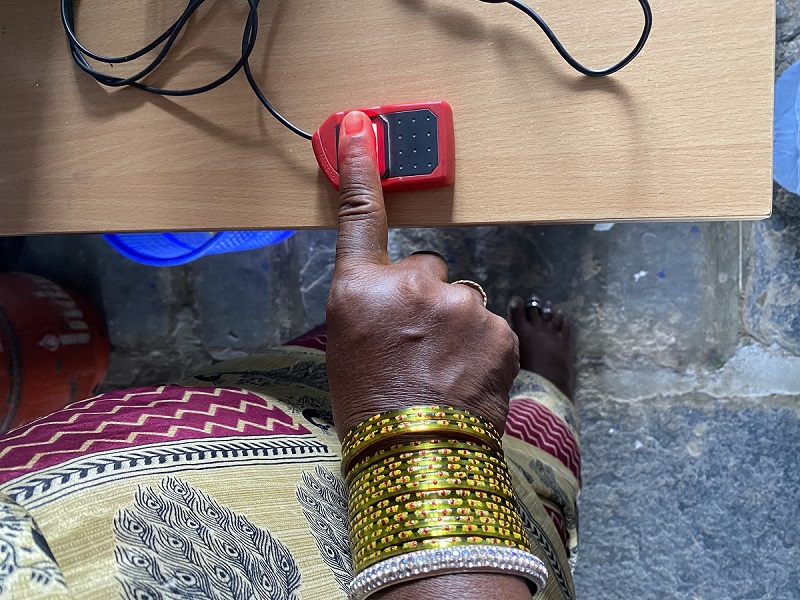 Digital access is another critical component in terms of assessing socio-economic opportunities and COVID–19 has only exacerbated this criticality. Digital access has become a line between hunger and survival due to uncritical imposition of technologies in accessing social welfare programmes such as the Public Distribution System (PDS), Mahatma Gandhi National Rural Employment Guarantee Act (MGNREGA), etc. On an average only 41% of the individuals in the Indian states are internet users, while 66% of these are the main users of at least one mobile phone.

The internet users in Goa, Punjab, Kerala, Sikkim and Haryana make up for 59%, 56%, 59%, 38% and 51% of the population respectively. The average number of mobile users in the top five states is 68% of the population. The access to digital infrastructures has become essential as educational institutes have adopted the online educational mode during the COVID–19. While reports only paint a picture of access to the Internet but along with accessibility, positionality is also critical in leveraging benefits of accessing the Internet. You can access the full report here.

(Asheef is Research Associate with Digital Empowerment Foundation. His interests lie at the intersection of technology, inequality, and society.)