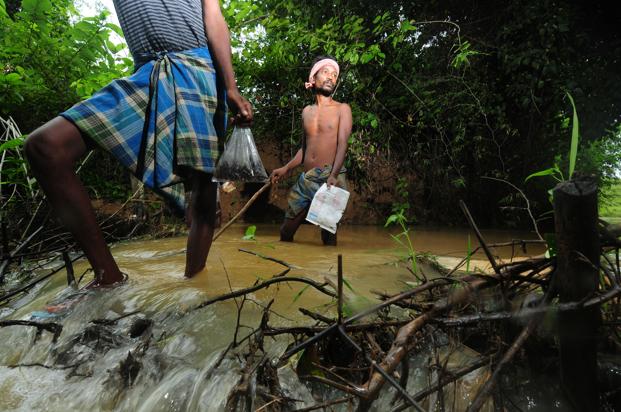 This article was first published by the Mint newspaper on July 14, 2014.

Tribals are the true sons of the soil. India has a tribal population of an estimated 100 million. Of them, 40 million—or say 8-10 million families—live in and around forests and other remote areas.

This could mean an agricultural area of around 20-40 million acres, if each family has an average of two plots of two to four acres each. In a remote area, a typical village may have 100 families or households with an average of 250-300 acres of agricultural land. The village may also have its common land of 1,000-1,200 acres, which could be part of the forest, but allowed to be used by villagers entitled for minor forest produce.

How can we map all this land and provide entitlements to its users?

Considering the experiences of non-government organisations (NGOs) working in forest areas, it is estimated that no more than 50% of the people or households may have some kind of title or tenure under various laws which could identify them as land owners.

Yet, 50% of village land in tribal areas—at least 20 million plots belonging to some individual or family—is not documented or titled, which could gets titles under the Forest Rights Act (FRA) 2006.

According to the FRA, anybody cultivating his or her land or who had a hold on land as of December 2005, can claim title to the land. Unfortunately, in tribal areas, or across forest lands, our tribal brethren have been cultivating their land passed on by their ancestors without any documentation in place.

Not surprisingly, most of the tribals are treated as encroachers of their own land.

But low-cost technology and community involvement can change the scenario. Even the poorest of the poor, illiterate and living in remote areas, can make use of simple GPS devices to prepare documentary proof of their land-use and get titles for their land. The change-makers highlighted here are ARCH (Action Research in Community Health & Development) and the Liberty Institute, two not-for-profit organisations who have collaborated in this field.

Barun Mitra of the Liberty Institute says they “help poor communities prepare and substantiate claims for their traditional land, using simple hand-held GPS instruments to survey their holdings. And map these onto satellite imagery”.

The initiative is called ‘Right to Property’ and one can go to their map-enabled website at http://righttoproperty.org and find more than 12,000 entitlements recorded and claimed across the tribal areas of Chhattisgarh, Gujarat and Odisha.

The methodology is simple: Liberty Institute has trained individuals under an ARCH Vahini, who find and partner hyper-local NGOs to mobilise local communities. They help create volunteer groups to conduct surveys using hand-held GPS devices and feed details about the land surveyed. The data is transferred to memory cards, connected to computers and uploaded to the Internet. Prints are also taken for further processing of entitlement claims.

The beauty of the process is the involvement of the community, which takes the onus of land mapping, since they are the prime stakeholders. It is inexpensive, participatory and results in few disputes, as community members know who has been using which piece of land for how long.

According to the Liberty Institute, “out of the total 12,000 claims that has been GIS-mapped and submitted for approval, about 90% of the claims was approved on the basis of this evidence”.

Incidentally, in the rest of the tribal areas of Gujarat where ARCH does not run this project, 180,000 claims were filed of which only 50,000 were approved. “We believe all those rejected claims would be genuine, but were rejected due to very narrow definition of what imagery was acceptable and who did the survey,” claims Barun.

For now, ARCH has just 35 GPS devices costing Rs.15,000 each, donated by friends and individuals, which are used across villages. They plan to cover at least 1,000 villages in the coming months. Scaling up this model to GPS-survey all agricultural land through community participation will be a unique example of bottom-up crowd-sourced data and empower the landless poor in India.