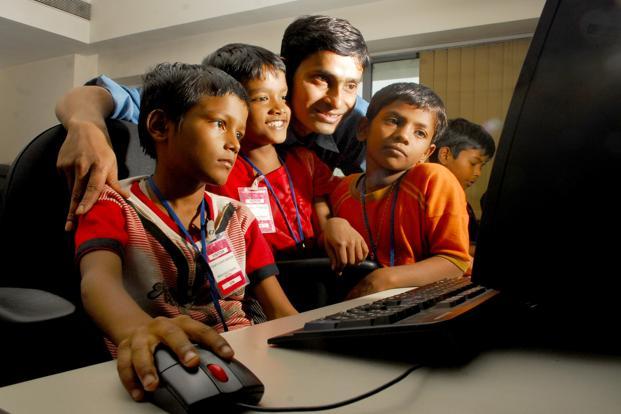 This article was first published in the Mint newspaper on June 1,2016.

A few months ago, children in Mungaska village in Alwar district of Rajasthan started using Google Images to travel around the country. Aman, one of the children there, who studies in Class V, had been reading about Qutub Minar in his school textbooks.

A few months ago, children in Mungaska village in Alwar district of Rajasthan started using Google Images to travel around the country. Aman, one of the children there, who studies in Class V, had been reading about Qutub Minar in his school textbooks.

He had seen pictures but he didn’t know much about the structure other than who built it and when—the usual things that you read in school history books. So one day after he returned from school, he went to a local Community Information Resource Centre (CIRC) near his house and Googled ‘Qutub Minar’. He was amazed to find pictures which were not limited to the minaret and the garden around it. He could see the arches in the monument complex and the ruins too. CIRCs are community-oriented digital centres established to create information-empowered, equitable communities across the country.

Each CIRC, manned by a centre coordinator and a trainer, is equipped with computers, laptops, digital camera, scanner, printer and any other necessary digital tool that locals can learn to use and access. At these centres, a community member can enrol for digital literacy classes for a one-time registration fee of Rs.150, and avail digital services such as photocopying and scanning for Rs.1 per page.

At Roza Ka Baas, another village in Alwar district, a 13-year-old boy named Sahil has memorised the entire map of the Taj Mahal by simply looking at 3D images of the monument. When he was asked what made him ‘Google’ the Taj specifically, he said that people from all over the world come to India just to see that one monument and he wanted to know why. “But I can’t travel to Agra; it’s very far. So I am looking it up on Google,” he said.

With their knowledge of operating computers and access to the Internet, children all across the country are exploring places they may not have a chance to see physically.

When we had a little sit-down session with Sahil, he showed us at least 10 different pictures of the Taj Mahal that he had saved on the computer. Each picture was from a different angle, and focused on a different part of the complex.

After he had finished giving us an almost virtual tour of the Taj Mahal, many other children too chimed in wanting to show us their favourite places using Google. While somebody had virtually travelled to Jaipur and another to Hyderabad, one child had opted to explore Kolkata because her father had worked there as a young boy. Yet another child was happy to look around the streets of Alwar through Google Images.

There was one boy, who even “travelled” to the US through Google on the recommendation of an American citizen who was travelling with us to Alwar, but he did not enjoy it much. Instead he found Red Fort in Delhi much more engaging.

Use of the Internet for the first time—and that too in villages and remote areas—has been throwing absolutely unimaginable outcomes.

We are learning about some unique social and behavioural experiences, especially among children who are accessing computers and the Internet for the first time in their lives. In fact, school-going children always form the biggest group of people coming to receive digital literacy. But these children are not always excited about it from the perspective of receiving “education”.

A lot of them are actually only enrolled because their parents see a bright future for them. Many others come because they are allowed to play video games or watch YouTube videos after an hour of working on Microsoft Office.

Of late, Google Search has become extremely popular among children because of its interactive features and as it allows users unrestricted access to unlimited information in different media formats.

From games, entertainment and education video clips to notes for classroom examinations, everything is available at the click of a button for the children.

Over the last few months, I’ve travelled to a lot of places from Saidanpur in Barabanki district of Uttar Pradesh, Sohagpur in Hoshangabad district of Madhya Pradesh, Bhim in Rajsamand district of Rajasthan, Musiri in Trichy district of Tamil Nadu and the village of Vaidikuppam in Puducherry—everywhere I see an interest among children to look up places on Google Search or watch ‘edutaining’ (educational + entertainment) videos on YouTube.

It’s interesting and heartening to see these children discover different places, people, geographies, food, culture and tradition on their own. People who had never stepped out of their villages are now travelling virtually throughout India.

Children are curious, and the schools in India are not always the best places to encourage such curiosity in children. Because of the skewed teacher-student ratio in almost every Indian classroom, the most innocent but important questions are often ignored; or worse, they are not even given a chance to ask.

Access to the Internet is bridging this divide. Online access to content is not trying to replace traditional mainstream classroom education. It is, in fact, complementing mainstream education and giving children more than one platform to find answers to their questions.

The idea of using Google Images to travel the world gives us a new perspective on how our digital centres are contributing to the society and making an impact. Digital literacy has never been only about knowing how to work on Excel sheets or writing your name on Word, but exploring so much more.

In fact, there is no end to what one can do with computers and the Internet. I think it’s an achievement for us as well that our digital centres have helped children and adults to look at education in a non-traditional manner.