The Game of Fake News

You are here:
September 18, 2018Leave a commentDigital FootprintsBy Udita Chaturvedi 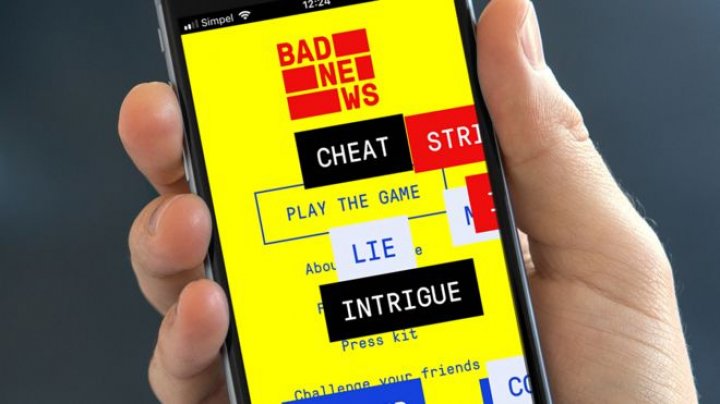 Get Bad News makes you drop all pretense of ethics and choose the path of an unscrupulous media magnate.

By Osama Manzar and Sharada Kerkar

There’s enough of fake news around us today. There’s enough of “fake news”, the phrase, being thrown around us today. Many of us understand the agenda and strategising that goes behind it, but many of us don’t. In the last couple of years, the phenomenon of fake news has only increased with increased political efforts at polarisation in the US, in India and in various other parts of the world. So how does one differentiate between accurate information and fake news? Or do you ever wonder how easy or difficult it is to have people “following” your “fake” agenda? Well, there’s a game for it now.
GetBadNews is a game, designed by Cambridge Social Decision-Making Lab, that exploits the spirit of competitiveness and evokes the urge to be popular on social media. In this game, the player is the antagonist whose goal is to become a fake news expert.
To play the game, you have to train your mind to cheat, exploit emotions, take revenge, dramatise events, attract attention, kill morality and create disinformation. If you do this successfully, you win a total of six badges of ‘dishonour’ and a high number of followers on a simulated Twitter-like platform.
The Web-based interactive game encourages you to bring out the ‘tweet-smart entrepreneur’ in you, one who must put aside his/her morals and ethics to become a social media news influencer. And to help you stay on track—of dishonesty—is a virtual assistant who guides you, questions you and often consults you to make the “right decision”. This assistant represents your evil side—the inner voice or the other half of your conscience—that is often on a leash (or, depending on which voice is louder in your head, on the loose).
If you listen to the virtuous voice for more than a few times, it’s game over for you. With it, your chances of being heard on social media are done and dusted too. But in this age and time of digital communication, the evil voice sounds so much more enticing. It tells you to cheat, win and exploit the audience to increase your followers.

It forces you to polarise the online community and congratulates you for discrediting genuine stories, people or organisations. It teaches you to be irresponsible and entertain yourself at the cost of others. It also encourages you to be a conman or impersonate somebody’s identity to earn “credibility”.

As the game progresses, every decision you make is tested. If your decision is inclined towards truth, you are looked upon as weak and adviced to make more aggressive decisions, one that would gain you followers but not necessarily authenticity. You are taught to be revengeful and conspire against your competitors. You are encouraged to troll and post inflammatory information to lure your followers into combative arguments and fights, which in turn gets you more eyes. It forces you to polarise the online community and congratulates you for discrediting genuine stories, people or organisations. It teaches you to be irresponsible and entertain yourself at the cost of others. It also encourages you to be a conman or impersonate somebody’s identity to earn “credibility”.
And once you make the “right” choices, you win the badges of Trolling, Discredit, Conspiracy, Impersonation, Emotion and Polarization, eventually certifying you as a Fake News Expert.
I played the game twice. In my first attempt, I had lost within three minutes, earning just one badge and 12 followers. It made me reflect on my actual Twitter feed and feel amused. There have been so many times when I thought I had shared an informative tweet, but it got only a couple of retweets. On the other hand, my political opinions and rare rants on Twitter often go viral.
In my second attempt at the game, I put my virtuous voice on mute and my evil voice on loud. Within 20 minutes, I had found 5,666 loyal followers and earned the six badges of dishonour. However, in these 20 minutes, my conscience was tested multiple times and I had to literally force myself to make a decision against truth, morality, genuinely and empathy to win the game. And I did, but how much damage had I caused was not assessed.
For me, the goal was to win a one-time virtual game. For many, fake news is the pragmatic approach towards winning the real-world information scenario with a business model in an online and highly connected space.
[In an effort to fight this growing menace of fake news and misinformation, DEF has joined hands with WhatsApp. In the run-up to the upcoming Assembly and General elections, DEF has committed to hold a series of training sessions for community leaders in 10 states where there have been worrisome cases of violence or where state polls are due before the end of the year.]
—
Osama Manzar is founder-director of Digital Empowerment Foundation and chair of Manthan and mBillionth awards. He is member, advisory board, at Alliance for Affordable Internet and has co-authored NetCh@kra–15 Years of Internet in India and Internet Economy of India. He tweets @osamamanzar.
[easy-tweet tweet=”For many, fake news is the pragmatic approach towards winning the real-world information scenario with a business model in an online and highly connected space. #GetBadNews #FightingFakeNews”]
Fake NewsGetBadNewsMisinformationWhatsApp
Share this post
FacebookGoogle+Twitter
About the author

Related posts
The Digital Stories of Fishermen Community of Chirala
October 12, 2021
Arif is gone, he succumbed to the second wave of COVID-19
May 23, 2021
Digital Citizen- Strive for Human Peace
October 28, 2020
From Benign Web to Misinformed Internet, are we prepared?
October 28, 2020
Social Divide Persists Digital Divide
October 28, 2020
The New Language of Symbols
October 28, 2020