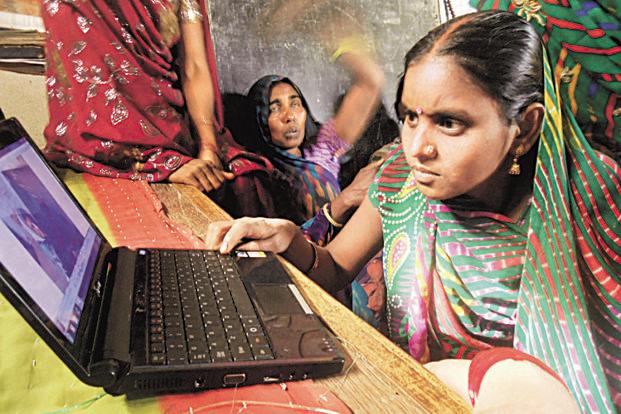 This article was first published in the Mint newspaper on January 4, 2016.

He hasn’t been to high school, yet he’s been a research guide for several Ph.D. scholars over the years. He is a grandfather but his agility is remarkable. He has been a calligrapher, historian, photographer, author, traveller, tourist guide and weaver; and now he’s also a digital salesman, social media practitioner and website manager.

I remember my first meeting with Muzaffar Ansari aka Kalle Bhai. It was in 2009 when I had gone to Chanderi in Madhya Pradesh to see what digital interventions could be introduced for weavers of the town. The first person that I met in Chanderi was Kalle Bhai, who had come to receive me at Lalitpur railway station (the closest to the town). I remember being surprised by how well-versed he was in Urdu. Kalle Bhai turned out to be a great motivator for us to understand the culture, tradition, people and problems of Chanderi and that eventually led us to start a project called Chanderiyaan in the town.

Besides narrating folklore, Kalle Bhai also spoke to us about problems of Chanderi, and one of them was the lack of a railway station. This remains a problem even today. With no railway station, Chanderi rarely figures on the itinerary of tourists.

People who travel to Madhya Pradesh visit Khajuraho, Jhansi, Ujjain, Gwalior and other places but hardly ever head to Chanderi, even though there are about 350 monuments in a 5km radius of the town.

At home, Kalle Bhai has a rich collection of historic and ancient stones, coins, papers and utensils of various eras. And he can identify each one of the coins, and tell you to which period they belong. In Chanderi, he can take you to historic places not known to many and he has filed several papers on the unknown history of Chanderi and various possible excavation sites. He’s like a walking-talking encyclopedia on Chanderi.

To help him get published again, we took along two interns from the manuscript division of the National Museum, New Delhi, which hosts a post graduate program under Delhi University, to Chanderi for a month. Every morning, Kalle Bhai and the interns would set off on his motorcycle and travel around the town, photographing its many monuments. In the evening, they would return and Kalle Bhai would dictate the history of each of the places they visited during the day. The result of this month-long exercise was a 200-page coffee table book called Chanderi: History, Heritage, Culture.

Over time, Kalle Bhai and I have become good friends. When we started our project in Chanderi, he taught us history and we taught him technology; it was an unstated pact between us. Gradually, he has learnt to operate a computer and camera on his own. Today, he looks after the website for Chanderiyaan, photographs the monuments for his books, takes orders for weavers on WhatsApp, manages social media pages and even doubles up as a tourist guide for visitors. He can speak Urdu, Hindi, Arabic, English and a little French and can write in Gujarati, Bengali, Brahmi and Kharosthi. All this, despite having studied only till Class VI.

Kalle Bhai comes from a family that wasn’t well off. When he was promoted from Class VI to Class VII, his father couldn’t immediately afford to buy new books for him and eventually Kalle Bhai had to drop out. However, dropping out of school did not mean he stopped pursuing his passion for history.

It is this thirst for knowledge that has encouraged him to build a brand for Chanderi tourism, learn how to set up a wireless network, manage an e-commerce portal, handle social media platforms and even design/weave with the local weavers.

This is the kind of learning spirit that we encourage among all our beneficiaries. We work in more than 170 villages of India and, as expected, almost every village speaks a different language or dialect. Forget the knowledge of English, many of these villagers don’t even understand Hindi. Some have completed school and earned a bachelor’s degree; others have dropped out of school. Many others haven’t been to school at all. Unfortunately, their traditional knowledge or self-taught lessons don’t count in our modern education system.

Yet, lack of modern education or not understanding English has never come in the way of these people learning how to use a computer. Be it a 10-year-old girl or a 60-year-old man, they take to computers as humans take to swimming and cycling.

The time they take to learn how to manoeuvre the mouse or navigate a computer screen might be different, but once they learn they never forget. And there is no limit to learning online. The Internet is full of information; all one needs is a thirst for knowledge. All you need is a Kalle Bhai in the mix.

Osama Manzar is founder-director of Digital Empowerment Foundation and chair of Manthan and mBillionth awards. He is member, advisory board, at Alliance for Affordable Internet and has co-authored NetCh@kra–15 Years of Internet in India and Internet Economy of India.