Lifting the burden of a debt 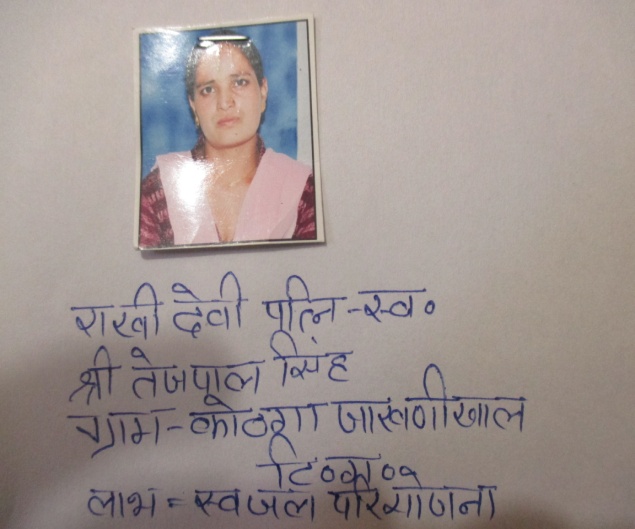 Rakhi Devi, a 26-year-old widow and mother of a five-year-old son, was worried about paying a debt that was long due. A few years ago, Rakhi and her husband had taken a loan to build a toilet for her family. However, in 2014, Rakhi lost her husband Tejpal Singh. With him, she also lost any financial support that she had. Her in-laws refused to help her and broke all contacts with her.

Today, she lives with her son in Jakhanikhal village of Uttarakhand. Wages from her 100 days of annual labour under the MGNREGA scheme is the only source of income for her small household. It’s just barely enough to feed the two of them. But Rakhi Devi now sees a silver lining at the end of the tunnel.

In May, some Soochna Seva Kendra (SSK) volunteers were campaigning for the importance of RTI and the right to entitlements in Pratap Nagar block of Tehri Garhwal region of Uttarakhand. They also traveled to Rakhi Devi’s village and met several locals. It was during this visit of the volunteers that Rakhi approached them and sought help. The sevaks informed Rakhi about the Swajal Pariyojana government scheme that gives Rs. 12,000 to anybody who wants to build a toilet in rural areas of India.

Rakhi Devi was elated with this piece of information. She was even happier when the Soochna Seva team helped her arrange and organise all the necessary paperwork for the same.

The documents have now been submitted to the panchayat head, and Rakhi Devi will be the recipient of the amount within the next two months. With this financial burden lightened, she now plans to concentrate on planning the future for her son.

Related posts
Kalle Bhai – A man of many stories
October 17, 2016
Shiva is training HIV-infected children in computers to make them financially independent
August 1, 2016
PCs are taking folk music from Rajasthan to a Global audience
August 1, 2016
Anita Devi wants to give a boost to her business
July 12, 2016
From Design to Sales – How Digitisation Is Empowering the Chanderi Weavers of MP
June 28, 2016
Intervention for equality
June 23, 2016