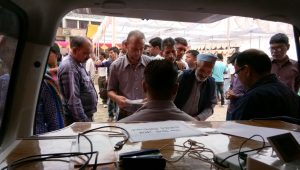 The Department of Social Welfare in Tehri Gharwal is constantly working to bridge the gap between marginalised population of the society and the mainstream. Implementation of social security and welfare schemes is being taken up on priority with increased coverage of schemes every year. On June 27, 2017, it organised a multi-purpose camp at Pratap Inter College, New Tehri. The camp witnessed the presence of District Magistrate Sonika, Chief Development Officer Ashish Bhatgai, MLA Vikram Singh Negi, District Welfare Officer Avinash Singh Bhaduria, Block Development Officers Vijay Ghunsola, Anandi and Baby Oswal.

The main objective of the camp was to reach out to the marginalised community of the district and register them under various social security schemes. For the awareness and promotion of the camp, Soochna Seva team was approached, and they facilitated a large gathering of individuals across four blocks of Tehri Garhwal, who were keen to enroll for public schemes. At this camp, several wheelchairs and spectacles were distributed among the disabled and the elderly, while children were tested for malnutrition by a team of doctors from Dehradun. A stall was even put up by the Soochna Seva team to provide digital services to community members. A total of 479 people participated in the camp and availed different health services.

A third camp, labour registration camp, was organised in Getalsud district of Jharkhand where Block Labour Enforcement Officer Deepak James, Chief-in-Charge Hemant Kumar and the Construction Workers Welfare Board informed citizens about various accommodations, pension schemes, insurance schemes, scholarship programmes and other benefits they can avail. By the end of the camp, 90 individuals have filled application for different schemes.