Women find a friend in smartphones 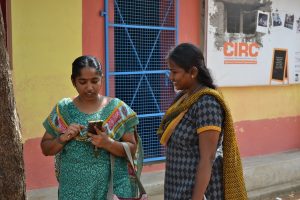 Rakhi Uikey, from Kesla block in the Hoshangabad district in Madhya Pradesh, goes around her village to teach women how to use a mobile phone and access the Internet. The house she visits belongs to a woman, who must be in her late 40s and earns a livelihood through poultry farming. An illiterate, she giggles shyly when Rakhi tells her that she is there to teach her how to use a mobile phone.

They sit next to each other by the door — one woman swiftly using a smartphone, the other peeping into the screen amazed by her companion’s ease at handling the device.

“Are you scared? Don’t be,” says Rakhi encouragingly, to which the woman replies, smiling nervously, that she is a little scared to touch the phone, lest she breaks it.

Rakhi is an Internet Saathi. Internet Saathi is a project initiated by Google and Tata Trusts, and implemented by various partner organisations across the state. Digital Empowerment Foundation (DEF) is the implementation partner for Bihar and Madhya Pradesh.

[Through this project, DEF aims to mobilise 3,000 women volunteers (or Internet Saathis) and equip them with ICT tools and knowledge to connect remote communities with the mainstream world, thus bringing them out of information darkness. Planned as a ripple effect, these 3,000 women will further train others in digital tools, eventually reaching out to 18,00,000 beneficiaries across 10,000 villages across the two states. The programme includes an awareness module, coupled with hands-on training modules aimed at teaching women how to use the Internet, including through mobile devices. Internet Saathi sends women out on bicycles, armed with a smartphone and a tablet, to let women in villages experience the net.]

During the rest of the session in Kesla, our Saathi teaches the woman, and two others, who have joined them later, to make calls, click photographs, and use the OK Google feature to search for photographs of designs for sarees. The women, hesitant at first, slowly start enjoying the lesson — tapping the screen, taking selfies and speaking into the microphone. They are even joined by some young boys — some of them their children and others from the neighbourhood — as they look on and tell the women to only tap the screen gently, and not forcibly, as a novice does. The session lasts for about 45 minutes, and Rakhi promises to be back to teach them more next time.

Rakhi finds it easier to interact with women, even those she’s meeting/visting for the first time, since she is part of an SHG group and is known by most women in the village. She lives with her two children in Kesla block while her husband works at a factory in the state capital Bhopal. Back home, she alone juggles her roles and responsibilities between facilitating SHG meetings, looking after her children, and running the household. In between all of this, with a bag on her shoulder and a phone in her hand, she goes door-to-door, helping women experience the Internet and get online. She teaches women to use mobile phones and the Internet to access information about anything that may interest them.

Rakhi is one of the 3,000 women across rural Madhya Pradesh and Bihar, who have been equipped with a smartphone and undergone a three-day training under Google and TATA Trust’s Internet Saathi project.

Although, there is a mobile phone in each household, regular visits by Rakhi and others Saathis in the two states, has culminated into women desiring their own smartphones. This indicates that there is an increased awareness about the ownership of phones, which is mostly restricted to men — a reason why 72 per cent women in India do not own mobile phones, let alone smartphones. This desire for smartphones is also a sign of women wanting to be self-reliant.

“Women don’t always have to depend on men. [If they know how to access the Internet] They can look for jobs, find new recipes, or even access entertainment on their own,” says Rakhi.

Over time, an inherent change is visible in the attitudes of not just the women who are being introduced to the Internet by the Saathis but even among the Saathis. For many, it has been their first experience using a smartphone. Nisha Umri, from Pipariya in Madhya Pradesh, was the first one in her family to use a smartphone. She feels it is liberating to be able to connect to the outside world with just a device and Internet connection. There are others who understand the power of the medium, and encourage women to see for themselves what they can do with it.

“Women would travel to the nearest towns to get their clothes stitched. Now when I show them videos of stitching, they have started borrowing stitching machines, and want to start doing it on their own using YouTube videos,” says Arti Kahar, a 21-year-old Saathi from Saohagpur in Madhya Pradesh. With a bachelor’s degree in computer, she is one of the few Saathis who have experience in technology.

Despite the fact that women in rural areas are warming up to using technology, there is still a long way to go. One of the biggest challenges that the Internet Saathis face is letting women give them an opportunity to show them the benefits of a phone. If it isn’t the women themselves, it the men they have to circumvent and convince to get a chance to speak to the women in the house and make them understand the need to bring women to the fore in the digital world. The distrust is visible more when the Saathis are travelling to neighbouring villages, where they are not known among community members who feel wary of the Saathis’ intentions. However, with regular visits and the wonders of a phone in hand, the Saathis are eventually able to establish their presence in the community and engage women.

“I often show women videos of things they would like to see — the Taj Mahal, religious songs or even Mehendi designs,” Kishan Bai says.

Jaanki Devi, a Saathi from Guna in Madhya Pradesh, has made quite a presence in the villages she frequents. Known as ‘Kisan Didi’, she doles out information on best framing practices to farmers. Women come to her to find out about a variety of things — exam results, job opportunities and even cashless transactions. She has become so popular that people often visit her home to learn about the Internet rather than the other way.

Internet Saathi has helped women step out of their homes, and increased mobility. It is slowly building a community of women who see the potential of a mobile phone changing their lives and who — with the help of each other — are navigating their way through the ICT medium, slowly breaking out of the social and cultural barriers that restrict them.

Rakhi says, “I have only studied until the Grade VIII but Internet Saathi has given me the opportunity to learn something new, after many years of having left education.” There are many others like her, for whom the programme has opened up new avenues, and now see a world of opportunities, that were hitherto unavailable to them.