Access and not availability is the need of the hour 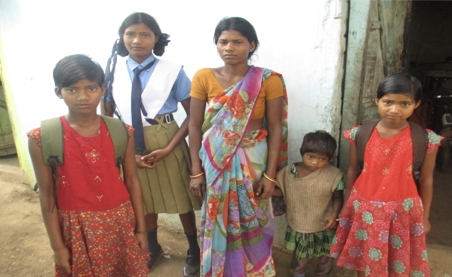 Sabita Khalkho (35) is a mother of five children — Sakshi, Shashi, Beronika, Sajna and Sushmita — who spends most of the year in the absence of her husband who works outside Ranchi district at a brick kiln. Though he only visits his wife and children once every three months, his presence isn’t very helpful either. The man drinks regularly and often spends large chunks of his wages on liquor. Sabita is a hardworking woman who works in the vegetable market earn enough to feed her children. However, it’s not enough to send them to school.

A Soochna Sevak once happened to meet her and got talking. It was during this conversation that he learnt that her children were missing out on their right to education. When they asked Sabita why she wasn’t sending her kids to school, she said, “I am in the market from morning till night every day. If I skip work even for a day to get them admitted into a school, that will mean I will have to let go of one day’s wage. And I cannot afford to do that.”

Having heard this, the Soochna Sevak offered his help and decided to take her children to St. Ignasius Balika Vidyalaya, a school located not very far from their home, and get them enrolled for free under the government’s education programme.

This is the story of one family who has been able to benefit from government schemes and services because Soocha Seva made it possible for her to access the same. Here, we’ll like to share a few more stories from the ground with you to highlight the importance of access to government schemes and not just their availability.

Sixty-five-year-old Budhan Devi and her husband Somra Gope are agricultural and cattle farmers based in Malar village in Itki block of Ranchi, Jharkand.

The couple is parents to two sons, both of whom are married and alcoholics. Due to this, they are barely of any help in the field to Budhan Devi and her husband, who themselves can’t put the same number of hours in the field as they use to earlier on account of their age. Therefore, over the last few years, cattle rearing has become their primary source of income.

When Budhan Devi recently came across a Soochna Sevak recently on the road, she expressed her grief over heavy losses following the demise of her cattle. Apparently, in just the last few months, the family had lost six goats, leading to a heavy blow on their household income.

When the Soochna Seva team was informed about this, they immediately decided to consult a veterinary doctor who adviced that a PPR vaccination camp be held in Malar and Bindhani, another neighbouring village where cattle farming is the primary occupation. [Peste des petits ruminants (PPR) is a highly contagious — and economically disastrous — disease that affects goats, sheep and wild ruminants.] The veterinary doctor also diagnosed that the cattle in the region were falling sick due to the mid-afternoon peak heat under which they were left to graze, leading to symptoms like sneezing and upset stomach.

Jerky Orain is a young mother of a three-year-old son named Aman. She and her husband live in a village called Dighiya in Bero block of Ranchi, Jharkhand; and are expecting their second child. Agricultural labourers, despite weeks of hard work, the couple is about to earn a monthly income of mere Rs. 700.

When members of the Soochna Seva team met Jerky at an aanganwadi Kendra in Dighiya during a tikakaran (immunisation) camp, they learnt that Jerky had been deprived of various social security schemes due to an incorrect address that had been printed on her Aadhaar Card. The team then made it its business to help Jerky get a new Aadhaar Card issued, so that she could open a bank account and start receiving benefits under the Janani Suraksha Yojana, a safe motherhood intervention under the National Rural Health Mission (NRHM) to reduce maternal and neo-natal mortality by promoting institutional delivery among poor pregnant women.

Within days, Soochna Seva had collected the relevant documents from Jerky and submitted it to the authorities. Post a few follow-up sessions with them, Jerky had a new Aadhaar Card. She has now opened a bank account under the Pradhan Mantri Jan Dhan Yojana and has received benefits under the Janani Suraksha Yojana as well.

Soochna Sevaks turn into pillars of support for an ageing couple

Charo Oraon is 60-year-old man who lives in Bhandra village of Itki block in Ranchi, Jharkhand, with his wife, two sons, a daughter-in-law married to his elder son, and two grandchildren. He has a daughter, too, who is now married and lives with her extremely supportive in-laws, her husband and two children.

At home, things are not too good for Charo. Charo and his wife’s age are not their friends anymore. While he can’t move without the support of a walking stick, his elder son suffers from paralyses, his daughter-in-law has to take care for her husband and sons, and his younger son is an alcoholic who spends all his earnings on liquor. And so, the entire burden of the family lies on his aging shoulders. Though they are an agricultural family, they do not have too much land to claim as their own. Whatever little land they had, an acre of it was sold off at the time of his son’s marriage. The remaining land is not really profitable due to poor soil quality and lack of irrigation.

Some time ago, Charo happened to meet a Soochna Sevak who learnt of his ordeal and asked his wife to collate all relevant documents to apply for an old age pension scheme. Meanwhile, the team counseled his younger son and showed him the incentives of quitting alcohol. He’s not yet convinced but efforts are underway. The Soochna Seva team has also been providing information to Charo and his wife on what crops require less water than others, so that the couple are not limited to crops that can only been grown during the monsoon season while being left with nothing the rest of the year.

Etwary Orain is 62 years old. She lives with her family in Purio panchayat in Itki block of Ranchi, Jharkhand. She, her husband Lathu, her sons Birsa and Karthik, her daughter-in-laws Lalita and Susma are all engaged on their family land, trying to contribute towards the monthly household income. However, their small piece of land does not earn them profits round the year. In fact, crops sown are only sufficient to help them meet their ends for about six to seven months a year. The rest of the year, they work as agricultural labourers in others’ fields or graze their cattle.

For lack of awareness or lack of relevant documents, none of the family members — until recently had a bank account, due to which they were missing on benefits they could receive under the various social security schemes of the government.

A few months ago, a Soochna Seva team was mobilising community members in the village and making them aware of government schemes when they met the Orain family. The team showed the family benefits of opening a bank account and gradually, over the next few days, even helped them open bank accounts. Further, they were assisted in applying for government schemes for which they were eligible and informed about crops that they could sow for round-the-year harvest.