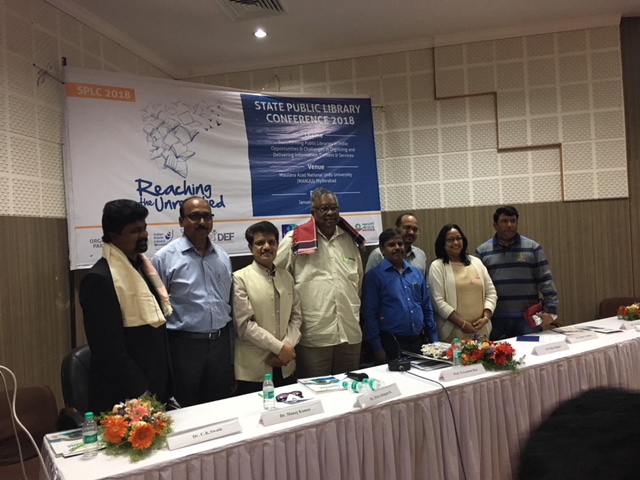 Public libraries in India, which have acted as the reservoirs, preservers and disseminators of knowledge for many years, are struggling to remain relevant and sustain themselves in the digital era. The public libraries have, especially, served well to the youth in smaller towns of India, who have limited resources to access knowledge. Our former Prime Minister, Shri PV Narasimha Rao utilised the only public library in Warangal district of Telangana then to educate himself and rise from a small town to achieve prominence in the Indian politics.

The Indian Public Library Movement (IPLM), supported by the Global Libraries initiative of Bill and Melinda Gates Foundation and hosted by NASSCOM Foundation, has been conceived to re-vitalise the Indian public libraries and bring them back into the mainstream as inclusive knowledge and information centres, catering to the 21st century information needs of communities across India. This movement is active in 23 states, 120 districts, and more than 200 public libraries across India.

And now, Digital Empowerment Foundation (DEF) is part of this journey. It has partnered with NASSCOM Foundation to implement IPLM in Telangana. Under this partnership, DEF is managing 13 public libraries in 10 districts of Telangana.

Every year, an Indian Public Library Conference (IPLC) is held, which witnesses the participation of more than 500 public library stakeholders from India and across the globe deliberating on various methods and ways to reach out to hitherto unreached segments of the society in order to build a strong knowledge economy using public libraries. However, demands and issues pertaining to the movement are unique to each state. Hence, a need was felt for the state chapter of IPLC that would focus on the development and progress of the movement in the respective states.

IPLM and DEF recently organised the state chapter of IPLC in Telangana in collaboration with the Government of Telangana and the Maulana Azad National Urdu University (MANUU). State Public Library Conference (SPLC) 2018 was held on January 18-19, 2018, at MANUU Campus, Hyderabad, Telangana, with the slogan ‘Reach the Unreached’.

With a defining theme of ‘Transforming Public Libraries in India: Opportunities & Challenges in Digitizing and Delivering Information, Content and Services’, the prime agenda of SPLC was to bring together and provide a platform to Telangana-based civil society, NGOs, library professionals, information professionals, corporates and academicians—who are contributing or could contribute to the development of public libraries in Telangana—to discuss, exchange views and experiences on various issues related to the theme of the conference.

The pace at which technology is evolving our lives, if public libraries have to truly remain relevant to the youth in the current times and future, it should adopt digital ways and means to become more efficient and effective as a knowledge preserver and disseminator. There is a need to rethink the sustenance model of public libraries. It cannot just depend on the funds provided by the government. Most often than not, libraries do not figure in the priority list of the government. So, the public libraries are always left scraping the surface for the left overs. It is important to establish alternate sources of funding such as CSR funds, crowdfunding and other community-based sources.

The importance of public libraries, especially for the middle and lower middle-class youth, in smaller towns of India cannot be emphasised enough. Communities have to consider libraries as an extension of their development. Hence, libraries cannot just remain as reading spaces. They have to be used more innovatively for recreational and self-development activities.

Many such pertinent topics were discussed, which saw a range of emotions from the participants from diverse fields. The conference ended on a positive note, with participating librarians, NGO representatives, corporate personnel, academicians, educationists, government representatives, politicians and students unanimously acknowledging the importance of public libraries, and agreeing to address the issue of revitalising the public libraries in Telangana on a war-footing.