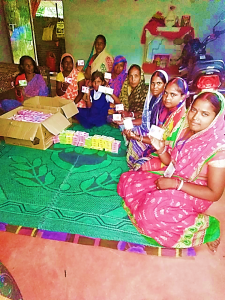 Krishna Verman is one of the most energetic, excited and enterprising women among the internet saathis of Panna district, Madhya Pradesh. In just six months, she had completed internet literacy trainings of more than 600 women and girls across four villages. Krishna is the resident of Ahirwa Kamp village, Panna. She has completed her higher education from her village.

Due to poor financial condition, her parents got her married soon. At her in-laws house, all are depended on the agriculture and daily wages to fullfill their basic needs. Krishna is the only one who is educated in their family. Being educated, she felt that she should help her family financially.

She joined a self-help group in her village. But because it was a new group, they had no idea how it works. Meanwhile she heard about the Internet Saathi program through a woman in her village. After enquiring about it, she was curious to join the training programme, especially, because she wanted to learn how to operate a smart phone.

She initially joined the two days training and learned how to use the smart phone and also how to teach the same to other women. After finishing her training, she began helping the women and girls (from 14 to 60 Years) in the allocated villages. Krishna helped to expose the women and girls to basic functions of a smartphone and the hidden wonders of the internet. During one of the sessions, she came up with idea of a self-help group which will be a source of income and can also help in creating their own identity in the village.

The self-help group led by Krishna after intense research started a business of making soaps. In the beginning, they faced many operational difficulties like making, selling and marketing. But gradually they started making 300 to 400 soaps a day of different fragrances like Chandan, Aelovera and rose and sold them to a nearby shop and to villagers. Now all the women in the group are earing around Rs 100 to 150 a day.

This further helped in spiking their curiosity to know things like making papad, wax candles, incense sticks, all from the internet to increase their daily income.

Krishna wants to spread this work to others three villages as well. She has already started promoting the idea of a “Home Enterprise” and motivating women to be independent.

She wants to all the women to be Self-reliant.